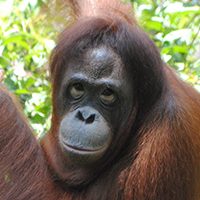 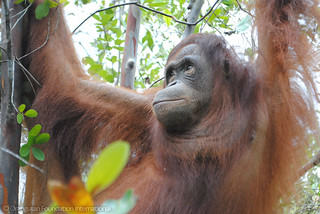 Karaba is a unique orangutan with her own distinctive expressions and mannerisms.
Orangutan facial expressions give hints as to their emotions at a given time. For example, playful infants will sometimes stretch open their mouths, almost like a yawn, just before playing a trick on a staff member or another orangutan. When Karaba drops her mouth wide open, it indicates instead a state of deep concentration. At these times, she will relax the area of her mouth, allowing it to be slightly open, with her bottom lip falling downwards.

Karaba’s capacity for sustained concentration contributes to a high level of sensitivity to her environment. While traveling at a furious pace and crunching leaves, she suddenly stops. Silent and completely still, only her eyes move, slowly scanning her surroundings. She has a highly-attuned attention to detail, whether picking at her hair and grooming herself, or making attempts to groom anyone else in her vicinity. She seems fascinated by nails and the cuticles that surround them. Comfortably perched, she studies her own hands for long moments, probing the ridged texture of her fingernails. 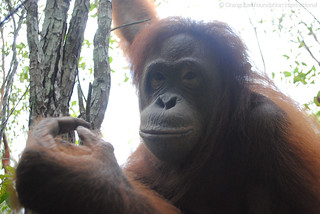 Karaba maintains a similar focus with enrichment activities. The orangutans at OFI’s Care Center are given specially designed packets made of leaves or woven rattan containing peanuts and other treats. Once the treats have been successfully extracted, most orangutans lose interest in the items. But long after her peers’ attention has subsided, Karaba can be seen peeling, snapping, poking, and arranging the enrichment materials time and time again to create new piles and formations. She also likes to collect ferns. She gathers them together, ensuring that all ends are lined up in an orderly bunch, much like a bouquet of flowers!

Even Karaba’s physiognomy is unique. She has an unusual disfigurement of her right foot, but is unhindered by the disadvantage. While all orangutans have their own style of climbing and moving from tree to tree, they usually differ from one another in speed or agility. Karaba, however, distinguishes herself by being one of noisiest individuals in the trees! She tends to catapult herself from one tree to the next, with large branches bending almost at right angles to compensate for her bursts of contact with them. Karaba’s arboreal passage can be easily identified by the path of broken twigs and branches she frequently leaves in her wake. 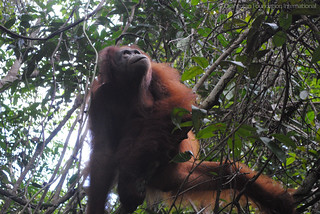 Conversely, Karaba can be extremely stealthy when she wants to be. OFI staff members quickly learned that if they cast their eyes down for a moment, Karaba might disappear. As a result, she is usually followed by two caregivers during forest school. Her curiosity drives her to explore further than most of the day-released orangutans, venturing to corners her peers have barely visited. This sometimes puts her at potential risk of ranging too far and encountering dangers she is not yet prepared to face on her own such as hostile or fearful humans. OFI staff Pak Yoyong and Pak Hansen follow her together, ducking under vines and climbing over fallen trunks to allow her to explore and gain strength, while ensuring they do not lose her in the matrix of branches in the canopy. For her part, Karaba still appears to appreciate the presence of the caregivers, despite being increasingly ready to live as a wild orangutan. We believe that she will soon be ready to go out on her own. 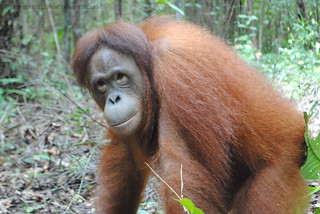 Karaba was recently relocated to the Orangutan Foundation International (OFI) Quarantine in preparation for formal release. She has demonstrated to staff that she is ready to face the tests of life in the wild. She has an expansive knowledge of the foods the forest has to offer, with a preference for Kalakai leaves. For both humans and orangutans these leaves have nutritional benefits and are particularly effective when an individual is ill. Karaba is also an impressive termite hunter. She pauses motionless on the forest floor and then suddenly bounds over to a spot on the ground to uncover a termite mound. With smaller mounds, she clasps them in her hand and brings the entirety to her mouth. Using her mouth and large lips she repeats the action of “suck, suck – pause – suck, suck – pause –” splitting up the pattern occasionally when she brings the mound to her eye to peer inside. 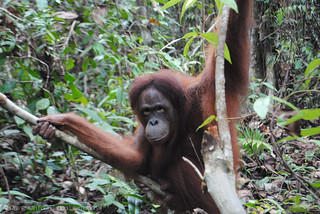 Karaba has also been building nests successfully. With her lip lowered and relaxed in concentration, she begins. First, she seeks out branches with leaves and carries them in her mouth to a secluded area. She places the branches carefully, creating a flattened pile, snapping branches in half if they extend too far beyond the edges of her construction. As the branches flatten and accumulate, a mat-like structure is formed. This creates a comfortable protection from the bites of ants and whatever else might be lurking under the brown and arid fallen leaves. She adds twigs to certain areas in piles of four and five. After her work is done, Karaba happily slumps down on her back into her creation. She sometimes finds an unused branch to use as a fan while she lies satisfied and content, cooling down after the activity. Lying on her back and looking up, Karaba is relaxed for a moment, leisurely swaying her wrist with the branch fan to create a gentle breeze. These breaks are usually temporary though, as she enjoys making two or even three nests during daily release, and doesn’t waste any time when there are endless corners of forest to explore!

For now, Karaba accepts the presence of human caregivers and entertains observation with a spirit of companionship. In this instance, human and orangutan are simply three individuals (as she is usually followed by two people), sharing the same day in the same forest, all hot under the morning sun. But Karaba does not belong with people, she belongs to the forest. The wild is her true home, where nests can be made and slept in the entire night, and where her meticulous habits will aid her in finding a wide array of seasonal forest foods. Karaba needs the forest for all the nutrients and materials for her survival, but the forest also needs orangutans who play a critical role in seed dispersal. Relying on the bounty of the forest, orangutans in turn steward the growth of Borneo’s forests. 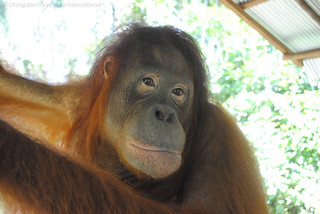 OFI is doing everything we can to provide opportunities for orangutans like ex-captive Karaba to return to the wild and continue the ancient interdependent relationship between orangutan and forest. But both orangutans and precious forest lands continue to dwindle. You have the power to work with OFI to help protect the forest ecosystems of Borneo. Through raising awareness and making donations, you can help OFI create a pathway back to the forest for Karaba and other orangutans.

Meet the Faces of the OCCQ