A Day in the Life at Camp Rendell 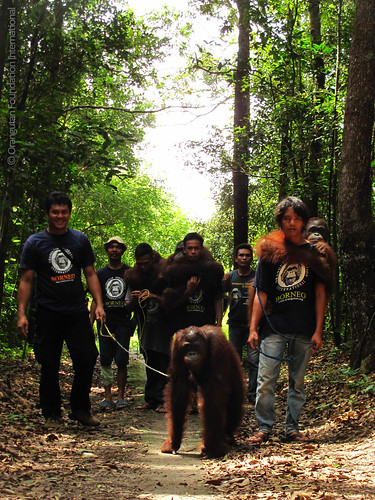 To keep the orangutans close together on release, each caregiver carries one on his back. When orangutans get too heavy, staff lead them by the hand. In order to protect the trees around the camp, ropes are loosely tied around the upper arms of the orangutans until they reach their destination.

Deep in the jungle, Camp Rendell is a place like no other, a haven ready to capture hearts and open minds to the beauty of the rainforest, the Dayak people, and the great apes who reside therein.

Camp Rendell was officially inaugurated in 2011 thanks to funds from very special donor friends of Dr. Galdikas, Mr. and Mrs. Rendell from New Zealand. The camp was built in the Pasir Panjang Village forest to provide additional space for daily release of a group of about 20 orangutans. The camp has been home to approximately 8 – 10 staff members and a rotating cast of orangutans over the past six years. As some of the original orangutans have been released back into the wild, younger orangutans have been moved in, taking their own next steps toward release.

Situated away from the local town, the camp is accessible only by motorbike or truck. Pulling up into the camp is like finding a hidden secret opening out from a dense jungle forest. With limited visitors, Camp Rendell is a peaceful place for orangutans and staff alike. Although there is a set routine –cleaning, daily release, feeding, tending to the vegetable patches– each day proves unique with the endless diversity of wildlife, experiences, and sounds in the forest.

Camp Rendell is too special not to share with the world, so to give you a bit of a taste for paradise, shade your mind from your current surroundings and bask here, in a day in the life. 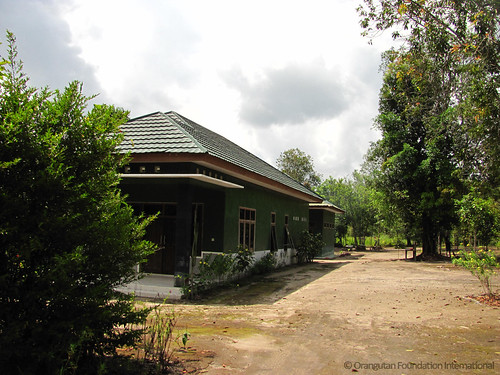 Waking up from a deep, peaceful sleep, the sun bathes the main Rendell building with light from the doorways and plentiful windows. A chorus of birds harmonizes with the gibbons in the distance as they wake in the trees and celebrate the coming of a new dawn. One by one the staff rouse themselves to meet the day. They stoke the fire to prepare breakfast, and take cold but refreshing showers. They call out the names of the orangutans, who are separated from the camp by a layer of trees about 100 meters away, to let them know that staff is awake and breakfast is coming. The trees are laden with fruit. From beyond the trees, some movement begins, along with a few lethargic grunts. Flashes of orange pass between the branches, and a curious eye appears here and there. The orangutans at Rendell are ready to start their day.

Once the staff have enjoyed a quick breakfast and dressed into their uniforms, the lip smackings and kissing sounds of the orangutans begin as they anticipate their breakfast. The staff faithfully bring fruit by the wheelbarrow to their orange friends, giving plentiful amounts to all, topping off the meal with buckets full of water to drink. 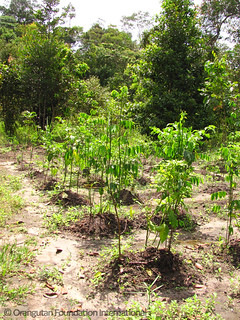 After breakfast there is usually a short interval during which staff play with the orangutans, sing to them and joke with one another, as they prepare for daily release into the Learning Forest. Water bottles are filled, waterproof cases stowed, and minds readied for the adventures to come. As forest school begins, one of the staff members stays behind to tend to the gardens and watch over the remaining orangutans. The staff grow a variety of food for themselves here, benefiting from the generous land that provides peace, shelter and sustenance to all who live here. 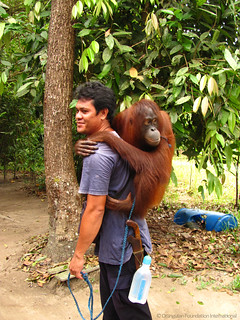 To keep the orangutans close together on release, each caregiver carries one on his back. When orangutans get too heavy, staff lead them by the hand. In order to protect the trees around the camp, ropes are loosely tied around the upper arms of the orangutans until they reach their destination. The staff seek out spots in the forest with large, lush trees for the orangutans to climb, and an abundance of naturally occurring foods. The walks to these areas are always an amusing sight. Some orangutans are so large that the view from behind is comically a giant orange ball with short human legs sticking out from underneath. Many orangutans will joyfully pluck at nearby branches in excitement, throwing the caregiver unexpectedly off balance. He, in turn, will mumble playful jibes back at his orange friends. 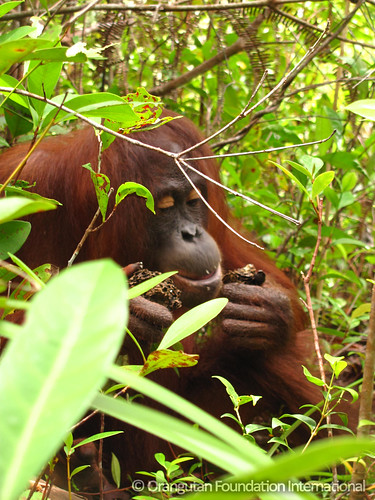 Once the ex-captives reach their destination deep in the Learning Forest, they are free to explore. Caregivers call to them every so often in a sweet voice, almost as if singing, to help keep them all relatively in the same area. Once settled, the staff begin searching for suitable fruits and termite nests. They give the orangutans simple clues to find the nearby edible goodies. Each orangutan starts a slow and deliberate search of the area that the staff has nodded to, until they eventually find the promised treasure themselves. 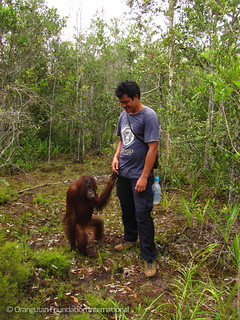 The coordinator of Camp Rendell, Pak Dender , has worked for OFI since he finished high school, motivated by a love for orangutans. He has spent most of the last six years at Rendell, and as many as double that at the OCCQ (Orangutan Care Center & Quarantine). It is plain to see the respect and love the orangutans have for Pak Dender. While more boisterous with other staff, the orangutans might only hold Dender’s arm for a short moment, finding comfort in the bond they share with this caring human, before they journey back up a tree to explore.

During daily release, OFI staff are there not only to follow the orangutans and show them where to find food, but also to serve as playmates…at least according to the orangutans! When orangutans want to play with their favorite caregiver, they will not take no for an answer. The next twenty minutes for this person will include having their strength tested as they are wrestled with, regularly having to retrieve sandals that go astray, and giving their orange friends a nice cool drink of water. 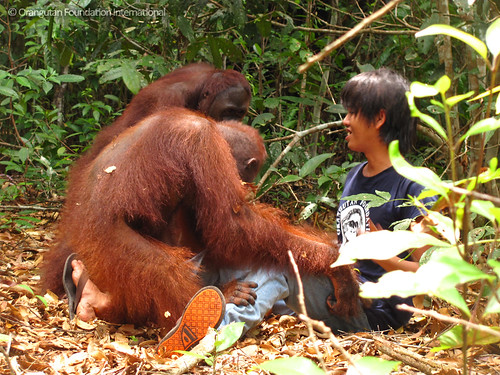 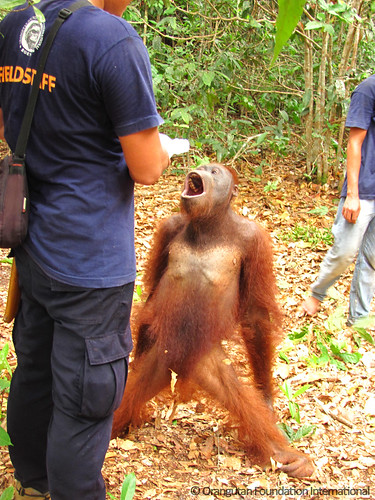 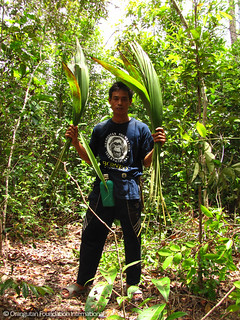 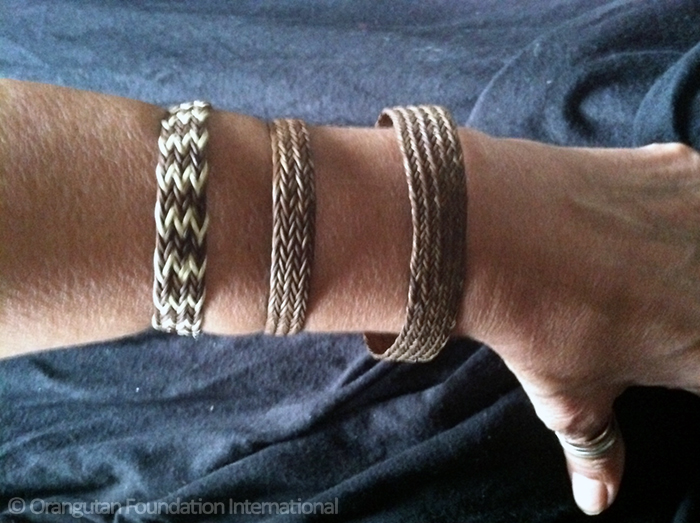 Staff are also on the lookout for particular plants. Passionfruit vines are often requested by the enrichment team at the Care Center. They collect an abundance of these, as well as beruta – a tough, black material found in the soft inner layer of a local fern. Beruta is used to make beautiful traditional Dayak bracelets.

After daily release, the orangutans return for lunchtime. Wheelbarrows of food and buckets of water arrive for all the hairy inhabitants of Camp Rendell. Staff take this time to rest, eat and laugh about the day’s activities.

Now that the work day has come to an end, some staff head to the nearby boardwalk leading through the jungle, to enjoy a moment of peace. The boardwalks were built by several groups of OFI construction volunteers over the years to enable staff to release the orangutans nearby for the day and to reach what was once a beautiful river. Once described as a sanctuary with a wealth of lush, primary forest, this river was a special place cherished by all who visited it. Since the adjacent bank was cleared to make way for palm oil, algae now covers the top of the water, killing off much of the aquatic wildlife and preventing staff and orangutan alike from enjoying the fresh, cool, healing waters that filled this small river. It is a sad experience for the staff but the magic of Rendell remains. 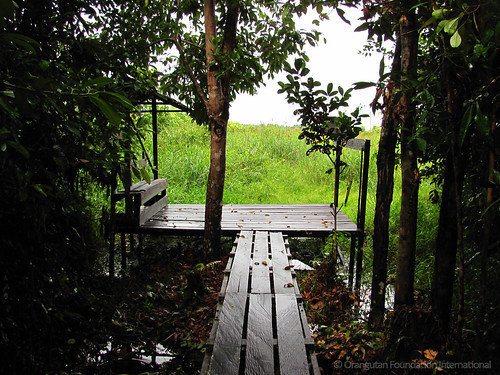 Come evening, the staff diligently collect an abundance of leaves and branches just before dusk from the forest to hand out to each of the orangutans who are now in their sleeping enclosures. Each orangutan, with his/her own unique and heartwarming personality, happily accepts these nesting materials. Orangutans gleefully swing branches around, flail branches from all available limbs, or with laser focus- settle down to arrange the leaves into a comfortable nest just as they would in the wild.

Looking upward from the porch of the main Rendell building, the sky turns from blue to a fiery pink-orange, then to a deep purple and finally to darkness. A melodious collection of wildlife call to one another and settle down in their respective areas to sleep. As the staff eat by the light of a fire and speak quietly in their rhythmic Dayak tongue, contented orangutans make soft noises into the night, settling in to rest before the next day’s adventures. Another day has come to an end at Camp Rendell. Each day brings the wildborn ex-captive orangutans, all orphans, closer to a permanent release back in the wild. 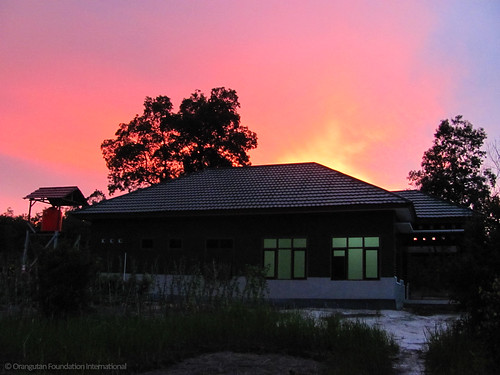