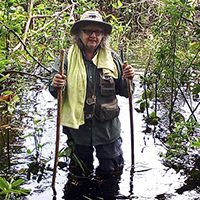 A large part of OFI’s work to save orangutans from extinction involves protecting the forests of Borneo. Orangutans must have a place to live.

Protecting the land is a big task, and it takes many forms. OFI works with the forestry department and police to coordinate patrolling efforts in Tanjung Puting National Park against poachers, illegal loggers and miners, arsonists and more. We purchase land before it can be sold to a palm oil (or other agricultural) corporation to be converted to plantations. We patrol the land we have purchased. We help negotiate legal status for protected land. We monitor the damage from the dry-season fires, which are more intense every year. We plant trees to rejuvenate the burned areas. When communities or individuals wish to sell us their land but do not have legal proof of ownership, we provide assistance with procuring the documentation. When individuals within a community dispute who owns the land, we help resolve the conflicts. And, as always, we continue to patrol.

But all of these actions start the same way: we must survey the land.

OFI staff undertake survey missions to ensure the piece of land in question is, in fact, in the general vicinity at which it was alleged to exist, to determine GPS coordinates of its boundaries, to place it on a map, and assess the biodiversity. The objectives may be simple but achieving them is far from an easy task when you are working in a place that is, quite literally, off the map.

In Central Kalimantan (Borneo), where OFI works, even accessing land can be a challenge. Much of the land we are surveying – particularly the forested land that has been offered to us for sale – is difficult to reach. Transit alone can encompass an all-day expedition. Roads good enough for cars can only take you so far. OFI’s Survey Team must leave the cars and, when they’re lucky, take off-road motorbikes for a stretch. When they’re not lucky, they’re on foot for miles. Sometimes boats are the only way in. Many of the streams are too small for speedboats. When the only option is to rent a small wooden canoe from an enterprising local villager, our team can only hope the retro-fitted engine (often borrowed from a motorbike) is in good repair.

Once they reach the land, the real work begins. In areas with extensive undergrowth (like the Rawa Kuno area of OFI’s Orangutan Legacy Forest), a man with a machete must be in the lead, hacking a path as he goes. Between one step and the next, the survey teams can find themselves in swamp up to their hips as the terrain changes underfoot with little warning above.

OFI’s survey teams are armed with cutting edge technology (drones powered by smartphones, handheld GPS devices) along with some of the oldest tools known to humankind (machetes and rope woven as needed on-site from vines). It’s the ultimate blend of old and new as OFI’s staff jerry-rig malfunctioning engines, identify the plants their Dayak grandparents taught them, read animal tracks on the ground and on the trunks of trees, spot orangutan nests in the canopy, draw diagrams in the sand with sticks to debate directions with the local accompanying the team, and collect aerial photography data with a drone in the sky.

After OFI’s survey teams return to the office, their work isn’t over as they must process the data they collected – most importantly, placing the piece of land on a map. These maps often only exist because of OFI and the years of survey work that OFI has done. The GIS data OFI has collected to identify landmarks in the region is combined with satellite imagery. The maps OFI staff have created contextualize the GPS coordinates and help in the negotiations about ownership, protection, purchasing, and conservation.

Surveys don’t stop once we have placed lines on a map. We need to know what’s inside those lines on the map, as well. It’s equally important to identify locations at which camps and patrol posts can be built, and determine if the area can be used as a release location for rehabilitated wild born ex-captives. We estimate the number of wild orangutans already living there, assess the fruit trees to see how much food they provide, and more. We continue with follow-up surveys to monitor the ecological changes in the region: deforestation and fire damage, on both the macro and the micro levels.

Surveying the land is vital to every piece of work undertaken by OFI.

It’s challenging, both physically and politically. Every step is a struggle. Many of the steps may lead to dead-ends. And it is never done. But with every sweaty step along the way, we are treated to beautiful scenery and breath-taking views both awe-inspiring and awful.

With our surveys, we watch the towns spread with octopus-like arms. We watch the expansion of the gridded plantations with their artificial lines and right angles – but we also get to glimpse the forests of Borneo as they were before.  When we’re lucky, having trudged in deep black water swamps, crawling along the streams that snake through the underbelly of the forest or flying with our drones near the clouds, we get to see a different view. We get to see the Borneo that the orangutans know, the one that they call home. The one that we are trying to save.

Saving Rosemary and ESRI: Returning to the Light!

Update From the Conservation Director