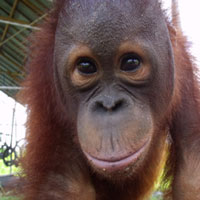 In the hectic hubbub of the Playpen facility, there is one orangutan who seems to have captured a true “Zen” attitude. Goran is a peaceful and sweet little boy who keeps to himself and maintains his calm and quiet character even during the busiest of days.

Goran is named for Goran Visnjic, the Croatian actor who replaced George Clooney in the popular TV series “ER.” Goran and his wife Ivana are fervent advocates of animal welfare and animal rights who have supported OFI and its Care Center and Quarantine over the years. To honor the Visnjic family, we named one orangutan “Ivana” (already released to the wild and currently pregnant). Once we got to know Goran Visnjic himself, we were very impressed by his quiet charisma. We named an orangutan infant who came to the Care Center as a tiny baby, “Goran.” It seems appropriate that the orangutan Goran reflects the Zen calmness and strength of his namesake.

The original human Goran in his Dr Luka manifestation.

The Playpen facility currently shelters thirty-six large orangutan infants, both males and females, ranging in age from three to five years old. Behind the small wooden structure, which consists of a kitchen, resting area, bathroom and night enclosures, are two huge playgrounds.

The orangutans are outside at this ‘Playpen’, as the playgrounds are often called, from early morning until late in the afternoon. Although it is always busy and bustling everywhere around the Orangutan Care Center and Quarantine (OCCQ) when the orangutans are out for the day, the Playpen is probably the most hectic facility of them all.

Maybe it’s their age, but the orangutans at the Playpen can be very “naughty” and interested in the possessions of their caregivers. Often when I visit, I am the focal point of a continuous charge of orangutans trying to steal my belongings, bite my feet (playfully), and pull my hair.

In the middle of this chaos is Goran, an independent and gentle soul. Although Goran is most often doing his own thing, whenever he comes close to a caregiver it is with an attentiveness and calmness that is rarely seen among others his age. Not frightened in the least, Goran moves his head slowly closer to the interesting person. Not biting, he softly touches the caregiver and searches for anything of interest. Not rushing away after his inspection is completed, he returns quietly back to the playground.

Goran is a captivating spirit, calming down whomever he approaches and interacting with the calmness and kindness of a Zen monk.

There is, however, one thing that will make Goran’s heart tick faster: food! Bananas, oranges, watermelon, milk, noodles, rice, young leaves, or anything he finds while playing outside, it all disappears into the ever-growing belly of Goran. Often times, Goran will be up in the playhouse with a hand full of snacks, just munching away, but if there is more exciting food being handed out by the caregivers, Goran will be first up front waiting for it.

Besides eating, Goran loves exploring. In the Playpen, Goran plays with everything. He enjoys walking on the ground – playing with balls, sticks, and tires – and also relishes climbing up and around, reaching for ropes, tires, and the wooden framework of the playhouse. As a matter of fact, Goran makes fantastic use of all the enrichment provided in the Playpen and keeps himself entertained for hours on end.

Goran is growing into an independent and self-reliant juvenile male without giving his caregivers much of a hard time. His calm, tender, and careful spirit makes him a very lovable and adorable orangutan. We hope that during Goran’s stay at the OCCQ, his independence and self-reliance continues to mature so that one day soon he may be released to climb trees in freedom in the beautiful wild rainforests of Kalimantan.

When it Rains, it Pours