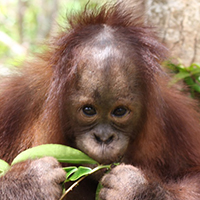 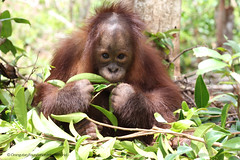 Everybody remembers their first house. Dreams are cast, plans are made and pennies are gathered until the jubilant day the homeowner wakes up in their new bed. Given that orangutans share so much in common with humans, they may look on their first nest with a similar sense of pride. One infant orangutan in OFI’s Learning Forest is well on his way to this milestone. Kuba, a rambunctious three year old, stands out with his advanced engineering skills. Recently, while his playmates were scattered around forest school, Kuba had been fixed like a yogi on the forest floor. Gathering fallen branches in one spot, he tasted leaves and bent shoots, testing their elasticity. His behavior was the precursor to one of the orangutan’s most identifiable habits: nest-making.

Nest-making is an art form, where orangutans bend pliable tree branches inward and then fit them together. Smaller branches and leaves are added to ensure a good fit and padding for the sleeper. Sometimes, several nests are made in one day, one for a mid-day nap or just for play. Nesting is a trial and error process, one that Kuba seems eager to learn. Lest we think Kuba is the quiet type, his absorption usually only lasts a few moments. Remembering he is in a playground, Kuba often sweeps up and flings his agile body onto the trees overhead, out of sight in a flash. 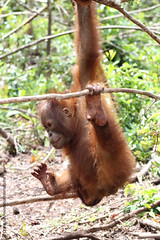 Most infant orangutans at OFI’s Camp Danielle show agility in the forest, yet Kuba’s athleticism stands out by a mile. At 9 AM, Kuba the intrepid ventures quickly into the forest while most of his playmates stick to the safety of the orangutan playground. Half-measures will not suit Kuba. Instead of being led by caregivers or walking on his feet and knuckles, he somersaults to his destination. Kuba swings, he slides, he jumps, he tumbles, he splashes, epitomizing the pure pleasure of being an orangutan; young and full of energy. Every vine and branch is an invitation to explore. In the seemingly eternal wet season of Kalimantan, Kuba is the first to jump into puddles. Or rather, somersault into them in his trademark way. His quizzical expression when water rushes over his little body is a precursor to mad splashing. Inspired by his curiosity, his friends always come over to the wet patch to explore with him. Soon they are coated in the peat of the Bornean jungle; temporarily safe from the prickly equatorial sun.

Baby Kuba was without parents, but orangutan mothers rarely let their infants out of sight. The pair may eventually part ways when the youth is roughly 8 – 10 years old. It is likely that Kuba was forcibly removed from his mother after she was killed. Some palm oil plantations have policies that include humane treatment of orangutans when they wander too close to plantation boundaries or into the plantations, but all too often orangutans are considered “pests” that must be exterminated by blowpipes, guns, or machetes. After he was captured Kuba was kept as a pet, surviving on a diet of mainly rice, noodles and vegetables. Water and milk were given to him regularly, and thankfully, he arrived at OFI’s Care Center robust. So far Kuba has not been sick since his arrival at OFI’s facilities, and has been steadily gaining weight.

With his boundless energy, it is easy to forget that Kuba is one of the smaller orangutans at Camp Danielle. His frame is comparatively slender, and his long face is delicate. Tufts of rust-colored hair rise from his head skyward, in a distinctive “V” shape, giving him an appearance that one OFI volunteer describes as “mad scientist.” The analogy fits. Kuba experiments relentlessly in the Learning Forest. His swinging skills are equaled only by his untiring search for a good playground tussle. Yes, Kuba is a born wrestler. If there isn’t a scrimmage to be found, Kuba will make one. From his perch, high up in the canopy of the Learning Forest, Kuba keeps his eyes peeled for his infant sidekick, Otan. Spotting his playmate, Kuba will swing down in a flash, grappling with Otan until the two merge in a rolling, flame-colored ball. Nipping and grabbing are done in jest, like in any playground, and one bout of playfighting stretches into many. Kuba is not always the victor, but he is persistent. Deterred temporarily by Otan’s swats, Kuba rejoins the tussle, teeth bared for effect, in a silent battle cry. He somersaults in and out of Learning Forest showdowns with obvious glee. Then, weary from a day’s vigorous play in the hot sun, a sweet innocence comes over Kuba’s eyes. The weary little warrior has more domestic matters to tend to, like nest-making.

Kuba’s searching eyes and fearlessness have endeared him to his caregivers and other orangutans alike. Although he may be one of the smaller infants at Camp Danielle, Kuba has made a name for himself. Most OFI employees immediately identify Kuba. His vigor and acrobatics are his hallmarks. “Actif” (active) coos his caregiver, when asked to describe him. OFI staff are confident that the development of their quick, and happy charge will remain on track. The future is bright for Kuba; may he go swinging into it full speed ahead.