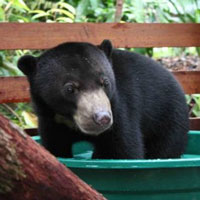 Although the main purpose of OFI’s Orangutan Care Center & Quarantine (OCCQ) in Pasir Panjang is to rehabilitate and care for orphan orangutans, there are a surprising number of animals that bear no resemblance to our red-haired primate cousins. Clearly, it is not only orangutans that are falling victim to the ongoing forest destruction and illegal pet trade in Indonesia. Providing care to sun bears, gibbons, macaques, and many other animals that arrive at the Care Center is not always easy or convenient for Center staff, but no animal is ever turned away. How could we refuse to provide shelter, food, and medical care to an animal in need? Recently a sun bear and a gibbon, both very young, were brought to the Care Center. Because of the nature of our facilities at the OCCQ, it is sometimes difficult for us to take in animals other than orangutans. In the case of the young male gibbon, this beautiful forest acrobat has clearly been heavily socialized into the role of “human pet.” Having likely been captive for the majority of his life, he shows a very strong need for constant human interaction. He will not eat food that is laid out for him in his enclosure, but instead will only eat what is hand-fed to him!

Despite his obvious attachment to humans, his hair and skin betray the neglect that he has, no doubt, suffered while in the clutches of the illegal pet trade. He appears to be suffering from sarcoptic mange which is being treated. It will take a lot of time and effort for the veterinarians and other caregivers at the OCCQ to nurse this handsome boy back to health.

At the Care Center there is an enclosure that was specifically designed for two gibbons that were taken to a gibbon rehabilitation program in another part of the province. Unfortunately, this enclosure has lately fallen into disrepair. However, where there is a will, there is a way. This old enclosure was no match for Indonesian creativity and building skills. In no time at all, recycled materials were used to bring the enclosure back into usable form. The Environmental Enrichment Coordinator, Ibu Maryanti, has provided the enclosure with tree trunks, ropes, shelves, and branches for this little forest brachiator, and now the “new” old cage is an attractive temporary home with plenty of climbing options for this little gibbon arrival. It is a beautiful sight to see this young boy climb, swing, and play. As soon as possible, we will move our gibbon to the successful gibbon rehabilitation program in the eastern side of our province. We love and respect gibbons but the rehabilitation of these fiercely territorial small apes require years of expertise and in-depth experience that we do not pretend to have. When the young sun bear arrived, we were confronted with another housing dilemma. With 330 orphan orangutans living at the OCCQ, we are currently beyond capacity. There simply wasn’t a usable enclosure available for this young male bear.

For several days after the bear first arrived, despite much brainstorming, no feasible housing solution could be found for this bear. One idea was to put the new young male bear together in the enclosure that houses our older handicapped female bear (who originally came to the Care Center when OFI bought and closed down the Pangkalan Bun Zoo in 2008). However, initial testing of this idea, which involved putting the young bear’s temporary travel enclosure next to the adult bear’s permanent enclosure, indicated that these bears did not want anything to do with each other. This brought the OCCQ staff back to square one concerning the bear housing dilemma.

One might say that the obvious solution would be to build a special cage for the bear, but, unfortunately, it is not easy to raise funds for a brand new cage when securing funding for the daily orangutan feedings is a full-time commitment for OFI. So until a new shelter could be found, the bear stayed in the transportation cage in which it was brought to the Care Center. Its small size brought sadness and a feeling of helplessness to the caregivers.

Luckily, the Care Center’s current enrichment volunteer, Kylise Hare, took it upon herself to organize fundraising and collect the money needed to construct a brand new cage for our new little sun bear. Because OFI is hoping to release (or transfer this young bear to a sun bear rehabilitation facility) as soon as possible, this newly constructed cage is specially designed so that it can shelter orangutan orphans in the future.

The young sun bear is enjoying his new surroundings enormously. I’ve honestly never seen such an active, curious, and happy bear in captivity. We hope that his new surroundings will allow him to grow and develop properly, so that, eventually, he too can be rehabilitated and released back into the rain forests of Borneo. The continuous arrival of new animals to the Care Center is a clear indication of the ongoing rain forest destruction in Kalimantan (Indonesian Borneo). As logging, mining, and palm oil plantation expansion continues to cause the destruction of wild animal habitat, the Care Center is seeing more and more new arrivals of all shapes, sizes, and colors. These animals are in dire need of shelter, food, care, and rehabilitation. Eventually they will also need safe forests in which they can be released.

As the number of enclosures and animal residents at the Care Center continues to grow, so too does the cost of providing the necessary medical care, food, and attention that animals at the Center need. It is because of the help of generous and committed individuals like Kylise Hare and Jessica Pearl Parker (who spearheaded the fundraising and construction of Hocky’s new enclosure and who also donated funding to the new sun bear enclosure), that OFI is able to make a difference in the lives of these orphan orangutans and other animals. Please consider being part of this difference by adopting an orangutan orphan, making a donation, or helping out in any other way that you can. If you are already doing this, we can’t thank you enough!

Helping Gibbons: The Story of Dea