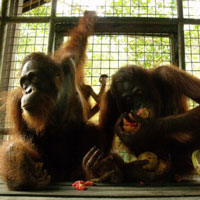 Protecting large areas of orangutan habitat is an incredibly difficult task. Even after an area has been designated a national park, or purchased privately for the sake of conservation, an endless amount of humanpower and resources are continuously spent to keep illegal loggers, miners, and poachers out of the forest. However, by hiring rangers to patrol and maintain guard posts in the forest, it is usually possible to keep the problem under control. What is impossible to control, however, is the destruction of the forests lying just outside of the borders of protected areas. Destruction of surrounding forests is a serious threat to the safety of the orangutans living within an established protected area. While enjoying the freedom of the forest any orangutan can easily reach the borders of the protected and safe area. Now that remaining forests in Borneo are so often bordered by palm oil plantations, an increasing number of orangutans end up wandering into these surrounding plantations. Here, they run the risk of being killed or captured.

Although many people see palm oil as much more valuable than wildlife and forests, sometimes responsible palm oil plantation managers contact OFI when an orangutan ends up at their plantation. This makes it possible for us to go and rescue the orangutan before the plantation operators take matters into their own hands. Recently, an adult orangutan with her biological infant and adopted juvenile son were rescued from a plantation and brought to the OCCQ.

Two of the orangutans, Owi and Enon, were ex-captives from OCCQ and were released separately. They had very disparate stories. Enon grew up at the Care Center while Owi was initially a very wild, newly captured orangutan orphan who kept trying to escape. After release, Enon became pregnant and gave birth to a female infant. In the meantime we had decided to take a risk and release Owi at a very tender age because we simply did not want to keep him in a cage. Owi and Enon met each other in the Seruyan forest after their release and they adopted each other and became as mother and son. Owi began following Enon wherever she went. Unfortunately, Enon’s adventures brought this unusual trio right into the kitchen of a palm oil company, where they energetically and happily turned the closets inside out and played with the kitchen utensils. Luckily, the palm oil company called OFI and so we were able to go and pick up these three orangutans. When Enon, her infant, and Owi arrived at the Care Center, Enon and Owi seemed inseparable and did not want to be brought to different night enclosures. This made our veterinarians decide to let them all stay together in the same enclosure where they could share their coconuts, fruits, drinks, and enrichment. But sharing is harder than it sounds for Enon, and she is consuming most of the food and enrichment that the three are given. It’s easy to see why Enon likes being around Owi: without any hesitation or regret, he gives her that which should be his. Owi is indeed a very generous and humble orangutan and makes sure that Enon and her little infant are not lacking anything. In fact, he is so generous that we must observe this trio closely to make sure that each of them is getting enough to eat.

Owi seems happy sharing his food with the bigger Enon, and he waits patiently until she is finished before moving in and eating the rest himself. While waiting, Owi likes to swing around in the enclosure, spin circles on his feet, or watch Enon’s little girl make small efforts to explore (she doesn’t get far though as the ever watchful Enon keeps a tight grip around her little legs).

The handsome Owi, with the soft and friendly eyes, the slow and humble movements, and the beautiful orange beard is quickly stealing the hearts of the OCCQ staff as he chooses to spend his time with Enon and her daughter , his adopted mother and adopted little sister.

While Owi occupies himself, Enon nurses her daughter, keeps an eye on the caregivers, or eats fruits. When looking at Enon’s face, we see a strong resemblance to those pictures we all know of early hominins. Enon’s expression is sometimes so human-like that it reminds us why Louis Leakey encouraged three women, Jane Goodall, Dian Fossey and Birute Mary Galdikas, the person who was most responsible for establishing the OCCQ, to study the great apes: to learn about human evolution and our ancestors. When darkness comes to the Care Center, Enon uses a burlap sack to create a small bed and crawls into a corner of the enclosure. After the bed is made, Owi lays down right next to Enon and faces his adopted mother.

It is a rare but beautiful sight to watch Enon and Owi as they are getting ready for the night with their faces turned to each other. While Owi’s eyelids begin to drop, Enon is still watching her infant as she goes on one last small adventure to the far corners of the enclosure. Soon this unusual family trio will all be sleeping peacefully together.

Enon, her baby and Owi have only briefly returned to the Care Center. Soon they will return to the wild at a release camp at a greater distance from palm oil plantations than before.

Your support is needed: Help us guard the forest.

Bintang: Star Orangutan of the Month