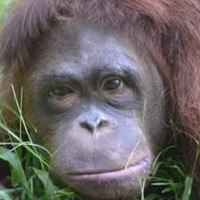 At OFI we enjoy the highs but we also must endure the lows. It is with a heavy heart that we inform our friends and supporters that after a short illness (non-Covid19 related) wild born ex-captive female orangutan “Hockey” passed away in her sleep. Thankfully, she was not alone as her faithful carer and nurse Ibu Emi stayed with her all night.

Hockey was an extraordinary individual. She lived with us at OFI’s Orangutan Care Center and Quarantine in Central Borneo for over 14 years and thrived, despite medical challenges that might have felled a less determined orangutan. She wanted to live so badly that she survived longer than most people would have predicted.

Sweet dear Hockey was well known and beloved by caregivers and OFI visitors alike. Now is a suitable time to celebrate Hockey’s life and reflect on the impact she had on those who had the good fortune to interact with her. Hockey’s tale is a remarkable one of quiet courage and determination. Hockey always made the most out of her days and represented a life well lived. We suspect that many individuals (and none that we know of) in her condition would not have survived as long as she did. Certainly, she was an orangutan like no other.

Hockey arrived at the Orangutan Care Center as an infant. She had suffered a stroke prior to arrival leaving her paralysed down the left side of her body and was prone to seizures. She had only minor movement in her right arm. Consequently, it was clear Hockey could not be rehabilitated for release to the wild.

Volunteers and OFI caregivers worked closely together to provide daily physiotherapy for Hockey, stretching her limbs so she could build strength in her arms and legs. Over the years Hockey built up enough strength to be able to sit up on her own and pull herself around her sleeping enclosure. Hockey was soon strong enough so she could hang onto her caregivers as they carried her for nature therapy into the Learning Forest.

Despite her disabilities Hockey’s mind was her greatest asset. All her senses – sight, smell, sound, taste and touch – were heightened. Her eyes continually shone bright and alert as they darted from left to right. She was well aware of her surroundings and never shy at entertaining visitors. Any who locked eyes with Hockey will attest to how they immediately fell under her spell and often pledged a lifetime commitment to her. OFI Australia went so far as to make Hockey one of their Fosters to help raise funds for her continuing care. OFIA President Kobe Steele went even further, regularly organising fundraisers and sponsored walks to raise much needed donations. She even visited Hockey regularly from Australia. With the support of OFIAustralia the Care Center hired a physical therapist from the local hospital in PangkalanBun to provide twice weekly therapeutic massages for Hockey. These sessions continued for years.

Due to the unique challenges Hockey presented, her caregivers organised an adjustable daily plan, based on Hockey’s energy levels. On quieter days caregivers sat with Hockey nestled peacefully in their lap as they brushed her hair or fanned her. Undoubtedly, the highlights of her days would be her trips to the Learning Forest. She was unable to follow her peers up into the trees but this didn’t stop her from being able to experience the world around her. Initially she was placed in a wheelbarrow and taken into the forest until a specially designed cart was made for her. With this she explored the grounds of the Care Center like a Queen in her chariot. She usually stopped by her subjects if she saw any, whether human or orangutan, for a quick wave before finally entering the forest.

In the forest she sat gazing up into the canopy, smelling the jungle and listening to the buzzing of tropical insects. She found fresh leaves and ran her flexible tongue (her other most utilised asset) carefully over each one. She discovered the world by licking trees, tasting the wind, and ingesting mouthfuls of mud and dirt (no harm done!) On days that Hockey didn’t venture to the forest when she was tired, caregivers used baby teethers topped with peanut butter, pineapple jam, honey and other flavors to satisfy Hockey’s need for tactile and taste novelty. Hockey enjoyed experiencing these different tastes and textures very much. These taste experiences and her forest trips kept her senses stimulated and active.

As the years passed by, Hockey’s condition worsened and she wasn’t as mobile as she once was. Unphased by this, Hockey settled into her new condition and embraced her “lady of leisure” persona. “Kong balls” hanging from the top of her enclosure swayed gently to catch her eye. A huge soft foam banana provided comfort and something for her to hug.

Hockey’s spirit remained undeterred. Not being able to sit up never stopped Hockey insisting on greeting passers-by and moving over for a closer look. She was always a gracious host. Regular visits, even for a short time, did her a world of good. Her enclosure became a place of quiet reflection, of openness and acceptance. One could visit Hockey, talk to her about the day, and get away from it all. Visits to the forest became harder but Hockey was still able to come out of her enclosure and lay down on the soft Earth. Her eyes gazed at the sky above, not wanting to miss a thing.

In Hockey’s later years Ibu Emi became her primary nurse and caregiver, always there to tend to her needs. They quickly bonded and became close. “I was with her every day, giving her stimulation and massages,” Ibu Emi recounts with delight. “The thing I liked most with Hockey is when I was close to her, she reached out and grabbed my wrist. It warmed my heart. Sometimes though she pushed me away after I stopped giving her milk because she wanted more.”

Seeing Hockey provoked a range of emotions from empathy, amazement, respect and kindness. Hockey inspired those around her to be better people by virtue of just being there. She will be very much missed.

Hockey may not be fully aware of the impact she had on so many but importantly she knew she was loved and cared for until the very end. Even the most discerning reader cannot help indulging us in the idea that now that Hockey is freed from this mortal coil, we can imagine her fully able to use her limbs and swing from branch to branch in eternity.