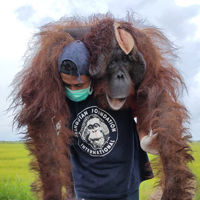 This year Orangutan Foundation International (OFI) and I entered our 50th year – half a century – in Borneo! We have made a huge difference and continue our vital work. One of our main efforts has been rehabilitating orphan orangutan infants whose wild mothers have been killed during the massive deforestation that is slaughtering wildlife in Borneo. This deforestation is demolishing one of the world’s largest tropical rainforests and affecting the world’s climate. OFI needs to escalate the fight because now we are dealing with new challenges.

In the past year OFI saw an increase in the number of wild adult orangutans in desperate situations. Wild orangutans spend 95-99% of their time in the forest canopy. As forests disappear, orangutans are forced to the ground where they are no match for people with weapons. Many local people regard orangutans as agricultural pests, as a source of infants for the pet trade, and as meat to eat or sell. People are increasingly encroaching on what was once orangutan habitat. Our goal is to rescue surviving wild orangutans, no matter how wounded or critically injured, from numerous human-orangutan conflicts.

Please let me tell you the story of the wild adult male orangutan Lintang. We rescued Lintang on the ground a few weeks ago near a palm oil plantation. He had a huge cut on top of his head, dead center. The open cut wound was inches wide, over six inches long and over two inches deep. OFI, working with the Indonesian Forestry Department, rescued Lintang using a blowpipe. Our indigenous Dayak staff are experts in the use of blowpipes and tranquilizer darts. Our experienced veterinarians always lead the Rescue Teams. They do health checks and treat wounds, if necessary, on the spot. Our OFI veterinarians were aghast at what they found when examining Lintang. Someone had hit Lintang’s head with a machete a day earlier. The wound was raw and wide open although the blood had congealed. The machete had penetrated to the skull. OFI veterinarians sewed up the wound in the field while Lintang was under anesthesia. Such a catastrophic wound, left untreated, might have eventually left Lintang dead.

Our experienced Rescue Team safely brought Lintang to our facilities where his wound continues to heal under the close watch of OFI veterinarians. Once Lintang’s wound is healed, he will be released to a safe, secure forest patrolled by OFI staff. Since Lintang’s rescue OFI has already rescued and released (after a thorough health check by our veterinarians) several other wild orangutans. Without our competent and compassionate veterinarians and the Rescue Team, the regular rescue and release of wild orangutans would not be possible. As the forest disappears, orangutans on the ground become “sitting ducks” for armed humans.

Among the many wild orangutans we have recently rescued, some were badly injured and needed lengthy medical care before release. For instance, one female had been blinded by shotgun pellets. Another has an infection of the bone which is taking months to heal. With the help of our precious donors, we have been able to carry out important work for the last 50 years. We have made a difference. But now OFI needs to expand our Care Center for treatment and temporary housing of rescued wild adult orangutans. We need to buy more supplies and medicine. A vehicle specifically for the use of the Rescue Team is also necessary.

Please help orangutans, forest ecosystems and Nature by donating today. The need is urgent. Together we can save orangutans, preserve their forest home, and give orangutans, one of our closest blood relatives, the life they deserve in the forest. By so doing, we can help save future generations of humans and orangutans.