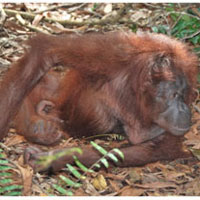 Hello and welcome back to the OCCQ! There have been many new and exciting enrichment projects this week and I would like to share one of the success stories with you. Sometimes, it is the simplest things that make such a difference in the life of an animal and with that in mind, let’s explore how some dedicated volunteers are making a difference for one special orangutan. 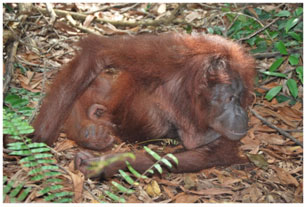 Ibu Maryanti and I are focusing on increasing physical activity and building strength in the orangutans, especially in those that have suffered from illness in the past. The Featured Orangutan of the Week is Hangki, a twelve year old female with limited use of her legs after a paralyzing infection in 2004 that occurred after she was released in Lamandau Wildlife Reserve.  Hangki also has an unidentified eye growth that limits the vision in her left eye.

An Australian volunteer named Dawn Perry, armed with her in-depth knowledge of Bowen Therapy, began a small physical therapy program for Hangki that is being continued by a long-term volunteer named Ruth Linsky. Hangki’s program was designed to increase the strength and flexibility of her muscles, which Ruth accomplishes through daily exercises and stretching. Hangki spends the majority of her time on her back, propped up on her elbows due to the weakness of her legs.

To encourage an upright posture, Ruth gently pulls Hangki upright by extending her arms and stretching Hangki’s back and shoulder muscles. Rather than picking Hangki up to take her out of her enclosure, Ruth makes Hangki pull herself onto Ruth’s back and hang on using her own strength. Hangki now enjoys daily trips to a large meadow and the forest at the OCCQ for both enrichment and exercise. To encourage physical activity while she is outside, Ruth walks around and hides food in the grass and in the trees, which stimulates Hangki to follow by rolling head over body after her. We had the most wonderful surprise yesterday when Hangki was able to pull herself up into a tree by gripping the lowest branches. Go Hangki Go!

Some of Hangki’s favorite activities when she is in the forest consist of foraging for ants, building small day nests, and staring through the trees at the sky. It is easy to see that even with several disabilities, Hangki is most at home in the forest and deserves a chance to experience the life of a wild orangutan. 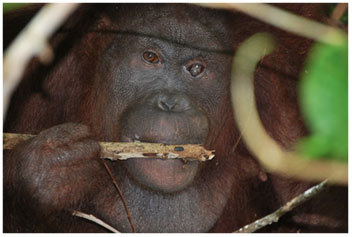 Ruth’s actions may seem minor to the casual observer but improvements in Hanki’s overall health are already evident! After just three weeks of work, Hangki is more responsive to physical and verbal attention. She vocalizes more often, is more interested in her surroundings, and is losing weight as she becomes more physically active. It is evident from Ruth’s work with Hangki that one individual can really make a difference in improving the quality of life for a captive animal. Ruth comments that Hangki has “a soul and personality that does not have a chance to shine when she is in a cage.” The personal relationship that Ruth has developed with Hangki is very special and Ruth loves the fact that Hangki associates her with freedom. In the enrichment program, we always wonder which species is being enriched, the human beings or the orangutans. In Hangki’s case, enrichment and fulfillment are clearly shared by both.