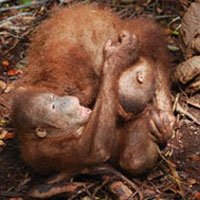 You can take the orangutan out of the wild but you cannot take the wild out of the orangutan. At OFI’s Orangutan Care Center and Quarantine (OCCQ), we strive to keep our orangutans as wild as possible so that they have a better chance of successfully surviving in the wild after release. One of the ways that we help to develop and reinforce key wild behaviors including foraging, food manipulation, climbing, and nest building is through daily visits to the forest. Known as “Forest School,” these trips to the 80 hectare forest surrounding the OCCQ are not only important for learning but are also a ton of fun for the orangutan residents as they experience a semi-wild existence for some hours every day.

Last week, I had the pleasure of going to Forest School with some of the orangutans from Pondok Sukun and it was a once in a lifetime experience. The orangutans from here range in age from three to five years. One can think of them as elementary school students who are beginning to assert their independence from mom and dad as they experience more and more of what the world has to offer. As we started off down the bridge towards the forest, it was apparent that Forest School is the highlight of the day for the orangutans. Although some calmly perched on the back of their caregivers, other raced off for the trees, throwing an occasional somersault and jostling their buddies to be the first ones out. It did not take long for them to reach the trees and tumble headlong into the main activities for the day. The more independent youngsters climbed into the highest reaches of nearby trees, foraging for wild foods as they went. Others catapulted onto the swampy ground underneath the trees, splashing through puddles and generally causing mayhem as they ripped up vegetation and joyfully rolled in the mud. For some hours, the forest was alive with sounds of orangutan enjoyment; the cracking of branches, the splashes of water, and the crunch of leaves indicated that they were exploring the forest, learning important survival skills, and having a darn good time doing it. I marveled at the climbing skills that several had already mastered as they gracefully moved through the canopy, knowing which branches would hold their weight and which could be used as aerial bridges when they were bent towards neighboring trees. It was wonderfully apparent that the forest was where these creatures belonged and that the rehabilitation program was preparing them for life in the wild.

As the morning waned, some of the older orangutans began constructing small day nests for rest during the heat of the day. Although their efforts were far from perfect, the nests were a definite start in the right direction of living as a wild orangutan. While the nest building was going on, others were foraging on aquatic plants, eating the succulent white tissue near the roots with lip-smacking pleasure. For those not as interested in such pastimes, it was time for wrestling matches in the mud with whoever wanted to join. The more timid orangutans avoided these matches but still showed their desire to romp by turning somersaults, jumping off low branches onto the ground, and throwing the nearest natural item up into the air. It was wild chaotic fun but more importantly, it is critical to the mental and physical health of these orangutans. How does one keep the wild in the orangutan? Simple! Take them to the wild! Take them to the forest!