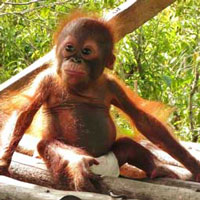 George Baru* is an amazing little guy. He has big expressive brown eyes that take in the world around him and a charismatic little personality that draws people to him. If he had a bit more courage, his curiosity would, no doubt, get him into a lot of mischief. But George is only nine months old. Give him time; the courage will come. Now George spends the majority of his time latched on to a caregiver, clinging around her neck with a fourhanded iron grip and getting very jealous if he has to share her with another infant orangutan. In that, George is a typical wild orangutan infant. They never share their mothers with anybody because the typical birth interval for orangutan females in this part of Borneo is eight years. (Twins are exceedingly rare.) By the time the new infant is born, the previous sibling is no longer suckling and no longer being carried by the mother. 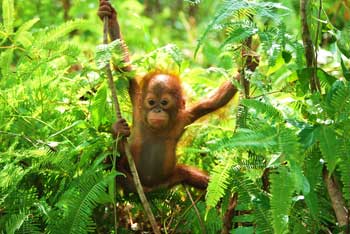 Here in the nursery at OFI’s Orangutan Care Center and Quarantine, most days are pretty similar for George. But that’s O.K. Orangutan babies like routine! In the morning when George first wakes up, he is bathed, his diaper is changed, and he is given a warm bottle of milk. Next, George goes to the nursery forest to play on the jungle gym, climb trees, and develop his growing repertoire of jungle skills. When George first arrived at OCCQ a few months ago, he didn’t have very much upper body strength. He is much stronger now and he enjoys playing on the jungle gym’s monkey bars, going back and forth, hand over hand, like a true brachiator. Recently, George has even taken to climbing up a rope in the nursery that suspends a hammock from the ceiling. He is also getting much better at moving through the trees in the forest, although he is still tentative and somewhat nervous. He’s surprisingly nimble, however, when he spies an opportunity to climb back into the arms of a caregiver. 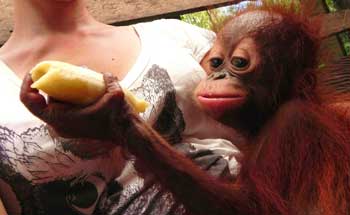 After the babies are all worn out from playing in the forest, it is time to go back to the nursery. For lunch, George gets a delicious warm bottle of milk and some fruit. He absolutely loves small bananas; you could say that he goes bananas for them. He isn’t able to peel them properly himself but usually won’t wait for a caregiver to peel one for him. Instead he bites right into the skin and then smooshes the inside of the banana out. It’s a very messy process and he usually ends up covered in banana mush with bulging chipmunk cheeks full of the fruit. Although he’s clearly full after 3 or 4 bananas, he’ll continue to eat bananas as long as they are being offered. 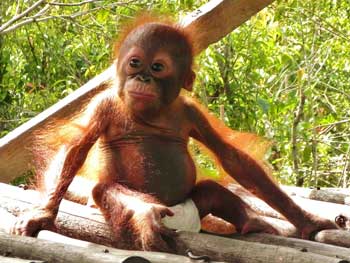 After lunch, it is naptime. George, however, is a fussy baby and sometimes won’t go down for a rest. Instead, he likes to be put into a basket with his best friend Jessica – another orphan orangutan infant at the nursery – and the two of them play and cuddle together rather than sleeping.

For dinner, George happily accepts his warm milk and gulps it down in one go. If George is served cold milk, he makes a face that says, “What were you thinking, giving me this?” and he won’t drink it no matter how hungry he is. After dinner, it is play time and then bed time. George sleeps in a big laundry basket lined with towels and blankets. Like most human babies, he still has trouble sleeping through the night – much to the dismay of the local nursery caregivers working the night shift. 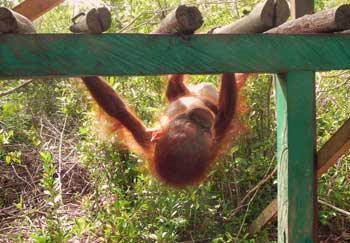 Since arriving at the Care Centre in June, George has been growing like a weed. He has grown into his bulging eyes and has developed a big round healthy baby orangutan belly – thanks to all of those bananas. As he gets older and stronger, he gets a little braver and a little less fussy. It is clear that infant George is doing well in the rehabilitation process. Slowly he is gaining the strength and confidence that he will need in order to live the life of an independent wild male orangutan. That time is still very, very much far off but eventually it will come. We will remember baby George as he is now and be amazed by the transformation.

* Note: George Baru (which means “new George” in Indonesian) was named after 2010 OFI Group One member George Krempl. Mr. Krempl expressed his relief that he won’t have to provide George Baru with a college education.

The Joy of Scent

EMPLOYEE SPOTLIGHT: THE DRIVERS OF OFI