Indonesia consists of approximately 17,000 islands, interspersed with warm seas, strung out along the equator between mainland Asia and Australia. Indonesia’s wet tropical climate is characterized by seasonal changes in rainfall rather than temperature. Warm waters, which make up more than 80% of Indonesia, are responsible for the almost constant temperatures on land. Seasonal variation in Indonesia’s rainfall is largely determined by the Asian monsoons. The word “monsoon” is typically associated with heavy rains, but in Southeast Asia, monsoons are weather conditions associated with seasonal shifts in wind direction. Typically, the northwest monsoon brings rain December through March, followed by the southeast monsoon which brings drier weather June through September. In the inter-monsoon seasons, winds are light and weather is more localized. This oscillating seasonal pattern of wind and rain is related to Indonesia’s geographical location as an archipelago between two large continents in the equatorial zone. 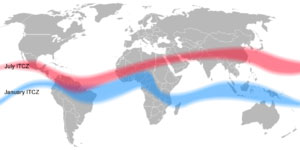 Indonesia lies within the inter-tropical convergence zone (ITCZ), a discontinuous belt of low pressure that drives equatorial weather patterns and is an important part of the global circulation of heat and precipitation.

The ITCZ forms near the equator where the northeast trade winds and the southeast trade winds converge in a low pressure zone. Early sailors named this calm zone the doldrums because winds are light. In the ITCZ horizontal air movement is very slight. Instead, in the ITCZ, air lifts up from the earth’s surface as it heats. Solar heating, from the sun’s intense radiation near the equator, causes air to rise through convection. This warm, moist air is transported aloft as thunderstorms develop, resulting in frequent rains. Regions in the ITCZ are some of the wettest on the planet, receiving precipitation more than 200 days a year on average.

The location of the ITCZ shifts seasonally as continental land masses change temperatures from summer to winter. In Southeast Asia, the annual migration of the ITCZ is associated with the monsoons which are responsible for seasonal variation in rainfall. In January, the ITCZ typically reaches its southernmost location which sets up the wet monsoon. Air masses from mainland Asia and the Pacific Ocean typically bring heavy rains to Indonesia November to March. In July, the pattern reverses as the ITCZ reaches its northernmost location. From June to September, high pressure over the Australian desert moves continental winds towards the northwest. During this dry monsoon, Indonesia experiences southwest winds and more infrequent rains.

Borneo lies nearly in the center of the Indonesian archipelago and straddles the equator. Borneo is the third largest island in the world and is transected by mighty rivers that flow from its mountainous interior into the warm seas that surround the island. Temperatures in Borneo vary with elevation but are moderated by the warm waters of surrounding seas. The mean annual temperature in Kalimantan (Indonesian Borneo) is 25º to 27º C (77º to 81º F). Borneo’s rainfall is heavily influenced by the Asian monsoons. The animated map below shows current weather systems across Indonesia.

Wet seasons in Borneo are sometimes variable. In Kalimantan (Indonesian Borneo), a long wet season generally occurs November through March and is characterized by steady winds and heavy rains from the north-northeast. A short dry monsoon season generally occurs June to September with light winds from the southeast. These winds are dry and produce hot weather, but during this time cyclones in the South China Sea create westerly winds from the Indian Ocean bringing unsettled weather with sporadic thunderstorms.

The inter-monsoon seasons are characterized by light winds and localized weather. The April/May monsoon transition is short and unpredictable in timing, duration and rainfall. A longer, more predictable dry season from July through September precedes the wet monsoon. During this time there are fewer rainy days and less precipitation compared to other seasons. There is also a daily cycle to rainfall in Borneo. Typically, clouds form in the late morning and early afternoon hours. Then by 2 to 4 p.m., the hottest time of day, convectional thunderstorms form and rain begins to fall. Often these late afternoon thunderstorms are brief and intense, dumping up to an inch of rain then clearing by sunset. 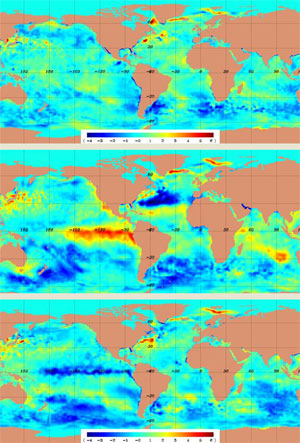 Large-scale weather systems can interrupt or intensify annual patterns of monsoonal rains in Indonesia. In years when the ITCZ does not migrate as far south as usual, droughts can occur. The dry season can be prolonged when continental high pressure systems slow the movement of the ITCZ.

Inter-annual climate variation is also influenced by El Niño-Southern Oscillation (ENSO) events. ENSO is a coupled ocean-atmosphere phenomenon that affects global climate. ENSO events occur when anomolies in sea surface temperatures (El Niño) cause shifts in typical pressure systems (Southern Oscillation) which in turn change patterns of trade winds and rainfall. The western Pacific Ocean, near Indonesia and Australia, has some of the world’s warmest ocean water compared to the much cooler eastern Pacific Ocean off the coast of South America. But, every two to seven years, strong westward-blowing trade winds subside, and warm water slowly moves back eastward across the Pacific, like water shifting in a giant bathtub. These warm waters carry rain with them, redistributing typical patterns of rain and drought, and affecting climate in many parts of the world.

The most recent occurrence of El Niño started in September 2006 and lasted until early 2007. In Kalimantan, extended drought caused seasonal brush fires to burn uncontrollably, blanketing the region in a smoggy haze for three months and destroying hundreds of thousands of hectares of rain forest.

Since June 2007, Indonesia has experienced a weak La Niña, the counterpart to El Niño. La Niña enhances easterly trade winds which cause warm, rain-enhancing ocean waters to pile up in the western Pacific around Indonesia. This La Niña climate event is responsible in part for the intense rains and flooding in Java in early 2008.

While ENSO is a natural part of the Earth’s global climate, changes in its intensity or frequency are likely to have important environmental consequences. It is not yet clear whether global warming has already led to such changes. We do know that in the past 25 years, El Niño droughts and associated fires have occurred every 2 to 3 years on average. This frequency presents a challenge to environmental managers.

Indonesia’s wet tropical climate has promoted the growth of one of the most extensive and diverse rain forests in the world. The annual shifting patterns of monsoonal rains and the inter-annual El Niño associated droughts have also given rise to the unique forest ecology of Borneo and Sumatra. Trees in these forests fruit seasonally, often during the wet monsoon, but only certain species and only some individuals participate in these fruiting events. Some tree species, especially in the Dipterocarpaceae family, only fruit once every four to five years, during what is known as a mast fruiting event, possibly in response to El Niño weather patterns. 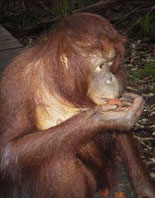 Variable and unpredictable fruiting in Malesian forests plays an important role in the ecology of orangutans and other fruit-eating animals. In order to manage in relatively fruit-poor forests, orangutans are sparsely distributed and do not live in social groups like other great apes. Orangutans, as well as other frugivores such as hornbills and bearded pigs, are adapted to tracking the irregular fruit supply over large areas. Orangutans in Borneo are also known to store fat during lean times and gorge themselves when fruit is abundant during annual and inter-annual mast fruiting events.

Indonesia’s unique climate is an essential part of this ecological picture. Orangutans and many other species are adapted to forests that fruit in response to Indonesian weather patterns that are part of global climate systems. Annual and inter-annual cycles of wet and dry seasons are essential for creating the food supply for orangutans and many other forest-dependent frugivores. Climate change could have a serious negative effect on orangutans and forests by changing the timing or abundance of fruiting and by facilitating fire and flood that destroys habitat.

Unless there is an extended drought associated with the El Niño weather phenomenon, every single month of the year receives rain. During typical years, two weeks do not go by during the year when there is no rain. However, as the El Niño weather phenomenon becomes frequent, probably due to global climate change, extended droughts grow more frequent with consequent changes in the flowering and fruiting patterns of the fruit trees on which wild orangutan populations depend on sustenance. In addition, the massive fires that sweep across Kalimantan during the more frequent droughts associated with changing climate patterns are destroying orangutan habitat, the tropical rain forest, and quickly bringing orangutan populations closer to the edge of extinction in the wild.

The massive fires of 1997 were among the worst ever recorded in human history in terms of forest decimated. At least one thousand orangutans died directly from the fires and many thousands more were negatively impacted as the fruit trees on which orangutans depend failed to fruit in the subsequent wet season. In addition, vast numbers of fruit trees were destroyed by the fires, leaving orangutan populations with a lasting shortage of food sources.

Understanding the links between climate and forest ecology is an important first step for directing conservation management. OFI is currently tracking rainfall, fruiting and orangutan density in Tanjung Puting National Park so we can better understand these relationships. OFI is also monitoring climate conditions during dry seasons, using satellite imagery to locate fires in remote areas of the park and training fire fighting teams to control burns as much as possible. OFI is also encouraging friends of orangutans and forests to do all that we can to stop global warming so that we can preserve the environment upon which all of us, orangutans included, depend.

Top 50 Things To Do To Stop Global Warming*

Global Warming is a dramatically urgent and serious problem. We don’t need to wait for governments to find a solution for this problem: each individual can help starting with little, everyday things.
For a list of 50 simple things that everyone can do in order to fight against and reduce Global Warming see: Top 50 Things To Do To Stop Global Warming

* © 2007 GlobalWarming-Facts.info – this content is shared under a Creative Commons License