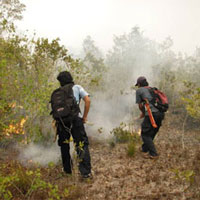 Most rainforests in Borneo and Sumatra, home to the orangutan, are distributed on peatlands which are typically low, swampy areas that are seasonally flooded. These rainforests are like no others in the world. Part of their uniqueness lies in their large capacity for storing carbon dioxide which is the primary greenhouse gas responsible for global warming.

Protecting these peatland forests is essential not only for saving orangutans and preserving biodiversity, but also for preventing massive carbon emissions that could contribute significantly to global warming. 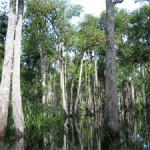 Like all tropical rainforests, tropical peatlands store carbon in the leaves, stems and roots of trees. Because of the rapid growth of trees in the tropics, tree biomass and the volume of carbon stored are higher than in temperate forests. Peatlands are unique because massive amounts of carbon are also stored in the soil itself as well as in the trees. Tropical peatlands have exceptionally rich carbon stores. All peatlands store carbon, but in the cold, wet peat bogs of Europe and northern Asia, peatlands store far less carbon per hectare than in the tropical peat forests of Southeast Asia. Tropical peats are thicker, some 10 to 20 meters deep, and the rate of carbon accumulation is much faster. Tropical peatlands and peat swamp forests are therefore commonly considered to play an essential role in global carbon cycling and what is happening to these forests constitutes an important factor in climate change.

Thirty percent of global peat is in the tropics, and Indonesia holds 60% of this, across an area of 22.5 million hectares primarily in the orangutan-inhabited lowland forests of Borneo and Sumatra. About 40 billion tons of carbon are stored in the soils and forests of Indonesia’s peatlands and peat swamp forests.

The vast carbon stores of Indonesia’s peatland ecosystems can only be maintained by preserving the forests and peatlands. When the forest is damaged or removed, carbon uptake is slowed or halted. Increasing amounts of carbon are then released to the atmosphere as exposed soil organic matter rapidly decomposes. Indonesia’s old growth forests are estimated to hold over 300 tons of carbon per hectare. 86% of that carbon is lost during “selective logging” which targets 5-10% of valuable timber trees for harvest, but which damages the forest and soil in a much larger area. 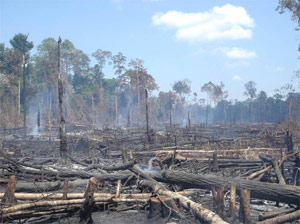 The establishment of palm oil plantations poses an even greater threat to tropical peatlands. In the process of opening up plantations, forests are cleared, swamps drained, and oil palm planted on a massive scale. The oil palms are planted for their oil-rich seeds which are harvested and used to refine palm oil which is heavily traded on the global market. Palm oil is commonly used in a variety of household products and foods such as soaps, shampoos, cooking oil, cookies, crackers and candy bars. More recently, palm oil has become an important source of biofuel, which is the primary commodity driving recent tropical deforestation.

A mature oil palm plantation holds less carbon than logged forest: only 63 tons per hectare (2.47 acres), and has a lifetime of only 25 years. Plantation development also causes massive releases of carbon dioxide through logging, draining, and burning of forests in order to rapidly and profitably clear land. Drained peatlands release much higher amounts of carbon than naturally saturated swamp forests because carbon can be oxidized more rapidly. Burning instantly releases carbon stored in trees and soil. In 1997, unstoppable fires burned across Indonesia, releasing an estimated 2 gigatons of carbon during this single episode. By comparison, this is double the amount of carbon emissions released on the continent of Africa (which is 15 times larger than Indonesia in land area) during an entire year. Peatland fires in Indonesia have contributed to Indonesia being the third largest emitter of carbon dioxide worldwide, after the U.S. and China.

Source: The World Bank and Department for International Development Indonesia. Report: “Indonesia and Climate Change: Current Status and Policies” May 2007.

No Legal Framework for Preserving Forest

Clearly, protecting Indonesia’s peatlands from further destruction is the only solution to preventing dangerous global climate change. Currently, there is no legal framework for protecting peatlands or tropical forests. The United Nations Conference of Parties set up a working group in 2005 which proposed awarding carbon credit to countries that reduce the rate of deforestation. Compensated Reduction is a voluntary scheme that could encourage Indonesia to reduce deforestation but peatlands are not addressed specifically and so far this system has not been implemented. There are plans to consider giving carbon credits for biofuel production, which could have dire consequences for Indonesian peatlands. The Indonesian government aims to expand their biodiesel industry, with plans to convert 20 million hectares of land to palm oil plantations. This policy is expected to increase the rate of deforestation and peat drainage, especially in Borneo and Sumatra, increase carbon emissions into the world’s atmosphere, and cause most wild orangutan populations to go extinct. 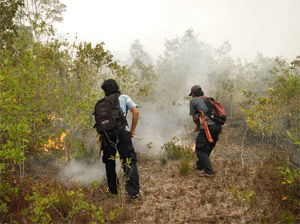 OFI’s current efforts to protect forest in Tanjung Puting National Park are essential for protecting one of the last major expanses of intact peatland in Central Kalimantan (Indonesian Borneo) as well as conserving one of the two largest wild orangutan populations in the world. The park covers 4000 km2 of peatlands. Much of this area remains undeveloped, with swamps and soils intact. About a third of the area has been deforested through uncontrolled and sometimes deliberate burning. OFI in partnership with World Education is working with villagers living in the vicinity of the park, to reduce uncontrolled burning through demonstration of alternate agricultural techniques. During the dry season, OFI fights fires in the peatlands to slow their spread and minimize the burn area. OFI’s GIS team monitors fire “hotspots” daily using online satellite imagery which helps field teams plan how to fight the fires.

OFI is also battling palm oil encroachment on the northeastern park border. Field teams have managed to stop illegal clearing and burning before major damage was done to the park. OFI’s local actions to protect the orangutan’s forest home in Tanjung Puting National Park are essential for protecting peatlands and peat swamp forests. This is an important contribution in the worldwide battle against global warming.