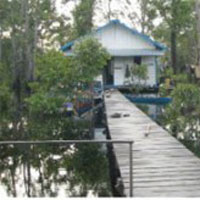 It may seem strange to think of tropical forests and swamps together… but not to orangutans who call peat swamp forests home. The flooded river networks of Tanjung Puting National Park and Lamandau Reserve are key components of forest ecology. Without them, forests and fruit would be distributed differently, and so would orangutans and other species dependent on these unique ecosystem.

Surface hydrology is the study of patterns and flows of all surface water including rivers, lakes, wetlands and oceans. A large proportion of the areas at Tanjung Puting and Lamandau are low-lying and include seasonally or permanently wet areas including coastal wetlands, swamps, rivers and seasonal lakes.1 What can surface hydrology tell us about orangutan habitat?

Rivers Beneath the Trees

Orangutans require forest that is sufficiently tall, dense and fruit abundant.2 Forest quality varies across Bornean lowlands, even among places that have not been disturbed by people, due to variation in important environmental characteristics such as hydrologic features. OFI has mapped major forest types at Tanjung Puting by analyzing satellite imagery. Dark green areas on the map are peat swamp forests which have the same dendritic (tree-like) pattern as the streams (Figure 1). Based on the land cover analysis and field surveys, it appears that land cover is tightly linked to variations in hydrologic dynamics such as the timing and duration of flooding.

Much of the areas at Tanjung Puting and Lamandau are comprised of networks of rivers and seasonally inundated swamps. In such wetlands, hydrology is known to be closely tied to ecology3 and instrumental in driving tropical peatland ecosystem dynamics.4 Surface hydrology then may form a key component of orangutan habitat.

OFI has conducted a new analysis on orangutan habitat at Tanjung Puting National Park to get a better understanding of the patterns of rivers and swamps that lie beneath the forest canopy. Models were created using GIS data and tools, and show promise for contributing to both scientific research and conservation.

Digital terrain data captures the elevation of the earth’s surface and provides the basis for surface hydrology modeling. These data are available for Borneo as part of the Shuttle Radar Topography Mission (SRTM), an international project led by the National Aeronautics and Space Administration (NASA) to build a global database of topography from satellite-flown radar.5 SRTM terrain data for Tanjung Puting is shown in Figure 2. ESRI’s ArcGIS software was used to conduct modeling using OFI’s existing GIS database and hydrology tools in the Spatial Analyst software.6

Next, flow accumulation is analyzed in order to assess how water will collect based on the flow direction model. Model output provides the basis for stream mapping. Streams are ordered by grouping cells into 5 classes of flow accumulation. This gives a more realistic-looking map of major and minor streams in Tanjung Puting (Figure 3).

Comparison of Model and Field Data

OFI’s field survey data for streams were used to evaluate the initial hydrology model (Figure 4). In this area the modeled river misses the actual Sekonyer River course in Area A but maps quite well onto the GPS location for the Sekonyer Kanan in Area B. Comparisons of such areas against SRTM terrain data, incorporation of OFI’s land cover analysis, and tests of different flow direction tools should enable us to “train” a new model to make fewer errors. Preliminary hydrology modeling shows promise for systematic park-wide mapping of rivers and other important hydrology features.

Existing field and satellite image data will be used to develop and test new hydrology models that more accurately capture water flow across the broad, gently sloping swamps and river floodplains at Tanjung Puting and Lamandau. Hydrology modeling is expected to produce important new datasets such as watershed boundaries and stream mapping as well as insights into ecological processes that drive ecology across large, inaccessible peat swamp forests.

Maps of rivers and streams derived from hydrology modeling will provide the best possible starting point for detailed field mapping of river networks during the wet season. Hydrology modeling will also provide information on how water flows through park ecosystems. Wet and dry seasons can look quite different in peat swamps where water levels may rise and fall by several meters. This has an important effect on tree and fruit distribution which are the key components of orangutan habitat. So, OFI’s continued research on hydrology is expected to provide important insights into orangutan ecology and conservation at Tanjung Puting, Lamandau and other Bornean peat swamp forests.

Arthropods of the Forest: Spiders