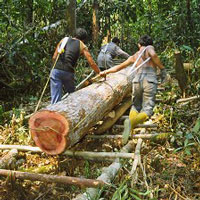 As I review my first year with OFI, I reflect on our many accomplishments and the challenges that still face us. We have worked steadily to build the organization’s capacity both in the Los Angeles office and in the field. This was made possible by your generous support and funding from our Chapters and the United States Agency for International Development (USAID).

A year ago we moved our office to the Harbor Building in Los Angeles. This new facility gives us the space we need for our work and room to expand in the future. Thanks to the generous contribution of Sheryl Osborne, we were able to furnish the office. To build on our fund-raising capacity, we hired Jim Dugan as Development Manager. He is helping implement our development strategy and is now responsible for managing all of our development activities. We are continuing to work on our communications pieces and will be delivering information to you via emails within the next few months.

Two years ago, in conjunction with Conservation International, we received a two-year grant from USAID. This allowed us to expand our efforts in forest protection and helped us improve our relationship with the administration of Tanjung Puting National Park (TPNP). We now have four standing patrol posts and protect more than 25% of the park.

Most significantly, in November 2002, thanks to the lobbying efforts of Environmental Investigation Agency, a letter was sent to Indonesian President Megawati from 12 U.S. senators, requesting her help in removing the illegal loggers from TPNP. In response to this request, in February 2003 the government of Indonesia deployed the military to the park – a strong signal to the illegal loggers and miners that their activities would not be tolerated.

The military operation, “Operation Wanalaga,” was hugely successful and may well be the most significant development to occur in the park in the last three years. The military cleared illegal settlers from the Sekonyer and the Natai Lengkeuas/Natai Tengah areas as well as further south into the Sungai Buluh Kecil. The effect of the military operation was immediate and effective: the Sekonyer River is much quieter, there are fewer speedboats, and no logs are coming out of the park via this river. No further chainsaws have been heard at OFI’s nearby camps or posts.

OFI has helped keep the illegal loggers out of the park. On my last visit in October, I saw no evidence of illegal activity in the park. This is in stark contrast to my visit in August 2002 when I observed numerous loggers moving logs out of the park for export (Figure 1).

We applied and received another two-year grant from USAID, which began on October 1, 2003. This grant will be administered in conjunction with a new partner, World Education (WE).

WE has co-developed over the past 16 years the successful and popular Farmer Field School (FFS) approach. The centerpiece of the FFS model are ‘experimental learning fields’ where farmers prepare, plant, maintain, and monitor the crop throughout the entire season/cycle of the crop. Field observation, recording, and analyzing data are combined with instruction.

The experimental fields serve as the ‘textbook’ that farmers construct throughout the FFS. The skills that farmers learn in the FFS – critical thinking, data collection, data analysis, problem solving, resource management, time management, and group working skills – are cornerstones to participation in natural resource management, improvements in health and nutrition, and the management of community affairs. The belief is that once the farmers in the surrounding communities have obtained food security, that the need to illegally log the park will diminish.

The USAID program will introduce effective co-management of the park through two main strategies. One is to continue and expand the system of park and community patrolling efforts that will decrease illegal logging and mining activities within the park boundaries. The other is to improve ecoregional planning by enhancing planners’ use of data in decision-making, as well as by facilitating multi-stakeholder forums to address conservation and development issues. A geographic information system (GIS) database will be used by key stakeholders for better decision-making as well as for improved monitoring and evaluation. The eventual goal is to better integrate land-use planning with local economic and conservation needs. Our goal is to protect more than 40% of the park by the end of the grant period.

Your continued support of our orangutan and forest protection efforts will help us ensure that orangutans always have a home in the wild.