According to our current knowledge, the orangutan (Pongo pygmaeus) was the first great-ape species to split off from the evolutionary tree that led to modern humans. This happened about 14 million years ago (Goodman, 1999). In searching for the origins of human cognition and human language it is therefore imperative to gain knowledge about the cognitive and communicative abilities of this species. This includes the study of the intentional use of communicative signals like gestures and vocalizations in social interactions.

In captivity, orangutans have been observed using a wide range of visual and tactile gestures (Liebal, Pika, Tomasello, 2004), but there is always the danger that some of these were copied from human caretakers or visitors. In order to exclude this possibility, observational data from wild orangutans are needed. Except for MacKinnon (1974), the study of gestural communication in wild orangutans so far has been neglected, as their mostly solitary nature was assumed to result in a very limited gestural repertoire. Moreover, their extreme shyness in conjunction with their arboreal habitat make the observation of these great apes a painstaking task.

In August 2004, I conducted fieldwork in the National Park of Tanjung Puting, under the auspices of Dr. Galdikas and with the invaluable support from her team at Camp Leakey. Observational data were collected on whole-day follows. Three mothers with their offspring were followed for four days each. Data recording was done with a digital video camera which also allowed capturing interactions occurring high up in the tree canopy between individuals either unaware of or at least ignoring the observer. All observed individuals were wild, i.e. non-rehabilitated, so as to exclude possible human influence on their gestural repertoire. The observed individuals nevertheless were habituated to humans and therefore allowed close observation and extended follows. 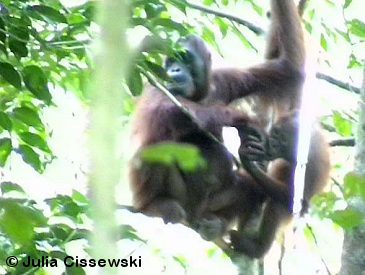 The video data collected are currently coded in order to facilitate statistical analysis. The coding scheme used is based on Liebal, Pika, and Tomasello’s (2004) analysis of gestural communication in captive orangutans. In this way, a direct comparison of the results will be made possible. Since data collection and analysis are still in progress, no final conclusions can be drawn at this point. Nevertheless, first impressions suggest the existence of a variety of conventionalized gestures used for intentional communication. A second fieldtrip in July/August 2005 should provide further data collection in order to complete a representative sample for reliable statistical data analysis.

Continuation of this work will hopefully contribute to a better understanding of the gestural repertoire of one of the last wild orangutan populations in the world. 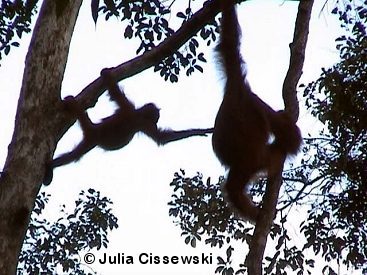