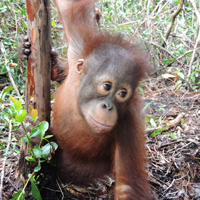 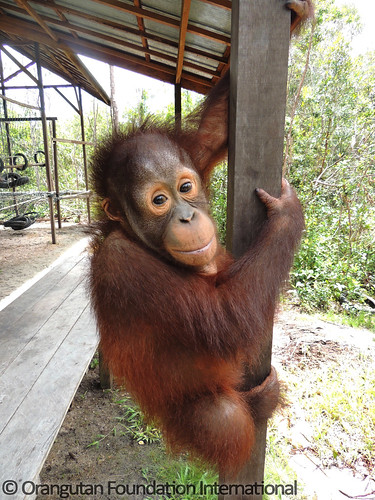 To look at Ray is to look at a vision of tranquility. He radiates serenity in the midst of the seemingly frenzied orangutan infant playground at OFI’s Orangutan Care Center and Quarantine in Pasir Panjang, Kalimantan. Ray is only an infant, and yet he seems wise beyond his years. Often when I am sitting and observing the infants at play, I will feel a presence close by and find Ray next to me. He will stare into my eyes and I wish that I could interpret the secrets that he is trying to communicate to me.

Ray first arrived at the Orangutan Care Center and Quarantine (OCCQ) as a tiny, helpless one month old infant. Now Ray is thriving, healthy, and active. Ray is still one of the smaller infants under OFI’s care and is looked after at the special newly built infant facility, Pondok Danielle. He might be small compared to the older orangutans who temporarily call the OCCQ home, but among his infant peers Ray is now one of the biggest. Although he has size on his side, he is never rough with the smallest infants and recognizes that they are not good playmates. Often Ray can seem older than he really is but if something spooks him, he will cry for his caregiver a sign of his youth and dependence on a “mother” figure. 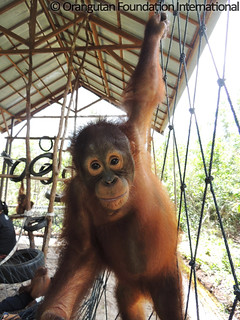 Yet, with his gentle and reflective personality, Ray can still be surprisingly cheeky too. He very much enjoys the times when his caregivers are cleaning his sleeping enclosure. Ray uses this as an opportunity to get in the way as much as possible! Ray will try to steal the hose or swing in the way of his caregiver with a mischievous twinkle in his eye. However, even when he is feeling rowdy, Ray approaches gently and never attempts to snatch food. Ray is also an acrobat and loves to hang from the roof beams of the infant playground upside down. Holding on by his legs, Ray will drop down with his hands hanging down, wanting to hold your hand or to playfully pull your hair. Ray has two best friends, Larry and Vytas. These young male orangutans have been friends since the day they first arrived at the OCCQ. When I first met the ‘three musketeers’ they were all tiny, shy, and covered in fluffy, bright orange hair. Now these three have grown and more readily engage in play. Ray, Larry, and Vytas all share a sleeping enclosure together and each night curl up together to sleep, reassuring each other that all is well.

Though he has his friends, during daily playtime at the infant playground Ray can often be found climbing high on his own. When he rests, he really does appear to be meditating as he gazes off into the forest. Yet a curious change comes over Ray when there are new people around. Suddenly, Ray becomes bold and vivacious. Gone is his quiet nature! Ray will begin to throw himself at the newcomer, swinging energetically and climbing all over him/her. By contrast, Larry and Vytas who are normally the life of the party, fade into the background and become shy. One day Ray was acting so bold and brave that in his effort to show off, he inadvertently slapped me across the face! Realizing he was being too boisterous, Ray climbed down and put a hand to my face and gazed into my eyes, his way of saying sorry. Reassured by a tickle and a smile that I was not angry with him, Ray bounded away, continuing to show off. 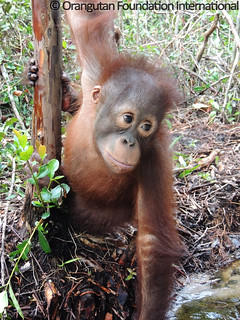 Ray is growing into a serene and social orangutan. With his best friends Larry and Vytas, Ray is content to play and cause mischief. But he will also take quiet moments for himself. In years to come, Ray will learn essential forest skills that he will need for his return to the wild. For now, Ray continues to showcase his impressive acrobatic skills and tries to pass on the secrets of the universe through his large brown eyes whenever he catches someone’s gaze.

A New Home for Gulu Gulu