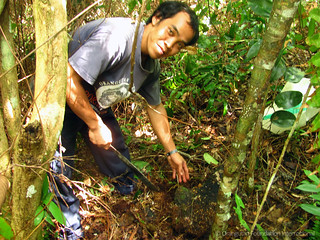 At the Orangutan Care Center and Quarantine (OCCQ) kind and strong Pak Santo has taken responsibility for the care of the Malayan sun bears which now reside at OFI’s Orangutan Care Center and Quarantine in Central Borneo. Pak Santo began working for OFI in 2014, traveling from his home town on the eastern side of Tanjung Puting National Park for the opportunity to work with wildlife.

As a child, Pak Santo ventured into the forest with his friends, relishing the subtle noises of the jungle and the soft light that would stream through the leaves. At the time, the primary rainforest around his house was immense – deep, mysterious, and magical. Playing with his friends and walking through the forest, Pak Santo would sing along with the birds. Sometimes Santo and his friends would come across sun bears. While his friends kept as much distance as possible, Pak Santo quietly and slowly moved towards these great creatures wanting to see them from a closer perspective. Once he started working with OFI he became transfixed by the incredible personalities of the bears under his care as well as their strength and usual gentleness. He felt a strong pull to work closely with these animals and enjoyed being in a forested area that provided the natural shelter and peace he enjoyed as a child.

As a young man, Pak Santo had a job driving a fruit truck, but spending long days on the road did not provide him with the same deep nourishment he had received from nature all of his life. He felt something was missing and longed to return to the natural world. When the opportunity arose to work directly with sun bears at OFI, Pak Santo immediately spotted his calling and jumped at the chance to change the direction of his life. 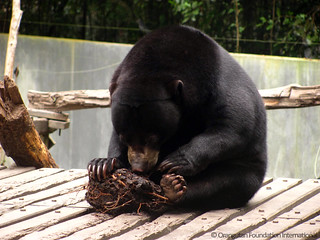 Santo was initially hired to help with the rehabilitation of two young sun bear cubs at one of OFI’s forest release sites in the depths of the forest. Here he lived and walked with the cubs on a daily basis. Santo flourished in the position and loved to spend each day in the forest walking with the cubs. His dedication was unwavering, despite rustic living conditions and long days often with little rest. He worked with two cubs, trying to get them back into the wild. Bear rehabilitation is a difficult process and only one of the cubs was possibly rehabilitated at that time. She disappeared in a rain storm but was already quite independent. She had occasionally separated from her human “walker” before then and had foraged on her own.

After many months in the forest, Pak Santo was transferred to the OCCQ to work with the seven juvenile and adult sun bears there. Aiding in the husbandry of these bears with other OFI staff, Santo learned about the electric fencing of the enclosures, as well as how to feed them, clean their enclosures and prepare enrichment for the bears. In his first few months, Santo was actually quite nervous around the sun bears. While he enjoyed getting closer to these bears in the wild, he was not accustomed to being this close! This was different from walking with cubs in the forest. Being very sensitive to the animals’ behaviors, Santo could also tell that the bears weren’t exactly welcoming him into the group. But after weeks of consistent closeness to the bears, feeding them, and cleaning inside and near their enclosures, Pak Santo became a trusted caregiver with a familiar smell. (Sun bears rely heavily on their keen sense of smell to detect other animals, people or food nearby.) Undoubtedly, his patience, respect, and love for the bears was also keenly felt.

Santo is now the primary caregiver for the seven bears at the OCCQ. (Another 4 bear cubs are in the deep forest being rehabilitated by other OFI staff.) Santo’s patience, respect, and love for the bears shines through all his work. Each day for the bears’ breakfast, he fills a large wheelbarrow full of fruit he has meticulously picked out, ensuring the fruit is ripe and good enough for his seven charges. After opening the fruits with his machete, he visits each enclosure to hand the bears their breakfast,all the while singing to the bears in a low tone, softly speaking their names, and laughing as they delight in their morning meal. 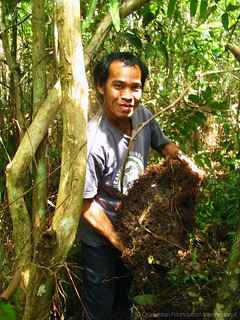 Day in and day out, Santo visits the enclosures numerous times, preparing feedings three times a day, cleaning out the enclosures with a spade and hose, and giving the bears refreshing showers. He will also venture into the forest as often as he can to find termite nests and juicy dead logs filled with tasty treats which he will bring back to the bears. (Please see photos.) Santo’s daily tasks are numerous and diverse as he strives to ensure the bears are always content and stimulated. When he deems it safe to do so, Santo sometimes even enters the enclosure to interact and play with the bears.

In between all of this, Santo somehow finds time to help other staff at the Care Center when they need a hand looking after orangutans. He is a remarkable and caring individual. By simply being dependable every single day, he has built strong bonds with each of the bears. The sun bears have come from difficult and traumatic lives before being rescued by OFI. Pak Santo is now their rock, someone they can trust to look after their needs thoughtfully, consistently and with great love.

Charlie: Charming Orangutan of the Month