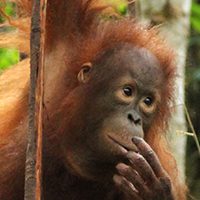 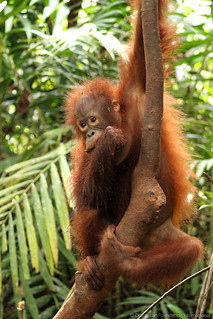 Andrena’s appearance and personality captivate. At first sight, her long, plentiful hair gives the illusion that she is twice the size of her peers at OFI’s Orangutan Care Center and Quarantine (OCCQ) in Central Indonesian Borneo. Her richly-coloured hair seems to flow in all directions, accentuating a certain wild essence in her personality.

There is always excitement in the air when the ex-captive, orphan orangutans leave their sleeping quarters and head to forest school in the morning. Andrena is so eager to explore that she cannot be restrained and runs to the trees. Alert and energized, she scans her surroundings until she spots a tree she wants to climb. Once she is in the canopy, her speed does not slow down. Rather she transfers to quick, agile leaps from one vine or branch to the next. Always busy and on the move, Andrena’s next activity might be building a nest for herself.

Andrena is drawn to the freedom of moving high in the canopy, but she is also keen to explore the lower levels of the forest as well. While hanging by one arm onto a vine, she pushes off a tree trunk to swing out into the air. Using remarkable strength for such a little “girl”, she swings with momentum for a long moment before, in a single movement, she releases her grip and falls to the forest floor below. When she is in a playful mood, she sometimes repeats this activity over and over again.

When forest school has ended for the day, Andrena’s name reverberates in the forest as her caregivers call out to remind her that it is mealtime. After hours of independent play and exploration, she just can’t peel herself away from the trees she loves so much. When she finally comes down and hops into the arms of her caregiver, it becomes very clear how young she actually is. She holds onto her caregiver’s clothes with a grip that seems significantly tighter than that of some of her peers. This points to a paradox. However independent little Andrena seems to be in the trees, once she is on the ground she shows great dependence on her caregiver just as she probably would have shown to her own mother in the wild had her mother not been killed and infant Andrena ripped off her dead body.

Andrena is a sweet, friendly little orangutan who occasionally plays with other infants such as Bayat but much of the time Andrena prefers to be on her own in the trees. Although she moves quickly, she also seems careful and alert to all that surrounds her in the canopy.

Andrena’s independent personality, while gentle and calm (except when she is vigorously swinging and jumping down from the tree tops!), reflects behaviour natural to wild orangutans of her own age. Like her wild counterparts, she usually seems alert. While she is exploring the lower levels of the forest near the ground, loud and sudden noises send Andrena straight back up into the trees. She is similarly apprehensive with human strangers. Her trust toward her caregivers is, thus, all the more remarkable and a testament to their steadfast love and support. Their careful and loving attention has helped Andrena grow in confidence and enabled her to become the lively youngster that she is now. We have high hopes for Andrena’s future and hope to help return her to the wild once she becomes older and matures into a lovely active adolescent.

Orangutan of the Month: Dynamic Piko