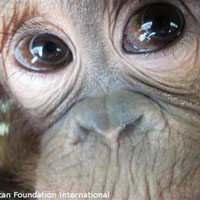 I have chosen Uttuh (pronounced “oo-too”) to be Orangutan of the Month for one simple reason: her eyes. Really they are little different from the eyes of any other infant orangutan at the Orangutan Care Center and Quarantine (OCCQ) except for dazzling white rings that circle her irises. Her eyes are absolutely stunning. So is Uttuh. At one year of age, Uttuh has not quite developed her full personality yet but she is well on her way. A gentle character paired with a beautiful face make Uttuh hard to resist by humans with emotions. When I visit Uttuh, I can tell right away that she is different from her closest friends. While they are still shy and a little scared of unfamiliar people, Uttuh is the first to reach out and connect with me. She is also the first orangutan who I have truly made smile – how could I not choose her as Orangutan of the Month?

Uttuh arrived at the Orangutan Care Center and Quarantine (OCCQ) this year. She was rescued by an Indonesian wildlife organization from a palm oil plantation where her mother was being chased with sticks. The story is that Uttuh’s mother was so terrified that she had no choice but to leave Uttuh in the middle of the plantation road. The probable real story is that Uttuh’s mother was killed. When Uttuh arrived at the OCCQ, she weighed only 3.5 kilograms (8 lbs). She currently weighs 7.5 kilograms (16.5 lbs). With the fate of her mother unknown, Uttuh is utterly dependent on the care given by OFI. Infant orangutans spend the first four years of life clinging to their mothers. Once juveniles, orangutans spend the next four years not far from their mother’s watchful eyes. Uttuh will need to be with her new “mother” for many, many years. By the look on Miss Tika’s face when she holds Uttuh, I don’t think she minds. Uttuh and her friends all have new “mothers” at the OCCQ. “Mothers” who bathe them, feed them, play with them, teach them, cuddle them, and sing to them. Most of the caregivers at the nursery have children of their own and love their orangutan babies almost as much as their own babies.

Right now, Uttuh would rather play on the ground than in the forest canopy as she is completely fascinated with dirt! She digs, picks up handfuls, puts it on her face and even in her mouth. Trial and error is a great way of learning what is good to eat! However, if you give her leafy branches, she will spend the whole day attempting to build a nest. She sits in the middle of the pile and bends the long ends in towards the center, patting them down as she goes. Her instincts are strong but she still has yet to learn where these branches actually come from. There is no rush to hone this skill as she has many more years before she will have to do it on her own. She also likes to cover her head with branches; a behavior expressed when orangutans are caught in the rain. Why sit miserably in the rain when you can make your own umbrella? Uttuh is not a picky eater and likes the fruit of all seasons here in Borneo. Her favourite treat are the berries found in the forest near the OCCQ. But she is very polite and waits for the berries to be picked by her caregiver before tasting.

Uttuh has a bulbous, rather full-looking, belly. This is a great indication of her health. Uttuh’s big belly means that she is getting enough fruit to eat but more importantly, enough milk to drink. I love tickling Uttuh’s belly; it brings a huge smile to my face. Uttuh returns my smile with an open mouth showing her small teeth and dark gums. Her eyes squint or even close when I tickle her. She enjoys this as much as I do! This interaction never last very long. However, Uttuh is always on the go – never sitting still. She is like a busy little bee! She is much too busy to sit still for even a moment to capture a photo of her beautiful eyes.

Uttuh will be in the care of OFI for many years until she is old enough for release. OFI is dedicated to ensuring that Uttuh grows up to become strong, smart, and self-sufficient. But Uttuh is not the only one. There are currently fifty-two orangutans in OFI’s nursery. Fifty-two infants without mothers. Fifty-two lives turned upside down by the destructive actions of humans. Fifty-two chances to make a difference and re-build lives. Without OFI, Uttuh and her nursery-mates would likely not have survived. If they had, they would become pets crammed into small cages; used to entice customers into restaurants, shops, etc. or far worse. At the OCCQ, Uttuh can focus her attention on playing, eating, and all the other wonderful things that orangutan infants do.

Orangutan of the Month for Nov, 2017: Andrena