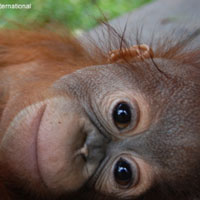 Selecting just one orangutan for orangutan of the month has proven to be a much more difficult task than I had originally anticipated. There are over 330 orangutans at the Orangutan Care Center and Quarantine (OCCQ) and each one has unique traits, quirks and stories. Steppenwolf was one of the first infant orangutans I met when I arrived at OCCQ in early-January 2012, and I was instantly drawn to him.

It is easy to see how Steppenwolf could capture a person’s heart. With his tufts of glossy hair and expressive face, Steppenwolf is a very cute infant orangutan. However, what really stood out were his eyes. Orangutans have expressive and thoughtful eyes, but when I first looked into Steppenwolf’s eyes, I felt like an old soul was staring back at me.

Steppenwolf is approximately two-years old. There is no doubt that he has seen a lot in that short period of time. Steppenwolf is one of the newer arrivals to the Care Center. Little is known about his life before he came into OFI’s care; however, we do know that he was brought to us as a result of palm oil. He came from a palm oil plantation close to one of OFI’s orangutan release sites. When Steppenwolf arrived at the OCCQ, he was very skinny, weighing only 3.5kg (8lbs), and had burns on his hands and feet. No information was given on how he had received these burns or where his mother was. Infant orangutans spend the first several years of their lives entirely dependent on their mother, so the chance that Steppenwolf was voluntarily separated from his mother is unlikely. Although we can only speculate, it is most likely that his mother was killed.

In his short time at the OCCQ, Steppenwolf has been healing and growing rapidly. His burn marks are no longer visible and it seems that his emotional scars are also diminishing. Thanks to Steppenwolf’s love of milk and rambutans – a red tropical fruit with soft red spines – he now weighs 5kg (11lbs). Steppenwolf spends most of his time with Miss Tika, his surrogate mother. Like an orangutan mother, she carries, cuddles, and feeds Steppenwolf. Young orangutans learn the forestry skills needed for survival from their mothers. This includes where to find food, what food to eat, how to eat it, and how to build a nest. Miss Tika will spend the next few years caring for Steppenwolf and helping him develop these skills.

When Steppenwolf first arrived, he seemed nervous interacting with other orangutans his age. However, recently Steppenwolf’s timidness has faded and he has become an inquisitive and social little boy. He still relies heavily on Miss Tika, but he has also started to form friendships with the other infant orangutans. Turner, Charlie, Melly, and Steppenwolf have become constant playmates. One of my favourite things to do is sit and watch the four friends chase each other across the forest floor, rolling and somersaulting before landing in a giant heap on the ground.

Steppenwolf is a bit hesitant to leave the ground. His friend Melly is an avid climber and Steppenwolf will carefully mirror her movements as he follows her up a small tree. Once in the tree, the two will forage for leaves and fruits to eat. When Steppenwolf is back on the ground, he loves to play in the dirt. He loves to roll in it, eat it, and throw it on himself as if he’s having a dirt shower! Steppenwolf’s aim still needs some improvement, so the orangutans or caregivers sitting nearby often end up having a dirt shower as well.

When Steppenwolf has exhausted himself playing, he will go and find Miss Tika for a cuddle. While he is unwinding, Steppenwolf will lay on his back staring up into the trees. He seems to be soothed by the sounds of the rustling trees and humming insects. When I watch Steppenwolf, I feel like I am watching him regain some of the childhood innocence that he lost when he was separated from his mother. OFI has given Steppenwolf a second chance at life in the wild. The OCCQ will provide him with the safe haven and love that he needs to learn the forest skills that will one day make him an excellent wild orangutan.

Orangutan of the Month for August 2019: Mumui,
Explorer in the Making