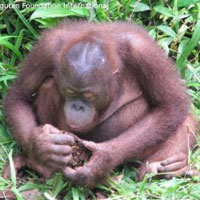 This is my last Orangutan of the Month article and the choice was clear: Eric. Eric first caught my eye when he was introduced to me by a fellow volunteer. She told me there was something different about him. My interest was piqued and I began to spend time with him. Eric quickly became a favorite of mine. Although there are many orangutans in OFI’s care at the Orangutan Care Center and Quarantine (OCCQ), it’s impossible to not have special connections with a select few. People have personalities and so do orangutans; it’s only natural for some to clash and some to meld. Not only is Eric a special friend of mine, he is also the first orangutan that I was able to recognize without being told who he was. A major milestone in my time in Borneo.

Eric squeaks whenever I visit him. As I approach, I call his name. I like to think that he is calling my name too. When we meet face-to-face, the first thing that Eric does is take both of my hands in his. Although his is still young, his hands are very large; much like a puppy who hasn’t yet grown into his paws. He never pulls or squeezes, just holds gently. Although one should never look an orangutan directly in the eyes, Eric craves this intimate contact and is the first to lock gazes. Eric and I have spent hours in these silent conversations, holding hands and attempting to read one another’s thoughts. One of my most memorable moments with Eric is when he brought me close so our noses were almost touching. He placed a gentle hand around the back of my head and looked at me as if he had a secret to tell me. If I am having a hard day, I tell Eric about it. He may not understand my words but I believe that he understands my feelings. He always knows just what say to make me feel better even if his words are unspoken.

Another trait that makes Eric stand out is that he does interesting things with his food. Most orangutans, especially males, will eat as much and as fast as they can. Many will even try to take food from others. This behavior is observed in most animals and is a survival tactic. When I visit with Eric, he is always trying to feed me! If I am lucky, he will carefully peel a banana and attempt to push it into my mouth. If I’m not lucky, I get rambutan husks, leaves and even sticks. On more than one occasion I have chewed his offerings only to spit them out when he isn’t looking. If he catches me declining his offering, he looks confused for a moment and comes back with something else to feed me. On another occasion, instead of feeding me his peeled banana, he drew all over my t-shirt with it! One of OFI’s enrichment volunteers is convinced that Eric’s favourite colour is yellow. She was wearing a yellow t-shirt when he pointed to it and then to a banana. He did this repeatedly! Perhaps Eric is the next Picasso? Perhaps he wanted more bananas.

The sensitive, intuitive Eric disappears in the forest; both figuratively and literally! Eric does not think twice about his human friends in the forest, he is only interested in climbing trees. And what a tree climber he is! Eric is always the last orangutan to be collected at the end of the day. Sometimes even hours after his friends have settled in for the night. He is not only comfortable in the forest, he can perform magic tricks. One minute his is beside you, and the next he is gone. If he does emerge, he is always on the other side of the path or boardwalk. How does he do that? Other orangutans break branches or rustle leaves as they move in the forest. Eric moves silently without causing any disturbances. It’s these disappearing acts that make him so hard to find at the end of the day!

The word orangutan comes from the Indonesian language; orang meaning person and hutan meaning forest. I cannot think of a more literal representation of “person of the forest” than Eric. Orangutans are led by instinct, experience, and their mother’s teachings. However, there are moments of emotion and understanding where the line between animal and human becomes blurred. Eric is smart, funny, and caring. He is also a fierce, strong, and independent. He enjoys holding hands and sharing a meal. He also enjoys sleeping in trees and eating termites. Some may only see Eric as an animal while others consider him a person. I just call him friend.

Orangutan of the Month: Tutut