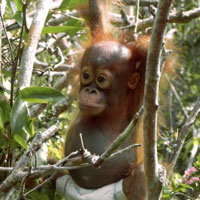 The name “Mister Bernie” fits this tiny orangutan perfectly. He is an old soul with a thoughtful gaze and a soft way about him . When out in the jungle learning forest skills, “Mr Bernie” plays and climbs and has a great time. He is strong enough to climb trees, unlike some of his nursery roommates, and relishes just hanging from a branch. However, after an hour or so, “Mr Bernie” becomes tired, whereas all the other infants are still playing energetically. At this point, all that “Mr Bernie” wants is to get back to his favorite caregiver and nap in her arms. But jungle school is a time to play and gain strength and so the infants are encouraged to play independently of their caregivers and not to cling and cuddle. Mr Bernie must therefore be sneaky. At first, he is 20 feet away from the caregivers in a tree, but then he sneaks out of sight. Mr Bernie then appears closer to the caregivers, but is seemingly uninterested in them, playing in a tree. He disappears from sight again, then reappears right on his favorite caregiver, clinging with an iron grip. Mr Bernie then promptly falls asleep. Sometimes he is not stealthy enough and is caught trying to slowly approach his caregiver. In this case, he is gently turned away to go play some more. Sometimes he does, in fact, go off and continue to play, but other times he just falls asleep on the jungle floor. He is not sick but simply tired.

Many of the other orangutan infants who share the nursery with “Mr Bernie” are very shaky in their movements, but they are quick. They move unsteadily at what seems like warp-speed, and then fling themselves at their target. This is not how “Mr Bernie” moves. He moves slowly and methodically. In his case, slow and steady wins the race.

“Mr Bernie” has a mouthful of teeth that seem too big for him, but they, no doubt, help him consume copious amounts of food. “Mr Bernie” has an insatiable appetite. This has enabled him to grow big and strong, a big improvement from the skinny little orangutan who first entered the nursery. His favorite fruit is bananas, just like “George Baru”, and together they eat bananas until there possibly could not be any more bananas in the world. Once both “Mr Bernie” and “George Baru” got their hands on a bunch of bananas. Neither of them yet knew how to peel a banana so they simply bit through the skin and squished out the fruit. They were discovered by a caregiver, surrounded by many half eaten bananas and much banana goo, lying on their backs with their little bellies protruding to the point where it was seemingly possible that they would burst. They had simply eaten too many bananas. “Mr Bernie” still loves bananas and will sometimes try and steal them from infants near him.

Since “Mr Bernie” steals baby bottles full of milk from other orangutans, he must be watched carefully. He will even drink milk cold, although it is definitely not his favorite. He has been discovered in the nursery, attempting to break into the milk making station. Another time he snuck up on top of the sleeping enclosures in the nursery to where all the milk bottles had been placed momentarily before infant feeding. He managed to steal one bottle, but at least it was his own.

When “Mr Bernie” first arrived at the care center in July 2010, he was a scrawny, scared little thing with hair matted from sticky sap. After a long bath, some motherly attention, and countless bananas, “Mr Bernie” started thriving in his new home. He is strong, healthy and handsome. “Mr Bernie’s” favorite activity is to drink warm milk in the arms of a caregiver. There, he feels safe, nurtured, and cared for, and there is no other place that “Mr Bernie” would rather be. As “Mr Bernie” grows up, he will cling less and less. He will be able to stay awake for all of jungle school. And one day he will become an independent adolescent male, ready to go back to the rain forest that was once his home and flourish there with all the skills that he will have acquired during the process of rehabilitation. But this is all years away, and right now “Mr Bernie” is most likely plotting his next food theft.