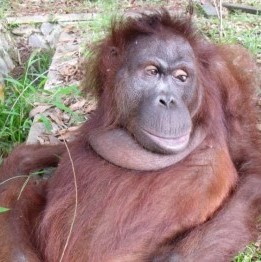 Hangki was a beautiful and extraordinary orangutan. Her calm and gentle demeanor and her soft voice captured the hearts and minds of many people and made her much loved among the OCCQ staff and volunteers. Hangki was paralyzed from the waist down. Despite her severe disability, this big but sweet adult female orangutan showed a very strong will for survival. This was most obvious at mealtime. Whenever Hangki laid her eyes on some delicious snacks (her favorite being peanuts) she seemed to forget her paralysis and would roll head over heels towards the awaiting treats.

Hangki enjoyed her regular forest outings immensely and took her time to forage for young leaves, ants, and banana leaves, etc. or to just relax, sit, or look around. Frequently, people who were passing by would stop and watch Hangki in her natural surroundings. Often they would say that she seemed to be enjoying herself and looked genuinely “happy”.

Perhaps foraging in the forest behind the OCCQ reminded Hangki of the days when she lived as a free-ranging, wild born ex-captive orangutan in the Lamandau Wildlife Reserve. After OFI released Hangki back to the wild in Lamandau, we thought that she would spend the rest of her days in the forest of this protected reserve. Unfortunately, a viral infection brought her back to our Care Center in 2004. We thought Hangki would die despite the intensive care she received. However, even after going into a coma, Hangki survived but was paralyzed from the waist down. Over the years her paralysis improved but only by a little bit. She remained highly disabled. In North America had she been a human, she would have been given a wheelchair and a lift to get her in and out.

In her six years as a disabled orangutan at the Care Center, Hangki received much love, care, and affection from many staff members and volunteers. In the past year one of the volunteers, armed with an in-depth knowledge of Bowen Therapy, began a small physical therapy program for Hangki which was continued by other volunteers. This program included forest outings where Hangki would do exercises in return for small edible treats. The combination of physical exercise and enjoyment of treats afterwards made Hangki squeak softly in anticipation each time she was taken out from her sleeping cage.

In addition, Hangki received special attention from our enrichment co-coordinator Ibu Maryanti. She discovered that Hangki would do anything for a rotan ball filled to the brink with treats such as peanuts. Ibu Maryanti would often make such balls specifically for Hangki. Recently, the combined efforts of staff and volunteers to increase the quality of life for Hangki paid off unexpectedly when she gathered all her strength to climb a small tree. Subsequently, she made the effort a few more times to climb small trees for treats. It seemed to satisfy her that she was able to do so.

Although it is hard to predict the life expectancy of an orangutan with such a severe disability, it came as a shock to everyone when Hangki unexpectedly and silently passed away before dawn in the early morning of the 11th of January 2011 at the approximate age of 18. Since we do not know her exact birthdate, her exact age will never be known. But she seemed to be a young adult female. As there were no signs of illness, we hope that she went peacefully and did not suffer. She seemed to have died in her sleep. Perhaps her heart just gave out. Hopefully, a planned autopsy will give us more answers.

During her years at the OCCQ Hangki brought joy and laughter to our staff, and enriched the lives of those who worked with her and knew her. We are sad to say goodbye, but are happy to have known her. She was a wonderful orangutan and will be remembered. She embodied the gentle and innocent spirit of all orangutans.