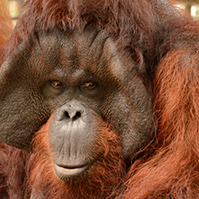 The release of an orangutan back to the wild is a culmination of many years of hard and dedicated work. It is a profound moment when wild born ex-captive orangutans are finally released and free to live as they choose in the forest. It is not a straight and narrow path and, very, very occasionally, an orangutan chooses not to go. This was certainly not the case with Boncel.

We will let OFI President Dr. Biruté Mary Galdikas tell the tale of Boncel’s early days because she was the one who brought him to the Care Center many years ago. She persuaded his owner that Boncel would be happier with his own kind rather than as the caged pet of a human.

It took Boncel a bit of time to settle into OFI’s Orangutan Care Center and Quarantine (OCCQ) in Central Borneo. Once he settled into life at the Center, Boncel grew quickly. He was a boisterous orangutan roaming far and wide. On his daily releases to the Nursery Forest he interacted well with his playmates, especially with his friend Joesmik, and ran rings around his caregivers. Showing excellent climbing skills and a curiosity that knew no bounds, he would venture to the edge of the forest. This would sometimes lead him near people’s homes in the surrounding area. It seemed as if there was nothing that could contain this curious but gentle orangutan.

Over the years as Boncel grew bigger, he became too large for his caregivers to handle. An orangutan male is said to be seven to eight times stronger than a human. Orangutan males become much less tolerant towards males, both orangutan and human, and normally are after a certain something when it comes to females.  So Boncel’s trips to the Center forest grew less frequent.

At least he had his best friend Joesmik to keep him company. The pair shared their sleeping enclosure for many years. They were constant companions; they always played, wrestled together, and looked out for one another. Overtime Boncel quickly outsized Joesmik and began to develop the adult male orangutan’s signature cheekpads.  When Joesmik developed cheekpads he became stressed even though the flanged Boncel never bothered him or acted aggressive. It was a very unusual situation for two flanged adult males to share an enclosure together but no aggression ever occurred. Nonetheless, we built a separate enclosure for Joesmik and he liked it fine. Joesmik was released into the wild several years ago.

The adult Boncel kept himself busy. His mind seemed to be always working even when he was sedentary. One pastime he enjoyed was trading with any passersby. Boncel would clap his hands for attention. Once he had it, Boncel would gather anything he could lay his hands on in his enclosure and try to swap it for whatever the passerby had. Boncel will trade your ice treat for two leaves, final offer.

Boncel was also an observer. He would watch intently whenever any activity was being carried on at the Care Center.  Dr. Galdikas remembers when she was being interviewed by a German colleague, someone Boncel knew and liked. As the two women pulled chairs next to Boncel’s cage, he put down food he was eating and watched seemingly mesmerized as the interviewer moved her smart phone in the air recording the interview. He could not have been more fascinated and seemed to be trying to understand the nature of the interaction.

Not wanting to keep Boncel cut off from the forest, OFI released Boncel in a “semi-hard release” into an artificial forest island called a “Haha.” This structure was so named after a common feature of English estates in the 18th century. A trench was dug around an area of land or a manor house and then walled off with the fence going below into the ground. It helped provide an unbroken view of the landscape but prevented grazing animals from reaching the manor house.

An artificial island of natural forest in the form of a Haha was developed for oangutans where they could be released to explore and be monitored by staff to determine the individual orangutan’s readiness for release into the wild. Maybe the phrase “Haha” is apt as Boncel had the last laugh with this one. Boncel was released into a one hectare (2.5 acres) forest island. He took to the forest eagerly.  Not taking long to hunt high and low for avenues out, Boncel once again demonstrated his perspicacity by promptly escaping within a day. Using a wooden log that he leaned against the side of the trench wall he scrambled up and was out. He did it once “in private” with only caretakers in attendance. He was promptly tranquillized, caught, and returned to the island. He waited until he had a large enough audience to impress before his second attempt at the great escape a few days later. Dr. Galdikas reports that he locked eyes with her as if telling her he was going to do it. The large long stick he was holding in his hand, like a pole-vaulter about to spring, was clue enough. It was not quite a laugh for the onlookers who had to run out of Boncel’s way as he charged,  intent to them unknown, towards them. After he pulled a torch out of a caregiver’s hand but without harming him, Boncel ended up in the trees above the caretakers’ house. This time he did not go in and sample the caretakers’ left over breakfast coffee from their mugs or picturesquely (inadvertently) smash their cell phones when he pulled the tablecloth off the table where the phones were sitting charging.  But it was important to get Boncel back into the Haha safely as there were nearby settlements where he could be in danger.

Where there’s a wil, there’s a way. Like a WWII POW intent on making life difficult for his captors Boncel had escaped twice. Once again, he was running rings around his caregivers. To paraphrase Oscar Wilde, to let an orangutan escape once may seem like a misfortune (for humans) but when he escapes twice, he is trying to tell you something. Clearly one hectare of forest wasn’t enough. Boncel once again demonstrated that practically nothing could contain him. So Boncel was brought back to the OCCQ where it was unanimously agreed that he was definitely ready to be released to the wild.

Boncel has seen many people and orangutans come and go in his time, and finally it was his turn. It was time for Boncel and the OCCQ to part ways. It was a sweet sorrow as Boncel embarked on a new chapter of his life.  Almost 20 years after his arrival at the OCCQ, the day came in late 2018 when Boncel was taken in a transport cage to a camp deep in the forest of Tanjung Puting National Park. (Park officials observed the release and signed the permission papers.) The transport cage door was opened and Boncel wasted little time in coming out. He didn’t need any tools or means of escape here. He was finally back where he belonged. The OFI still stands guard and monitors but the forest is his now. Time has come for Boncel to move on but he remains forever in the hearts and minds of those who know him and who say thank you for the memories.  As of September 2019 Boncel occasionally returns to the feeding platform at the site where he was released but he doesn’t stay very long. The great forest agrees with him.

Why did it take so long for Boncel to return to the wild? The answer lies in the fact that, as massive deforestation occurs in Borneo, it is extremely difficult to find protected primary forests where ex-captive wild born orangutans can be safely released to life in the wild. Boncel was lucky as the Indonesian government some years ago decided orangutans could be returned to National Parks and other nationally protected areas. As one Forestry official remarked to Dr. Galdikas, “Where else?” A good question. Today, right this minute, forests all over Borneo are burning.

Tags: Orangutan, Orangutan of the Month