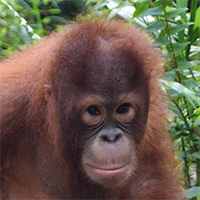 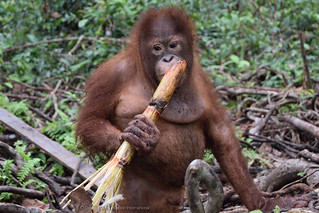 Christmas time is the most wonderful time of the year, or so the song goes. This time of traditions, gift giving, and cheer is also the time we get to spend with family and loved ones. It was during this time a few years ago that a tiny young orangutan orphan arrived to the Orangutan Care Centre and Quarantine in the province of Kalimantan Tengah, in Central Indonesian Borneo. Taken in just the day after Christmas, he was appropriately named “Santa Claus.”

A couple years old, he arrived much too skinny for his age, and very scared. No staff could approach him without a defensive nip. The OFI team had their work cut out for them. He eventually settled in, accepting help from caregivers as well as the company of orangutan peers. He wasted no time eating everything he could get his hands on, eagerly guzzling milk and snacking on fruits like rambutans, bananas and mangos. Before long, he started to put on a healthy weight and take more after his namesake! The belly he is busy cultivating is a testament to this. Soon he began to show a resemblance to the “real” Santa Claus!

Santa Claus is a gentle and compassionate orangutan. While he prefers to explore the forest independently, he graciously makes time to socialize. In the midst of his peers playing, he takes the time to sit and look around, nodding with approval at the sight of his friends enjoying themselves. He graduated quickly from Camp Danielle, the “nursey” at the OFI Care Center. He now resides at Pondok Dua, the juvenile camp, where his personality continues to flourish. A natural born leader, Santa Claus knows precisely what he wants to do and follows through. He is already developing and utilising an impressive throat sac. He can sometimes be heard vocalizing at the top of the trees, the grumbling resonating through the forest. His developing throat sac will intensify these sounds in time. When he reaches full maturity, it will help him in communicating with other orangutans.

Santa Claus is always eager to learn and attend forest school. When he spots his caregivers preparing for a daily excursion, he starts shaking the door of his enclosure, full of excitement. In the Learning Forest, Santa Claus loves to wrestle with his peers, tussling and rolling around. If his peers think of disengaging, he reaches out and grabs a hold of them, pulling them back for another round. When he has had enough of this game, he enjoys exploring the forest on his own. Quick as a flash, he disappears into the undergrowth as he heads toward the big trees. Pirouetting from branch to branch, he tests the limits of the shrubbery around him. Spotting trees that have already been blown over by the wind, he bounces up and down on them before climbing right out to the end to sway back and forth.

Santa Claus also likes to fit in some time to get muddy! He splashes around in the pools of rain water, drenching his face and slurping up mouthfuls of water before spitting most of it back out. He pulls in any orangutan nearby to join in on the fun. He, Tommy and Kobe will cover their faces in mud and merriment. When he needs a rest, Santa Claus likes to check in with his caregivers. He walks over and plonks himself down on the nearest person’s lap. Playfully licking and planting kisses on their faces, he is sometimes lucky enough to be offered a tasty treat like a piece of sugarcane or durian. While enjoying such a snack, he receives spa-like treatment as his caregivers begin to clean his thick hair. This is to no avail as he will promptly retreat to splashing around in the swampy water! Back in the muddy pools, he picks up large old branches and takes big bites out of them, enjoying the crunchy noise they make. 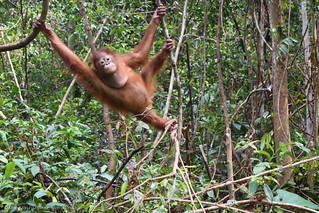 Finally, it is time to climb as high as possible to have a rest in the canopy. After a period of relaxation, he scales down the sides of the trees. About six feet from the ground, he drops down, crashing to the forest floor like a lead balloon. He clearly enjoys this jolt of activity, as he sometimes repeats this process several times during the day! Inevitably, the day of forest school must come to an end. Santa Claus offers little resistance, satisfied with a full day in the forest and knowing that he will back out in the forest tomorrow.

Santa Claus still has some years of rehabilitation and learning at the Care Center, but every day that this young orangutan enjoys is a gift. While his name brings to mind the Yuletide, this orangutan’s journey of joy and discovery will continue all year long. This unexpected Christmas delivery has turned out to be a gift for all.

Orangutan of the Month: Mighty Montana