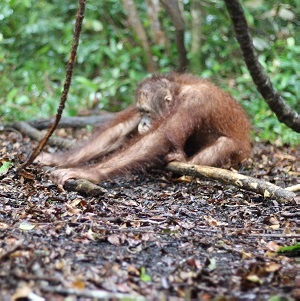 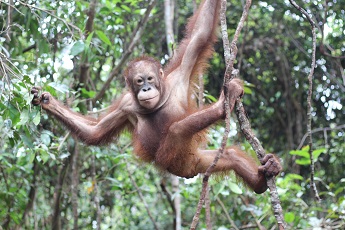 Hermits, it seems, have gone out of vogue. These days socializing is what people are talking about. “It’s good for the brain” they say, “good for the heart.” Similarly to cloistered monks, Kalimantan’s orangutan males remain staunchly solitary. Time has been the best teacher. After thousands of years of practice, these sentinels of the forest thrive on their solo journeys.

Take Orangutan Foundation International’s (OFI) Chewey for example. This bright spark is a juvenile, and he tears through the forest alone each day, content with letting his friends knock heads a mere five feet away. Chewey’s lack of company does not mean that he doesn’t have social graces. The young orangutan has proven himself time and time again to be curious about other orangutans.

Chewey has what writers of yesteryear would call “an honest face.” His long face, framed by neat gingery hair, always has a pleasant expression. His lurching walk recalls an innocent soul embroiled in intrigue, blameless but enjoying the ride. It is this likeability that draws one to him. Each newcomer, change in weather, and every undiscovered branch or vine is an invitation to play. Merrymaking is serious business to Chewey, his cohorts and whomever might be drawn into his circle that day. Instead of using the familiar knuckled walk of orangutans, Chewey somersaults to his destination. He tackles vine and tree branches in the forest with vigor, climbing intently, and then dropping to the forest floor without warning. He radiates enthusiasm during play.

Ease with all species contributes to making Chewey such an open book. He was brought to OFI’s Care Center and Quarantine at roughly two and a half years of age. He had all the tell-tale signs of being held as a pet in a private home. He arrived dressed in children’s clothes. His diet has consisted, till then, of rice, porridge, milk and bananas. Even then, the young orangutan’s big personality did not fit the diminutive name his captors had given him: Mickey. At OFI, he was christened with the interstellar moniker that we now know him by. Chewey is currently the ideal weight for his age and has been blessed with vigor since his arrival at the Care Center. He graduated easily from the infant nursery into the juvenile residence. His caregivers note how often he seems to be in his own world. Nevertheless, he is courteous to those who approach him, especially if those individuals happen to be female. Yes, Chewey is a ladies’ man. He is direct in his expressions of affection and exudes good times. While men hold little interest for Chewey, he amiably engages with females. 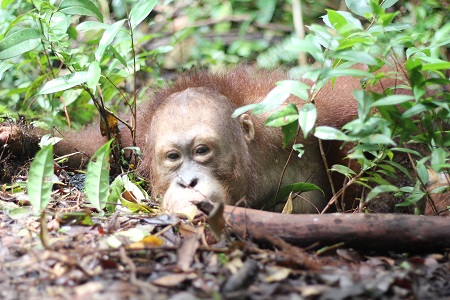 Orangutans, like humans, have wonderfully complex personalities. It shouldn’t surprise observers that this tour de force of an orangutan is also a planner. Before Chewey flings his strong, young body into overhead branches, there is always a pause. He approaches a clearing and silently looks up at trees, mentally tracing a path through them. Whatever Chewey does is with purpose.

On one warm, wet March day, Chewy had a big banana leaf in one hand, and a vine in other. Perhaps he meant to use the foliage for shelter from the rain, but he was having too much fun smacking it against a tree. With thunder searing the purple sky above, Chewey took a seat and unfolded the leaf on the forest floor with the concentration of a seasoned dressmaker. The young orangutan folded the frond, chomping a twig between his teeth. He then liberated the twig and scratched it on the leaf, marking it with concentration the way that a designer would mark fabric.

It was only a matter of time that clever Chewey grew emboldened as his size increased. Now he is often seen tussling in jest with his caregiver, Pak Heppy. If he is foiled from approaching females, Chewey will make his annoyance apparent. His friends, one of whom is Steppenwolf, band together at playtime, forming a trio of which Chewey is the clear leader. The other two, with strong personalities of their own, defer to Chewey because of their obvious affection for him. Their trust is not misplaced. Pak Heppy notes that Chewey is starting to approach others of late, initiating play and following his curiosity. As Chewey finds his place in the world, these developments are not just a gift for him, but for us too.

Orangutan of the Month: Maxine