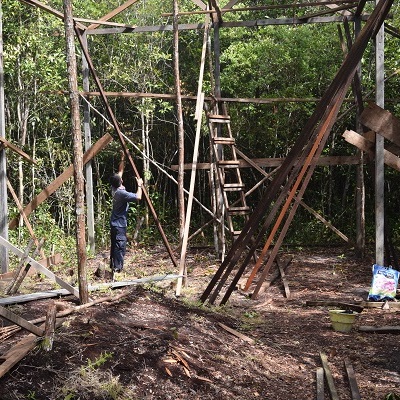 The Orangutan Care Center and Quarantine (OCCQ) in Central Indonesian Borneo is constantly evolving to best serve the needs of orangutans and other wildlife under the care of Orangutan Foundation International (OFI). Sometimes, it is necessary to build entirely new structures to replace worn-out facilities or those that are no longer suitable for the growing orangutans in one way or another.

One such example is Pondok Cempadak, an orangutan rehabilitation facility that used to be located across the road from the OCCQ in Pasir Panjang, Central Indonesian Borneo. The facility initially started out as a nursery for wild born ex-captive orangutan infants, but as they grew older, it became clear that the small trees in the vicinity were not sufficient to provide the increasingly larger orangutans with adequate exercise and forest-experience training, which are crucial components of the rehabilitation process. As a result, OFI built two new playgrounds behind the facility where the juvenile orangutans could play, swing, brachiate, and otherwise enjoy themselves.

But this wasn’t enough. As much as the orangutans enjoyed their new playgrounds, the sight of a primary tropical peat swamp forest in the distance provided a constant lure. Consequently, the orangutans were perpetually escaping into the deep swamp forest beyond, forcing Pondok Cempadak staff to go around on their motorcycles in order to find and bring back the escapee orangutans. OFI staff came to the conclusion that Pondok Cempadak orangutans liked motorcycle rides.

Clearly, it was time to build a new camp for these orangutans, one that was located and surrounded by the forest where they would not have to escape their facility to be able to access the forest, only to be brought back by staff on their motorbikes. 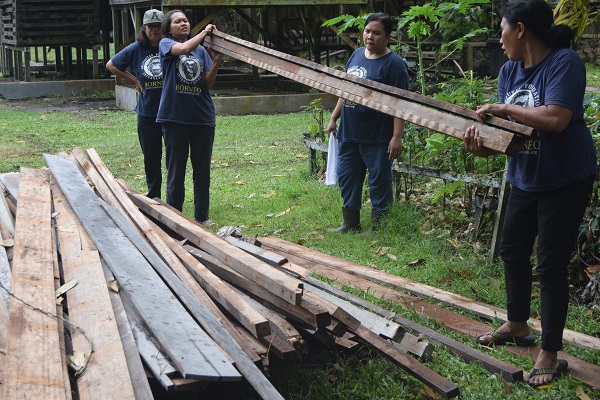 This is when OFI’s sister organization, OFI Canada, stepped in to help, donating funds specifically toward the construction of a new pondok and playground facility through the generosity of the Youssef-Warren Foundation.

While the Indonesian word “pondok” translates to “hut”, pondoks are much more than that at the OCCQ. Here, they are fully equipped facilities with kitchens, staff sleeping quarters, sleeping enclosures for the orangutans, and often more. Most pondoks even have at least one cat “on staff’ patrolling the area for rats which, in turn, helps to keep snakes away. This is Borneo, after all.

Each pondok facility comprises several enclosures for orangutans of varying ages. For example, Pondok Dua cares for young juveniles and Pondok Danielle currently houses the infants. The new facility, Pondok Youssef-Warren Cempedak Two, is being built to house the older juvenile and younger adolescent orangutans who started out as infants in the old Pondok Cempadak facility.

The first step in building a new pondok is to acquire raw materials, such as ironwood, valued in Indonesia for its strength and durability as well as for its cultural importance. Some Dayak people believe that ironwood protects them from dangerous animals, and accounts for the lack of tigers and elephants in Borneo. In many villages, laws exist to limit the exploitation of this vulnerable and valuable timber species. The price of ironwood has been going up as it is now mainly brought in from the mountains.

After building the main building of the pondok facility done primarily by professional carpenters helped by OFI staff, the construction of the playground began. This was an OCCQ team effort involving many staff members from the Care Center. Following the delivery of raw materials from Pangkalan Bun, staff carried the wood, winding down a narrow pathway, to the site of the new pondok facility nestled within the forest of the Care Center. This journey gave some staff the opportunity to show off how strong they were and how much wood they could carry at once! 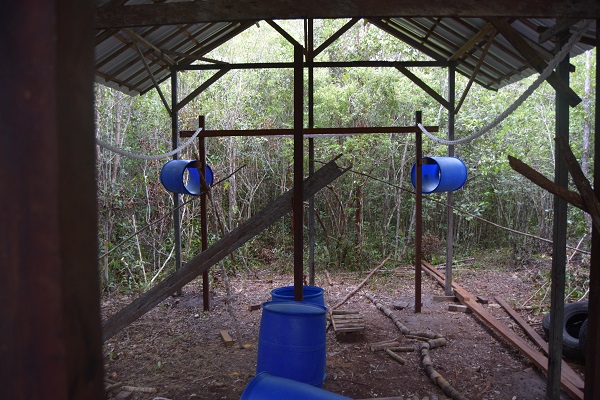 Next, some experienced hands stepped in to initiate construction, led by resident OCCQ carpenters Pak Masri and Pak Sehat.  A roof and many posts made up the structural shell of the playground…machetes at the ready!   Whatever the task at the Care Center, about five people seemed to appear out of thin air ready to help and offer their “two cents.”  Many discussions were had about where the posts should be placed.  In the meantime, wood was beginning to run out. Placing another order of ironwood from Pangkalan Bun could take weeks.

Days were long and hot, but spirits were high, helped by jokes and iced tea. Sawing the wood and hammering the pieces together on the ground, the roof was partially constructed and then carried into position by Pak Tumin and others.  Just like their orangutan charges, many OFI staff members who grew up around Pasir Panjang are no strangers to the forest.  They display impressive climbing skills where others would struggle. All Pak Ateng needed was two beams of wood, and he could scramble up to the top to help lift the roof in place!

With the shell in place, the Enrichment Team stepped in to fill in the details. With their combined experience building other playgrounds over the years, this playground was sure to have the latest enrichment features. Rope ladders were made from scratch with wood and rope, drilled to spec, and hung from various spots. Blue barrels were installed for the orangutans to use for playing, hiding, and building nests within. Tires were suspended from the ceiling. Constructing and installing all the pieces was time-consuming, detailed work, but many hands made for light work, and the effort paid off once the orangutans tested out the facilities!

When the orangutans finally came in, they seemed to enjoy their new playground with great gusto! Orangutan Hayes liked it so much that he decided to split his time between the Learning Forest and the playground, but not without bringing some of the forest back with him into the playground, yanking branches from adjacent trees. With eight blue barrels to choose from, Orangutan Jangkis gravitated toward those that were centrally located. Orangutan Ponti enjoyed hanging from the roof, probably relishing the comforting safety of being high up in the rafters.  As they continue to hone their forest skills, the orangutans utilize the playground when and how they want, but there are always some who bypass the playground entirely to head straight out for the Learning Forest. 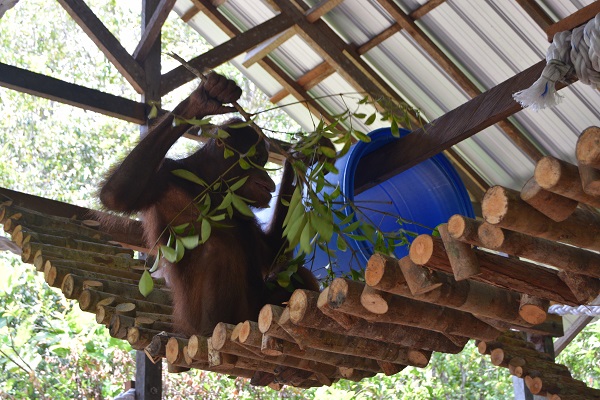 Once a mass of wood and nails, the playground took just over a month to complete, thanks to the hard work and dedication of staff from all corners of the Care Center.  It stands ready for the orangutans to use as they continue on their path to freedom in the wild. Special thanks are owed to OFI Canada and Youssef-Warren Foundation who made the construction of this new pondok and playground possible as well as other donors who continue to support the ongoing process of rehabilitating these growing great apes!

News from the Field: Bringing the Forest Back