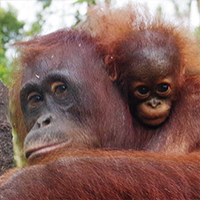 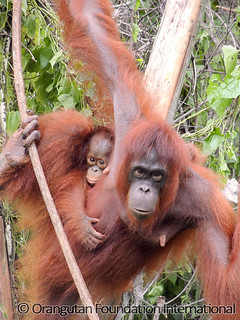 Orangutan Foundation International (OFI) works tirelessly to rehabilitate and release wild born ex-captive orangutans back into the wild. This process is a long one as orangutan infants in the wild will stay with their mothers for at least the first eight years of their lives. During the rehabilitation process the orangutan orphans who call the Orangutan Care Centre and Quarantine (OCCQ) home have to learn all of the forest skills they will need for a life back in the wild. OFI caregivers work hard to prepare orphaned, injured, and displaced orangutans for life back in the forest.

When the day arrives that an orangutan is ready to be released back into the wild, it is always a joyous occasion for OFI staff and caregivers. The release represents the culmination of years of strenuous work preparing the orangutans for life in the forest. For the orangutans, it means that they will now get their second chance to live in the wild as they were born to do. Once orangutans are released, OFI field staff based at the release site monitor the orangutans and send back news to the OCCQ about how the newly released orangutans are doing. OCCQ caregivers are always delighted to learn that a released male has grown cheek pads. They are particularly pleased to hear that one of the released ex-captive female orangutans has become a mother. 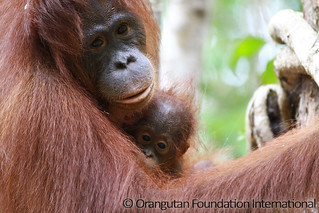 Happily, there has been a bit of a baby boom recently at one of OFI’s forest release sites which sits on the edge of Tanjung Puting National Park with untouched rainforest – much of it peat swamp – spreading out behind. Female orangutans Claire, Lidya, Jade, Nanda, Noni, Ruby, and Septi, all of whom were rehabilitated at the OCCQ and released in 2013, have matured into adulthood and now have offspring of their own! Most of the newborns are males. They cling on tight as their mothers climb through the forest. OFI field staff love watching the mothers with their babies. 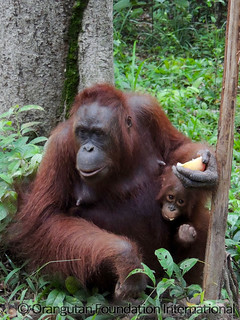 The long-term staff members who have been with OFI for decades fondly remember the new mothers as infant orangutans living at the OCCQ. OFI’s Deputy Manager, Ibu Sumi, worked for OFI as a teenager while in high school. She remembers when Noni arrived as a tiny infant, orphaned, listless, and sick. Ibu Sumi slept with Noni every night and after dedicated attention and care, Noni soon began to thrive. Ibu Sumi is very proud that Noni is now back in the wild with an infant of her own. Other staff recall Lidya as a very quiet infant and Jade as wild and un-trusting of humans when she first arrived at the OCCQ. Any staff member who has been with OFI for a decade or more remembers the released females and all say they celebrated on the day when each orangutan was released back into the wild, and then again with the news that these orangutans had successfully birthed their own infants. 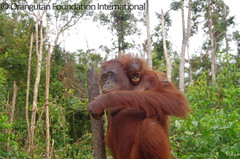 Having grown up together at the OCCQ and reuniting in the forest as free-ranging orangutans, these females have formed a strong bond. So close is the friendship between Nanda and Lydia that whenever the staff spots one of them, the other is never far behind. They both have sons around the same age, and Nanda even trusts Lydia enough to leave her son in Lydia’s care while she forages for leaves and plays with adolescent orangutan Sandra in nearby trees. Lydia and Nanda’s sons play together contently until Nanda decides to return to her son and move on with him clinging onto her side. 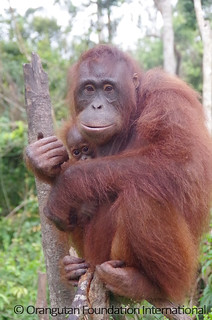 Not all of the orangutan females had their offspring at the same time; the oldest infants are now around two years of age. The newest infant addition to the group was only born late in 2015. Some of the mothers hang around close while others travel much further afield. When one of the far-ranging mothers arrives near camp, the field staff always have a treat seeing how much the infant has grown since they last saw him/her. Recently OFI field staff noticed that one of the other released female orangutans seems to be pregnant, so it will not be long before there is another infant orangutan to join the ranks! 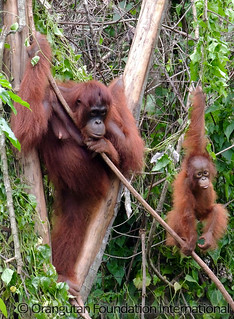 Observing a female orangutan with an infant in the wild is a special sight. It feels even more special when that mother has been released back into the wild after being rehabilitated at the OCCQ.

OFI works to protect and preserve the orangutans of Borneo and 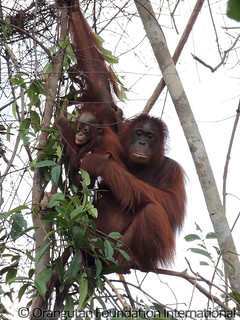 with the arrival of new infants, the cycle seems to have come full circle. These rehabilitated mothers, after learning the skills of the forest at the OCCQ, now have the opportunity to raise their offspring in the wild and pass on their skills, a chance that was brutally taken from them as infants when their own mothers were killed and they were snatched from their mothers’ bodies. After the trauma of losing their own mothers, these new mothers have been given a second chance to live in the wild with the knowledge that their offspring will be safe to live and learn.

So let’s celebrate OFI’s new mothers and all of the OFI staff who assisted these orangutans in reaching this important stage in their lives!

Reflections of a Volunteer