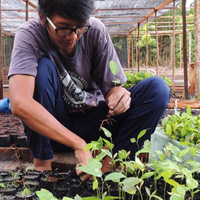 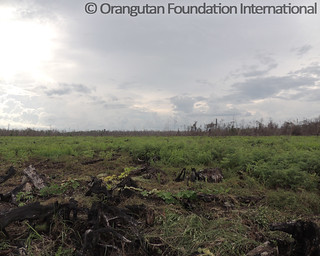 After fighting the devastating fires of 2015, Orangutan Foundation International (OFI) is as dedicated as ever to the protection of rainforest and orangutan habitat in Borneo. Unfortunately, large areas of OFI’s Orangutan Legacy Forest (OLF) that had been purchased and placed under protection burned in the 2015 fires, despite the relentless firefighting efforts of OFI staff. Almost 2,000 ha of this forest burned. Most of the burned forest consisted of peat swamp which is difficult to protect. You can stop the fires in the trees above the ground but you can’t easily stop the fires raging underground since the dry peat soil provides fuel for fires to continue burning underneath the forest. The fire then comes up in areas some distance from the initial fires through cracks and fissures in the ground. This is similar to the coal fires that have long been burning underground in Pennsylvania since the 1950’s. 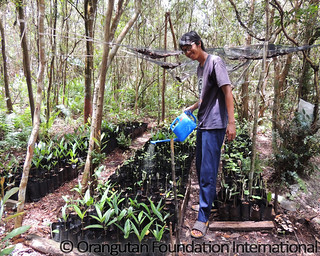 As the cleanup from the fires began at the end of the dry season, OFI Founder and President Dr. Birutė Mary Galdikas decided that OFI needed not only to protect forest, but also to reforest. OFI had planted trees in the past but these projects had only involved five thousand trees at a time. This new long-term project will be much more ambitious. It will probably take ten years to reforest the areas that were destroyed by the fires. Yet without taking this proactive step, orangutan habitat will continue to be fragmented and eventually disappear, without much chance of providing a future home for an increasing number of orphaned and injured orangutans under OFI’s care. Also, the habitat available to the relic wild orangutan population in the Orangutan Legacy Forest (OLF) has now been considerably diminished and needs to be expanded. 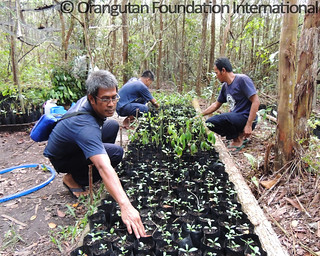 Such an immense project can be overwhelming, but with OFI’s energetic newly formed ‘reforestation team’ on the ground, things are already moving along. Initial replanting sites have been identified and work is underway to construct a nursery capable of holding the hundreds of thousands of seedlings that will be needed each year. In order to successfully reforest, the reforestation team needs to source both seedlings and seeds from locally growing tree species that are also native to the burned areas of the OLF. 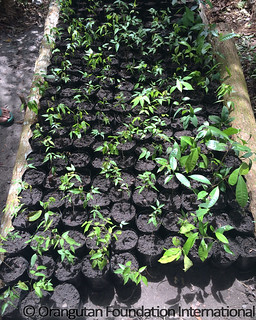 Part of the initial success of this project lies in the fact that the forest is not only vital for the survival of orangutans and other rare animal species, but is also significant to the tribal Dayak people of Borneo. As a result, the local OFI staff, many of whom are indigenous, have sprung into action, collecting seeds and seedlings from the forest and planting them in poly bags. A temporary nursery has already been set up at the Orangutan Care Center and Quarantine (OCCQ) and every day the staff tend the seedlings and bring more to the nursery. All local staff are passionate about this project. They understand the need for it. Everyone has invested great hope in these seedlings and their contribution to future forest regeneration. 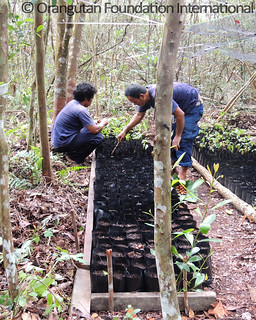 The reforestation project has just been launched and OFI is optimistic that it will be a success. To be frank, it has to be. With rainforests in Borneo continuing to disappear due to the irresponsible actions of palm oil, mining, and illegal logging companies and groups, it is key that we not only protect the forest that is still intact but also work to restore previously forested areas. The process will take time and may not generate habitat as ideal as the primary rain forests that recently burned across Borneo, but it will eventually provide homes for the many animals who inhabit the forest. In the continued fight to protect rainforests and orangutans, OFI will use all the tools at its disposal to ensure a safe future for wild Bornean orangutans and their orphaned ex-captive kin. 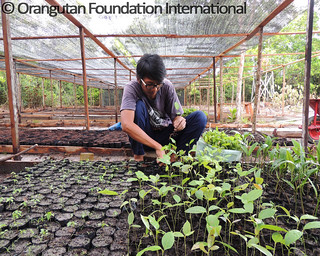 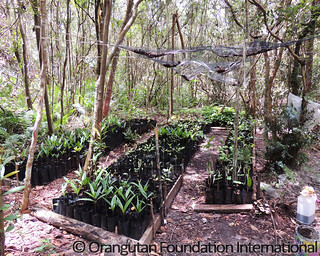