2005 was one of the most difficult years in the history of Orangutan Foundation International. But we persevered and survived. Most important of all, we were successful in guarding the integrity of Tanjung Puting National Park which contains one of the most important and largest wild orangutan populations in the world as well as being one of the largest protected areas of peatswamp and tropical heath forest in Southeast Asia. Palm oil concessionaires and the local government on the Seruyan side of the Park have put enormous pressure on the Forestry Ministry to move the eastern boundaries of the Park. The eastern border remains the most vulnerable area in the Park with the problems stemming from the presence of oil-palm plantations on the border.

Incursions into the Park

Local people from villages along the Seruyan River have started farming in areas cleared for plantation expansion, adjacent to Tanjung Putting National Park’s eastern border. A few of the local farmers have moved into the Park where they are clearing forest. All efforts to remove them have been stoutly resisted. The farmers claim the land belongs to the palm oil plantations, not the Park. Unfortunately, the farmers may be right. Once proposed eastern boundary changes have taken place, this area of the Park will belong to the oil palm concessions. The local farmers insist that they now have the right to farm the land until such time as it is planted with oil palms. 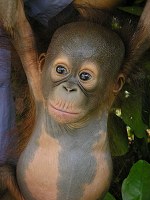 The seriousness of this problem for the Park, and the orangutans and wildlife populations within, cannot be overstated. The problem is so serious that it is almost impossible to counter at the local level. The palm oil companies are fattened by their profits and are using this money to widen their influence. The local government of the Seruyan Regency is plainly supportive of the plantations’ expansion into the Park and the Ministry of Forestry seems complicit as well. While the head of the Park agonizes over the incursions into the Park and the possible moving of Park boundaries, there is not very much that he can do.

OFI has had to fight the battle. Camp Leakey is located on the western side of the Park but we know that wild orangutans range far and wide. It is essential to keep the Park as large and inviolate as possible. We have held large community and stakeholder meetings to discuss border issues. We have stopped more farmers from moving into the Park. We have maintained pressure on local and regional governments to stop expansion of palm oil concessions into the Park and worked with the EU-funded Illegal Logging Response Center to generate concern within the central government. We have had meetings with the Ministry of Forestry in Jakarta. And we have continued to map the incursions and have incorporated them into the Park’s GIS database. We have even brought up the issue with the President of Indonesia himself.

But the eastern boundary is not the only problem. Several villages were incorporated into the Park on the western side when the Park was expanded in 1996. These villages now claim large enclaves within the Park. Fortunately, community meetings, which I helped arrange at the grassroots levels of government, have had effect. Village chiefs and community leaders agreed to form a committee with the Forestry Department and OFI that will make recommendations on village and Park boundaries. During the past year we have also increased and improved community and Park patrolling. We have constructed, equipped and staffed four guard posts at Natai Tengah, Tanjung Hanau, Sekonyer Kiri and Pulau Ulin. The last guard post is particularly crucial since it guards a virgin strand of exceptionally large ironwood trees that, miraculously, was never discovered by local people and, thus, never logged. This is probably due to the location of this monumental stand, which is in the very center of the Park and surrounded by deep swamps. It takes us thirteen and a half hours to walk to these ironwood trees from our closest guard post. The monumental size of these ironwoods suggests an age of, at least, five hundred years, perhaps a thousand years, for these trees.

We have continued to provide logistical support for the Forestry department’s guard posts and the Park rangers stationed there. We also conducted a two-week GIS (Global Information System) training course for OFI staff, Forestry staff, government officials, and members of other NGO’s as well as held a three-day training session for field staff on the use of GPS (Global Positioning System) units. We have signed another agreement with the Forestry Ministry extending OFI’s responsibilities. Reports of illegal logging on both the western and eastern sides of the Park have been followed up and the illegal activity stopped. We also undertook a large anti-illegal gold mining patrol in the northern part of the Park which ended the gold mining activity there.

Within the last month we chased out dragon fish poachers who had invaded the Park’s shallow lakes, swollen from the rains of the monsoon and full of breeding dragon fish. These ancient fish are highly prized in China and the rest of Southeast Asia as harbingers of good fortune. When fully grown, a prize specimen can be worth as much as twenty thousand dollars. The local poachers come in, spear the mouth-brooding parent fish (mistakenly called mother fish by the poachers, actually fathers) and take the small live fry, which are then quickly shipped to Singapore, China and Hong Kong for big profits. Fortunately, we were able to stop this poaching in its tracks. The poachers come in at night and lure the parent dragon fish to the surface of the water with lights. We also followed the lights!

This is not all that we accomplished. We received over 60 orphan orangutans and since 2005 is not yet over, will probably receive a few more. The last infant just came days ago to Orangutan Care Center and Quarantine. Baby “Lear” was brought to us by a man who claimed that he had found the orangutan infant alone in a nest at the top of a felled tree. The man was clearing tropical rain forest for a palm oil plantation near the Park. He claimed that the orangutan mother was nowhere to be found. The infant “Lear” is tiny, has no teeth and is, at the most, three months old. There must have been a mother present. What happened to her? Indeed, the man bore vivid healing wounds that indicated that an orangutan had bitten him on the hand. To all of us, it looked very much like the mother orangutan had lost her life fighting this man for her baby. Upon our questioning, the man hurriedly surrendered baby “Lear” and quickly left.

OFI has still so much to do but Tanjung Puting National Park still stands. Among our many accomplishments during 2005, protecting the integrity of the Park and its one million acres of forest was probably one of OFI’s most important successes.

Thank you very much for your support over the past year. With your help, together we can continue to save the orangutans and their forests.

Rusti settling in at new sanctuary in Hawaii!