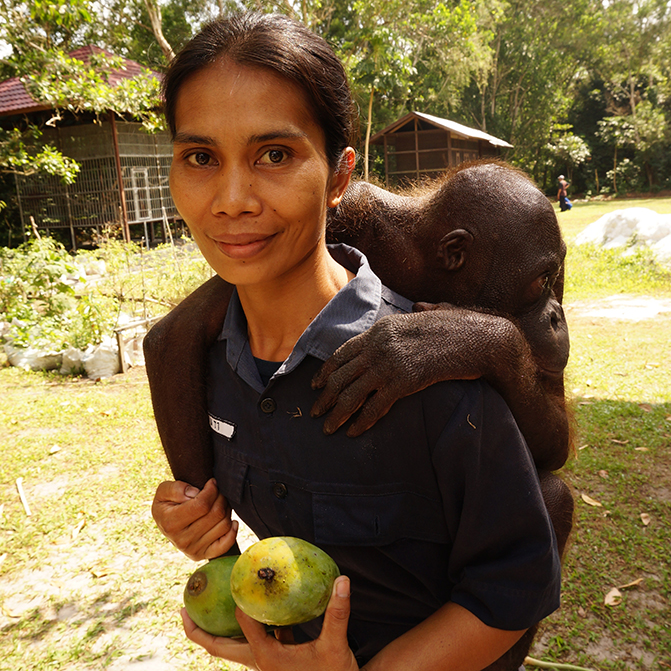 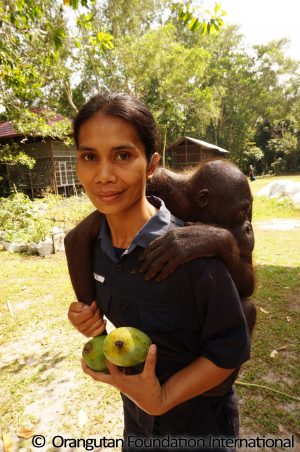 When caregivers at OFI’s Orangutan Care Center and Quarantine are having difficulty handling an orangutan, they often do the same thing: turn to one person for help. That person is Ibu Tuti.

Small of stature and unassuming, Ibu Tuti seems like an unusual choice as an orangutan handler for the more challenging cases. But when you observe her interact with the many orphaned orangutans who live at the Care Center, it is no surprise that her aid is so often requested. Simply put, she has a “way” with orangutans. Whether it is an ape that does not want to come down from the trees, or one who refuses to eat, Ibu Tuti seems to know just the thing to say and just the thing to do. She has a warm and gentle presence, felt by both ape and human alike. Years of dedicated work have given her a deep and nuanced understanding of these complex creatures. Ibu Tuti has filled many roles during her tenure at OFI but she currently acts as one of OFI’s longest serving caregivers.

As a young girl Ibu Tuti lived in a small Dayak village that was only accessible by river. She grew up with many animals that also lived in her village and dreamed of one-day working with animals professionally. Shortly after marrying at the age of eighteen, Ibu Tuti followed her husband into the forest where he worked as an assistant at Camp Leakey, Dr. Biruté Mary Galdikas’ famous research station in Tanjung Puting National Park. Tuti accepted a position cooking the meals for the all the staff who lived and worked at the Camp. It was during this time that Ibu Tuti discovered her love for orangutans. She admits that she was at first afraid of the ex-captive and wild orangutans that lived in the forest surrounding Camp Leakey. But after only a few days she had warmed to their presence. Ibu Tuti still thinks fondly of those early days working in the park and living in such close proximity to the orangutans. “The sounds at night-time, the river, and the orangutans climbing in the trees… It was very beautiful,” she recalls “I miss it all the time.” 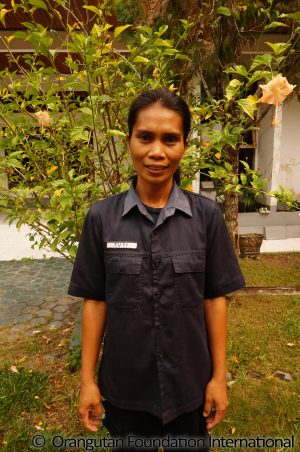 Following her tenure as a cook at Camp Leakey, Ibu Tuti accepted a position at the Orangutan Care Center and Quarantine. It was in this role that she found her calling as a full-time orangutan caregiver. In her personal life she was raising two children. At work, she was becoming a surrogate mother to many orphaned orangutans. The experiences closely mirrored each other and allowed Ibu Tuti to witness the many ways orangutan behavior reflects human behavior. “I still learn so much from orangutans,” she says. “The way they socialize, the way they raise their young, the way they comfort each other… They are similar to us in so many ways.”

From the beginning, Ibu Tuti enjoyed every interaction with the orangutans, from the day-to-day to the special cases. However, she quickly found her niche working with the “special-needs” orangutans, a responsibility she maintains to this day. Her role at the Care Center, providing extra care for the sick and skinny orangutans, has proven invaluable to the organization.
Many orangutans arrive at the OCCQ having experienced some sort of trauma, often in the form of human brutality. Many have witnessed their mother being killed and experienced the pain of being ripped from a life in the forest and forced to a life in a cage. It is not uncommon for orangutan orphans to display signs of stress or anxiety. Captivity is not where they belong, even when they are in a rehabilitation center like the OCCQ. When orangutans at the Care Center struggle to maintain their health or adapt to their captive surroundings, Ibu Tuti steps in. She is some-what of an “orangutan-whisperer,” knowing just how nurture these “fallen birds” back to health. She often assists the veterinarians in their procedures and specializes in preparing diets and enrichment for orangutans who are too skinny or need extra care. 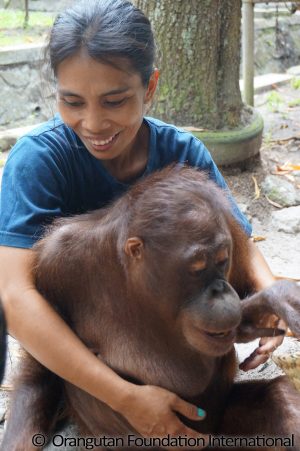 This position has allowed her to build strong connections with certain orangutans. One of her closest relationships is the one she has with orangutan Saddam. Saddam medical needs that require daily special care. Because of on-going development issues, he hasn’t been able to grow hair or maintain a good weight. “Saddam needs a lot of extra love,” Ibu Tuti explains “but working with him is one of my favorite parts of my job.” You can often find her giving him his medicated bath or sitting with him when he gets his veterinary care. She always remembers to bring him a hibiscus flower during these procedures because she knows they’re one of his favorite snacks. Saddam greatly benefits from the extra attention Ibu Tuti provides. Not only has his overall health and weight improved but he has begun to grow small tufts of hair around his shoulders and arms, a promising sign of recovery!
The Care Center has seen many orangutans flourish under the care of Ibu Tuti. Of course, there are challenging parts to the job. Her patient, diligent nature does not go unnoticed and she is often called upon to help with difficult orangutans. It’s a responsibility that comes with its risks. Like humans, orangutan emotions in a single day can range from pleasant and playful, irritable and melancholy, gentle or manipulative. It comes with the territory. Wild animals can be unpredictable and, at times, dangerous. She admits that there have been scary moments but that she’s experienced more happy times than anything else.

While Ibu Tuti loves the friendships she’s made with many orangutans over the years, nonetheless her favorite part of the job at OFI is seeing the orangutans released back to the wild. “The best thing about working with orangutans is seeing them climbing in the trees. I love to see them in the wild, where they belong.” With the help of Ibu Tuti’s dedication, many orangutans have been able to claim their second chance at freedom!