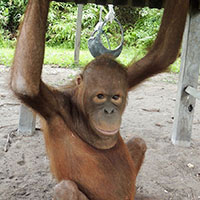 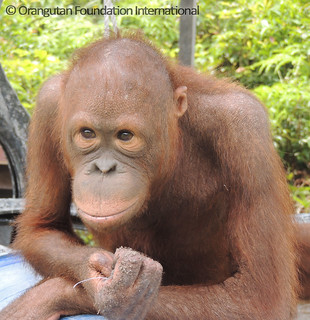 Each and every orangutan at the Orangutan Care Center and Quarantine (OCCQ) in Kalimantan has an individual personality that distinguishes them from their peers. Choosing just one orangutan to feature as each month’s “Orangutan of the Month” can often be a taxing endeavor as the OCCQ oranugtans all stand apart and are all unique. But this month, there was no doubting that the quiet and captivating charm of little Yosuke should be highlighted. This young juvenile male orangutan is a special little guy with a personality that will leave you rolling in laughter at his antics. While every orangutan is special, Yosuke caught my attention so much that I decided to write about him as OFI’s Orangutan of the Month.

Yosuke is an orangutan who initially fades into the crowd. When you are first introduced to his cohort of rowdy male juveniles, he doesn’t immediately stand in the foreground. Between having other orangutans throwing themselves at you from above, or trying to sneakily steal your camera, Yosuke blends into the background. In fact when you first meet him, Yosuke is quite shy and prefers to stay away from people he doesn’t know. Yosuke will hang around in the rafters of the playground structure or will play with his friends. Slowly though, you become aware of an orangutan who is a little smaller than the rest gazing at you from above. With a head tilted to the side and one eyebrow raised in quizzical question, Yosuke will study you intently. If you catch his eye he will quickly pull his lips up and show you his teeth. This is not a threat but rather a playful gesture. Once Yosuke feels comfortable he will begin to come into the foreground and that’s when his big personality begins to shine through! 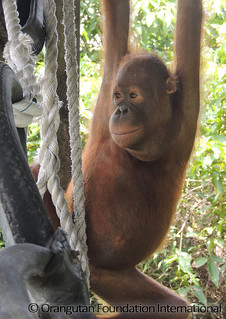 Yosuke arrived at the OCCQ as a tiny six-month-old infant. The man who brought Yosuke to OFI claimed that he purchased him from the bird market in Pangkalan Bun where a stall owner was allegedly offering Yosuke for sale. After arriving at the OCCQ as a traumatized orphan, Yosuke found his feet within a group of other young, orphaned male orangutans. With friends Albin, Betelnut, Franz, Joel, and Piko by his side, these six juveniles daily take on the playground together.

Male juvenile orangutans are in a transition phase that is interesting to observe. They are beginning to crave the independence of the adult male orangutan, but they still need the attention and reassurance of a hug from their caregivers. Juvenile Yosuke is on the cusp of manhood, so to speak, and as such is beginning to crave greater independence from the group. Yet he still relies upon his friends for daily play and for comfort when they curl up together to sleep at night. Recently Yosuke has begun to suddenly dive off into the bushes when no one is watching and to lead his caregivers on a wild chase as he heads towards nearby houses in the local village. 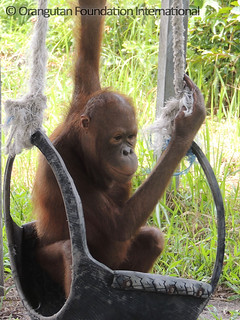 In Arthur Conan Doyle’s classic detective books ‘Sherlock Holmes’, the main character Holmes once remarked that his companion Dr. Watson “had seen” but not observed. Yosuke takes after the fictional Holmes in that he not only sees but also observes everything around him. If he were human, Yosuke would most likely be a detective! Yosuke always takes everything in and carefully analyses before making a decision. His curiosity often reminds me of a meerkat. He always seems to know what is happening in the playground, and you can’t help but laugh when he observes his friends during play-time. Often you see Yosuke rise up from behind a bench in the playground, big eyes wide, turning his head from side to side and then quietly sinking back down – just like a meerkat! Once he knows where everyone is and what they are doing, Yosuke expertly navigates his way around the playground to join in the fun.

When Yosuke swings in the playground he often incites laughs from his caregivers. Yosuke has quite a flamboyant way of swinging on the ropes, often flicking his wrists in an elegant fashion. You could say that Yosuke is doing aerial ballet by the way he moves along the ropes of the juvenile playground. Yosuke is never rough and tumble like some of his peers, and when he swings his legs he sometimes looks as though he is preparing to perform an artistic flip or maneuver with gracefully pointed toes. Yosuke is always gentle with his fellow playmates and caregivers and doesn’t play rough. Although he might physically be one of the smallest orangutans of his group, Yosuke is actually a year or two older than most of his friends. Though he is little, his seniority means that he is never bullied or picked on by the other orangutans. During his daily outings, Yosuke is happy to be with his friends or to occupy himself in some solo-playground fun. As the day wears on he can sometimes become a little bit tired with all of his exuberant playing. This is the time when he starts seeking out his caregivers to chauffer him around the playground. Climbing onto their backs he will dig his heels into his caregiver’s back, standing up tall as they walk him to another part of the playground. From his vantage point he can see all of the action and observe. 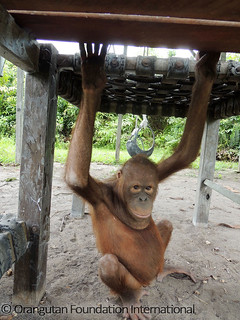 When Yosuke looks into your eyes you often wonder if he knows more about the ways of the world than you do. Then he will put his head to one side and suddenly bound off to swing with energy in the playground and you’re reminded of his youth. Yosuke is a special orangutan who epitomizes the intelligence and complex nature of his species. He is inquisitive, smart, funny, and a little bit naughty, but also kind and thoughtful. Yosuke is a spirited orangutan who is sociable but also perfectly unique. As a juvenile orangutan, Yosuke is still analyzing the world and making sense of it all. With his powers of observation, Yosuke will continue to thrive and learn more about the forest as he grows older. One day, he will return permanently to the wild, and be able to spend all day observing forest life from high in the trees.

Orangutan of the Month: Mighty Montana

Employee of the Month: Ibu Ipuk