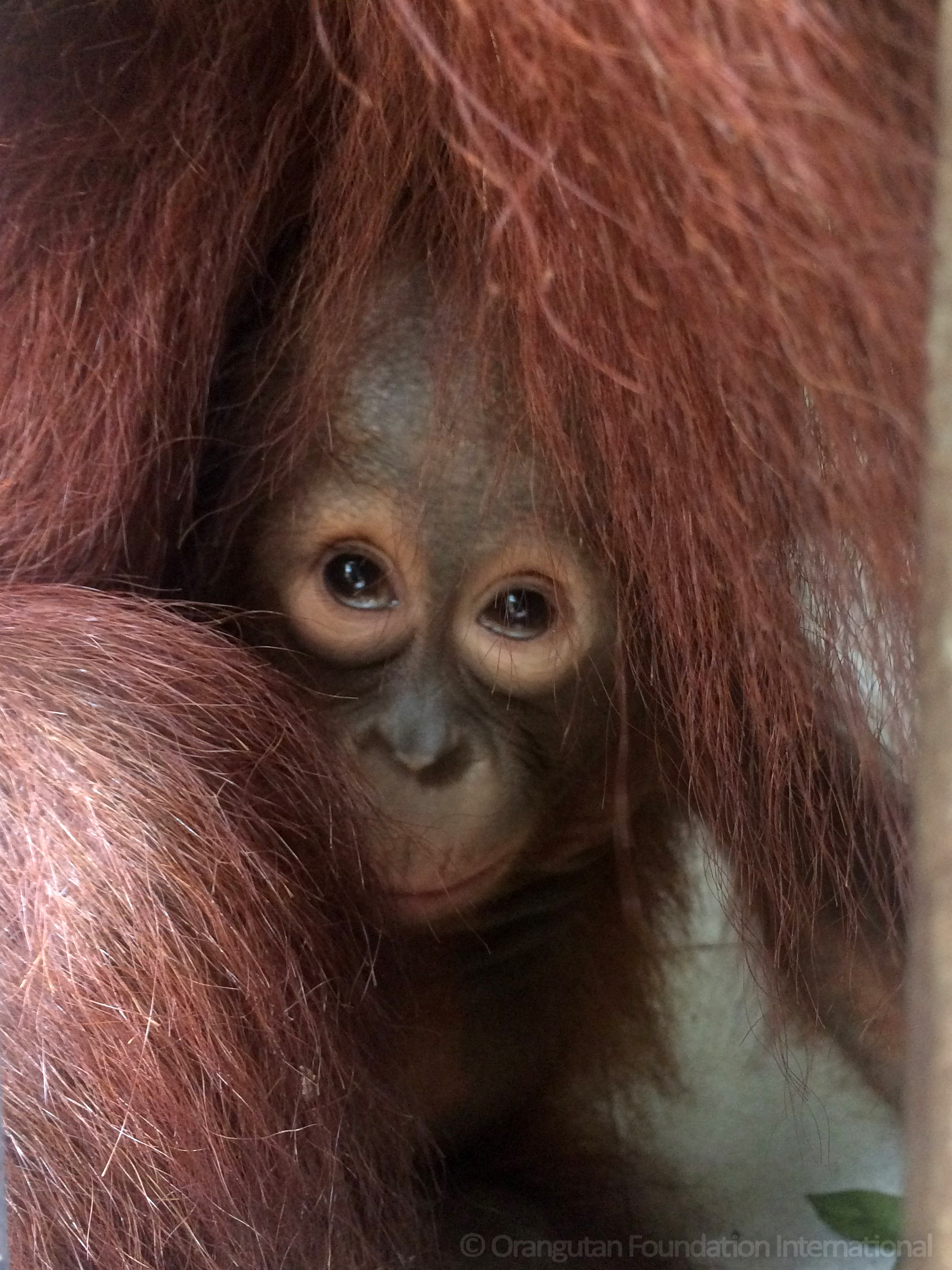 Enon came to OFI as a young female orangutan after years of captivity. Orangutan Foundation International (OFI) worked hard to rehabilitate her. In 2014 we finally released Enon into the deep forests of Tanjung Puting National Park where we thought she would live out the rest of her life safe from human attacks. But we were wrong.

In February, at one of OFI’s feeding platforms, Enon was sighted with her infant Ernie, exhibiting high levels of distress. Ernie had been catastrophically wounded. A straight and very deep cut had been made in his side. One of our veterinarians was immediately called to the site to give emergency medical care. When the OFI veterinarian arrived, Ernie’s intestines were protruding outside his body through the cut.

…a cut that straight and that deep was likely caused by a machete…In other words, Enon and little Ernie were probably attacked by poachers.”

We had no choice but to take Enon and Ernie back to OFI’s Orangutan Care Center in Pasir Panjang, Central Borneo. There, Ernie was successfully operated on. The veterinarian put back his exposed intestines into his body and closed the wound. Enon and Ernie have remained at the Orangutan Care Center where OFI’s veterinary staff can monitor Ernie for signs of infection or complications. Soon both mother and son will be released at the feeding station where they were encountered by our staff. This location is in the deepest most isolated part of Tanjung Puting. It is highly likely the injury was caused by humans. While we cannot know for sure, a cut that straight and that deep was likely caused by a machete or perhaps by the dangerously sharp tool used in shredding trees in the search for the fragrant wood called gaharu, which goes for up to $1000 per kilo in the Middle East. In other words, Enon and little Ernie were probably attacked by poachers.

Last year OFI asked for support in increasing our patrols to protect Tanjung Puting from a new influx of poachers seeking songbirds, fragrant gaharu heartwood, and sometimes even orangutans to sell in Java and abroad. Thanks to your generous donations, we have already seen results. Some of the poachers are already in jail. But Ernie’s brutal injury reminds us that the threat is ongoing and still very real.

Given the severity of Ernie’s wound, it is a little bit of a miracle that we were able to give him back his life. One day Ernie may grow into a large, long-calling cheek padded male with offspring of his own. None of this would be possible without OFI’s Orangutan Care Center. OFI’s dedicated staff and our up-to-date medical facilities saved Ernie’s life. Currently, OFI staff are providing medical treatment, rehabilitation, and reintegration care for 320 orangutans, including 22 tiny infant-orphans whose mothers have been killed.

OFI’s Orangutan Care Center costs up to $1.2 million a year to maintain. That includes the salaries of the 140 people who work there, daily food for the orangutans, the orangutan rescue and release teams, medical equipment, construction of enclosures, daily enrichment activities, as well as local outreach teams to help educate people on how precious orangutans are to Indonesia and to the world.

Please consider giving as much as you can to help us provide year-round care to the hundreds of orangutans who depend on that care for their very survival and ultimately, their return home to the forest. The biggest threat to orangutans comes from humans. But we can become the orangutan’s greatest allies by supporting OFI’s Orangutan Care Center where innocent orangutans like Ernie get a second chance at the life they deserve. 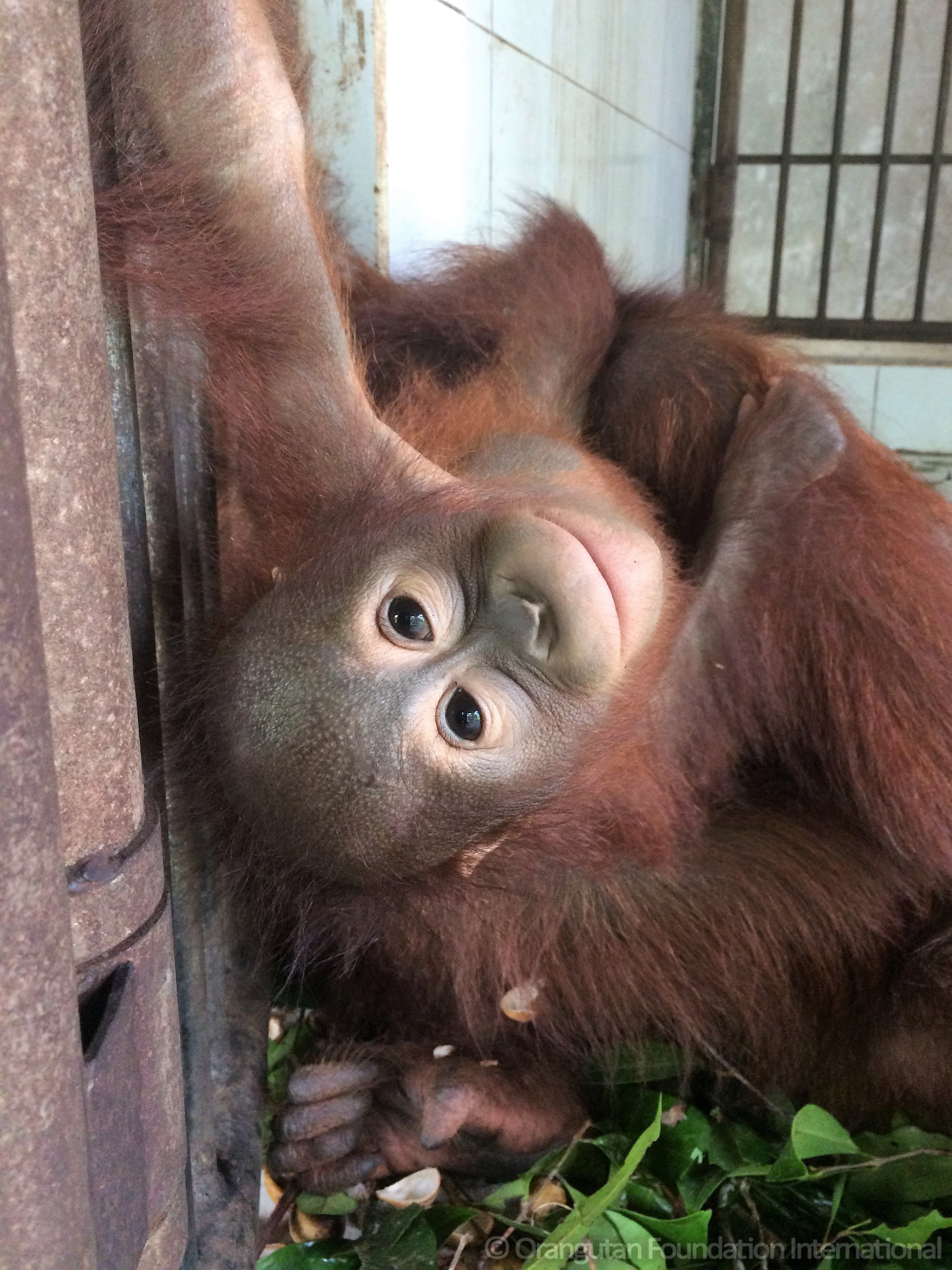 Your donations helped save Ernie’s life!

But each year, more orangutans come to the Orangutan Care Center, orphaned, sick, and injured. They need your help to find a way back home.