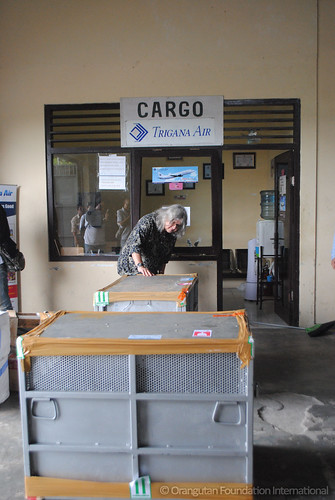 Fourteen year old orangutan Jacko was discovered in August of 2014, living in a private villa in Cianjur, West Java. “The people there kept him in an extremely sad state,” explained Femke den Haas, co-founder of Jakarta Animal Aid Network (JAAN) who helped rescue Jacko. “Jacko was found in a 2 meter high bamboo crate which did not allow him to stand up. Underweight and hair infested with fleas, he was kept amongst years’ worth of accumulated rubbish, urine, and feces with no shelter from the rain or equatorial sun. He was emaciated. In fact, we did not think he was going to survive,” Femke continued.

The Jakarta Forestry Department rescued Jacko and placed him in JAAN’s rescue center. After a health evaluation and DNA checks to ensure he was actually from Borneo, Jacko was was relocated from Jakarta to the Orangutan Care Centre and Quarantine (OCCQ) managed by OFI in Indonesian Borneo. 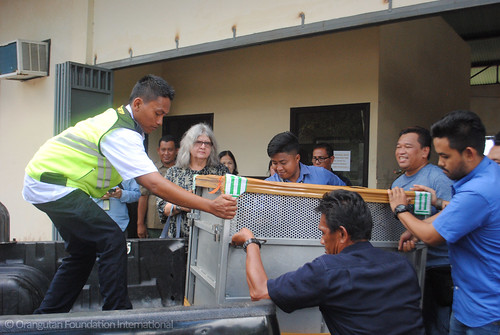 Malayan sun bear Chico’s rescue is a testament to the power of social media. In 2016, Ibu Ismutia noticed a young sun bear in a small cage at Pantai Mutiara harbour in Jakarta. She publicized her sightings over Twitter. Not long after the story spread far and wide, “JAAN” and the Forestry Department located and rescued Chico.

JAAN was established by Femke den Haas, Karin Franken, and Natalie Stewart in 2008 as a resource for people to contact and report cases of animal abuse in Indonesia. Jacko and Chico were accompanied by the JAAN team and Forestry officials during their transport via Trigana Air Airlines from Jakarta to Pangkalan Bun, where they were welcomed by Dr. Biruté Mary Galdikas and OFI staff. A small press conference was held to share information about animal rescue and the illegal wildlife trade in Indonesia. 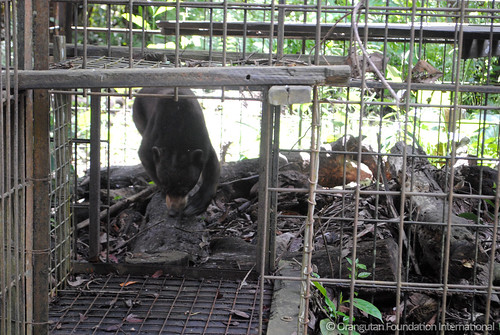 Chico and Jacko were moved into OFI’s Orangutan Care Centre and Quarantine (OCCQ). Upon release into their new spacious enclosures, each had instantaneous responses conveying intact wild instincts. Jacko immediately started swinging in his enclosure as though he was brachiating in the forest. Chico, who had been living in a confined steel crate, moved straight towards the logs and natural matter in his enclosure to begin digging. A good beginning for their journey home to the forest!

“These animals are native to Kalimantan. For now, we will wait while they go through the process of rehabilitation at the Care Center. When everything is ready, the location and the animal, they will be released,” said Forestry Department official, Pak Agung. 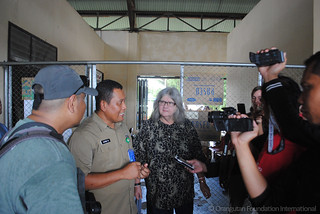 “It takes years to rehabilitate an orangutan,” explained Dr. Galdikas, President and founder of OFI. “We will take care of Jacko. When he can make a nest and find his own food foraging in the trees, we will release him into the forest. But the process is not quick and easy. It may take several years.”

For now, the two animals will benefit from around the clock care at the OFI Care Center where they will have the largest living spaces they have known during their many years in captivity. OFI will prepare them for a much brighter future involving their eventual release back to the wild.