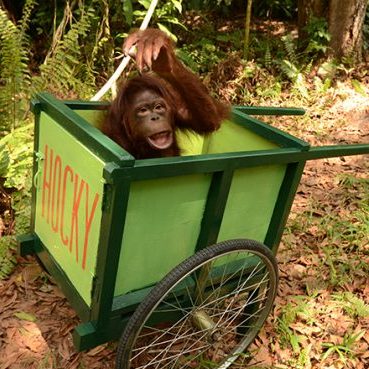 Many good teams are trios. The Three musketeers, Charlie’s Angels, or for you primate fans, Leakey”s Angels. This last “team” consisted of three female primatologists Dr. Louis Leakey encouraged to study wild great apes in the 60’s and 70’s. The African ape ladies.were Jane Goodall and Dian Fossey, while the only ‘Angel’ in Asia was Dr. Biruté Mary Galdikas.

After 40 years of studying orangutans in their native habitat in Borneo, Dr. Galdikas, co-founder of Orangutan Foundation International now has her own angels. This special team consists of three orangutans currently living at OFI’s Orangutan Care Center and Quarantine; Hocky, Hangki ,and Bali.

Honestly, it wouldn’t be fair to call these girls ‘Galdikas’ Angels’, since she considers all 330 orangutans currently in OFI’s rehabilitation program to be angels. However, these three are special.

What makes Hocky, Hangki ,and Bali different from the other orangutans at the Care Center is that they are all partly paralyzed. For Hocky, this means that the left side of her body now has highly reduced functionality after she suffered a stroke,. In the course of an evening, Hocky’s life changed forever. Her left arm is now permanently curled heavily inwards and her left foot is not able to grasp well. Her days of scampering in the treetops are over for now.

An unknown disease hit young Hangki several years ago, paralyzing her from the waist down. Hangki suffered this fate in the Lamandau forest, after being released from the Care Center. While in the jungle, not only did shes lose the ability to move her legs but she almost died.She was brought back to the OCC&Q and cared for night and day.It took weeks but finally it became clear that she would survive although paralyzed from the hips down.Here in the Care Center she is now offered a safe home and a place where care-givers and medical staff work on improving her condition.

Last but not least: Bali. This energetic girl was together with two other orangutans in a sleeping cage when an unknown disease simultaneously affected all three of the orangutans at once3.. One of them did not survive this attack.The other one was Kiki, who was paralyzed and only recently died (a link to Kiki article). Bali is the only surviving orangutan from that cage , and while her legs cannot move very much, her active mind and mischievous spirit make her an all-around favorite.

Despite their disabilities, these three females are also in the process of rehabilitation, and are being stimulated to redevelop their muscles and become self-reliant again. As a matter of fact, Dr. Galdikas recently spoke of a plan to work on Bali’s arms and make them strong enough so that Bali will be able to return and survive in to the wild under close supervision!

Hocky and Hangki are still far from being released Happily for the staff and volunteers,, they are both the sweetest orangutans imaginable: gentle, careful, innocent and calm. However, they all need lots of special attention and care in order to give them a chance to flourish and improve their condition.
In this weekly blog I will keep you updated on how these three “special needs” orangutan angels are doing and how the work of the staff and volunteers is helping improve their physical and mental condition.

Next week’s post will be about Hocky, since she will be moving into a spacious new sleeping enclosure!