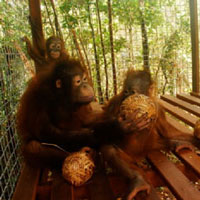 Those who have read our previous Enrichment Volunteer Jessica Pearl Parker’s blogs don’t need to be told that Jessica loves Hockey. In fact, Jessica loves Hockey so much and feels so passionately about enriching Hockey’s life that Jess started a private fund for Hockey. The goal of this fund was to build a special sleeping cage for Hockey in which she would have more space to move around and more opportunities to develop her muscles. Well, guess what… the cage is finally finished and it turned out to be absolutely enormous!

Unfortunately, realizing her dream for Hockey has been a mixed event for Jessica. In the middle of construction she caught malaria and had to leave Indonesia early, never seeing the final result of her work. However, I know that she will be thrilled to see that Hockey’s new cage is a blessing. Not only for Hockey, but for her entire community!

The news that Hockey’s cage was completed reached the orangutan baby nursery in the morning. Excitement was in the air at the end of the infant orphans’ forest session, when all the babies and young orangutans go out and play. The long awaited moment has arrived! While one of the caretakers carried Hockey up the stairs (yes, the cage even has stairs, it’s that big!!) Everyone held their breath, awaiting her response.

After looking around for a few seconds in confusion, Hockey immediately started to drag herself to every corner of her new home and obviously enjoyed the freedom of moving around in so much space! Success!! Happiness!!

The best thing about Hockey’s cage is that it provides plenty of room for other youngsters to share it with Hockey. This is not only beneficial for the other orangutans, which get bonus hours of playtime in the spacious enclosure, but for Hockey as well. She is obviously stimulated by their companionship… It is a joyful sight to see Hockey actively moving around, playing with her peers and enjoying her new home. Another great feature of the new enclosure is that on rainy days, as many orangutans as possible are placed with Hockey. This way everyone is still able to enjoy precious hours of playtime, which previously wasn’t possible in bad weather conditions.

After visiting the new cage Ibu Maryanti, our permanent Enrichment Coordinator, and Ms. Kylise, the new enrichment volunteer, made plans to further enhance Hockey’ s cage. Plans include hammocks, shelves and oral play tools for Hockey. This will turn the cage into an enormous playground which can be enjoyed by everyone at the orangutan baby nursery.

Even now Hockey and her friends don’t have to worry about being bored. The enclosure is full of plastic tubs, balls, water bottles, wooden peanut balls, and many other play items. It’s also not uncommon to see care-givers sitting in the cage. Here they play with Hockey and stimulate this friendly orangutan to interact with her peers and to exercise physically. Although it is still early to tell, it appears that Hockey’s condition is already somewhat improving. She is climbing with her good arm more regularly and her balance seems to have improved as well.

Hockey’s cage is a beautiful example of the difference that a single person can make in the life of one special orangutan. Thanks to Jessica’s passion, effort, and dedication the Care Center has gained yet another effective tool for rehabilitating, teaching, and engaging the orangutans until they are re-released into the wild.
The creation of Hockey’s new home has been an inspiring project. In the future, OFI hopes to provide more housing and enrichment for the hundreds of orangutans in the Center.