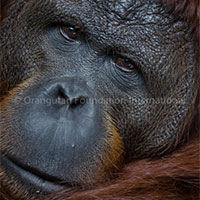 Meeting Congo at OFI’s Care Center and Quarantine in Pasir Panjang, Kalimantan Tengah, is something that visitors don’t easily forget. He is impressive bcause of his large size, lustrous, long hair and his sheer charisma. He seems as tall as a human being when he stands up.

He is still a subadult male with a handsome face surrounded by growing cheekpads. He has a large throat poach. When he sees people he particularly likes approaching, he often whirls around, his long orange hair shining in the equatorial sun, his eyes sparkling with excitement in expectation of possible treats. When we see him like this, we can’t but think about how different his life would have been if he had had a chance to grow up wild, by his mother’s side. By now, he would live a semi-solitary life in the forest, probably beginning to fight for dominance with other orangutan males in the area. 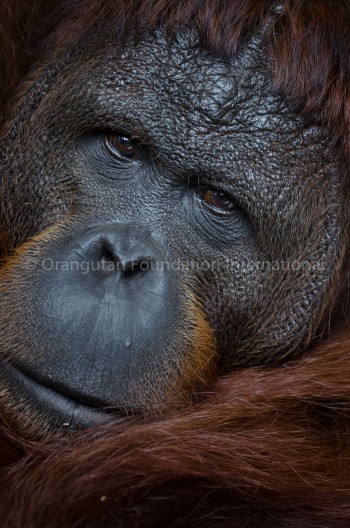 Congo initially seemed to adjust somewhat to his free-roaming, new life in the big forest. He regularly returned to the feedings, looked better than before, and continued to grow. However, he often stayed on the ground and sometimes even made night nests on the forest floor. After around 4 months, Congo missed several feedings in a row. A search team located him in the forest with large wounds all over his body, most likely the result of a fight with one of the wild adult males in the area. In particular, Congo had been bitten in the jaw. The other male’s canine had pierced through the flesh almost to Congo’s jawbone. Congo had to return to the Care Center for medical treatment, but he recovered relatively quickly and was released again in March 2011. Everything went well for the next 6 months. Congo did not get involved in serious fights with other orangutans, and he seemed happy and healthy, enjoying his freedom the second time round. We noticed that this time he seemed to be on the ground less and in the canopy more.

Unfortunately, Congo’s newly found freedom did not last very long. In September 2011, Congo wandered into a palm oil plantation which was some distance from the release site. The workers had experience with another female orangutan who often wandered into the palm oil plantation. This female liked to be brought back to the release camp in the back of OFI’s pickup truck. Congo was not yet particularly big. It was dusk so perhaps they really couldn’t make out Congo clearly. They took Congo’s hands and tried to pull him into the back of their pickup truck. It was a case of mistaken identity! Congo had absolutely no experience riding in a pickup truck. He objected violently to the two workers trying to drag him into the vehicle. Thanks to OFI’s training efforts (which were done entirely on a volunteer basis by Dr. Galdikas and local staff), one of the workers knew exactly what to do. He shouted at the top of his lungs and fought back as hard as he could. Congo let him go with minimal injuries. Unfortunately, the other worker was not so fortunate. He did exactly the wrong thing! He fainted! Congo bit him repeatedly on the leg. The worker was not able to use his leg for months afterwards.

Fainting was the wrong thing to do for a reason. You show submission to an orangutan by squealling as hard as you can and running. This worker refused to run so Congo showed him who was “boss!” The sem-solitary orangutan does not have a repertoire of stereotypic submission gestures or postures. For instance, chimpanzees show their behinds to indicate submission. Orangutans can only squeal and run!

Congo had to return to the Care Center again, where he has remained since. 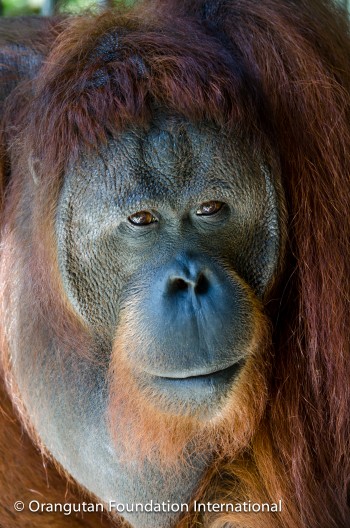 Congo is now too large to participate in the daily forest outings. Because of his great strength, he could easily hurt other orangutans and humans, and it would certainly be difficult to convince him to return to his enclosure in the evening. Therefore, Congo has to remain with us at the OCCQ until a new release site, preferably in a forest far away from plantations and human settlements, is established. Such safe and secure forests are now rare because of the massive destruction of rainforest in Kalimantan due to the establishment of palm oil plantations. It might be a while before Congo can be safely released again. We are trying our best to locate suitable forest but it is a difficult task.

Although the change from living free in the forest to returning to an enclosure must have been dramatic, Congo adjusted well to being back at the Care Center. In a way, it must have been a relief for him not to encounter fierce wild male orangutans who seemingly attacked for no reason and human strangers who wanted to kidnap him and take him who knows where! In general, Congo seems to have a relaxed attitude towards life, chilled and laid-back. This attitude became much more noticeable after Congo returned to the Care Center and Quarantine for the second time. What was particularly noticeable was his change in attitude towards the people at the Care Center.

In the past before the second release, Congo had been occasionally hostile towards OFI caregivers and rangers. He seemed somewhat confused during his first release. He ignored other orangutans although he did not avoid them. He seemed ambivalent towards humans. But once back in the Care Center after the second release, it seemed Congo had figured out that the Care Center was not so bad. Being in the cruel, wild world had given him a new perspective. Nobody attacked him or tried to drag him away from the safety of his enclosure.

Sometimes it seems that he’s actually fond of us at the Care Center. He even showed his feelings by occasionally kissing a (male) long-term volunteer. This was truly a marked change from the Congo we knew before the first release. At that time Congo was skinny, bald, and a bit aggressive. The magnificent animal we now have before us every day could easily rip apart any human but instead he lightly touches our hands or shoulders and gives us one of his enrichment branches to get our attention. He has become a sweetheart. All hostility towards his caregivers is gone. We are very eager to see him go back to the wild for a third time. We know this time he will make it!

At the Care Center Congo is always active and alert, closely observing his surroundings. He is full of energy, often swinging from side to side, ready for the next adventure. Since his second return, his playful nature has blossomed, and he seems to appreciate the time his human friends spend with him. When we stop by his enclosure after he has received his evening foliage for nesting and foraging, he often sticks a branch out through the bars. When we try to catch it, he jerks it to the side, and he is usually very good at estimating how fast he has to move the branch so that we won’t be able to grab it! When we finally manage to get the branch from him, we turn the game around and now it’s his turn to ‘catch the branch’. After a while, Congo usually decides that using a branch with all its leaves still attached makes the game too easy, and he removes them as well as all the side branches and continues playing with just a stick.

Congo is not only playful, but also a considerate orangutan. When we bring him treats such as peanuts, he often offers some food from his feeding tray in exchange, usually some leftover bananas. Indeed, it seems that he likes to keep his feeding tray stocked for various purposes. If anyone happens to walk by his enclosure without any treats or without stopping to interact with him, he will often throw bananas or banana peels to show his disapproval! 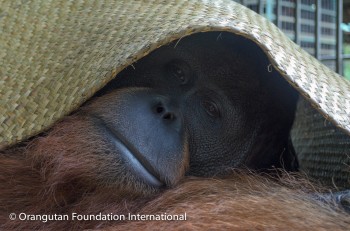 To keep Congo stimulated until he can be permanently released again, Care Center staff give him different types of enrichment items. One of his personal favorites is reed mats, which he likes to wrap around his body.

Congo has a little bit of a naughty side as well, which probably comes out more when he gets bored. Recently we noticed him playing with a T-shirt in his enclosure. Apparently, Congo had taken the shirt from the staff member who was cleaning his enclosure. Fortunately, this young man was quick enough to jump out of his shirt before Congo could pull him against the bars. Satisfied with his new ‘enrichment item’, Congo played with the shirt until he had ripped it into tiny strips of blue cloth that then fell below his enclosure.

Congo showed his energetic spirit in the forest as well. After Congo was released for the first time, he not only returned to the feeding platform occasionally, but also paid visits to the release camp. Whenever Congo found a ladder, he used it to climb to the roof of the camp building. He often moved the ladder to different parts of the roof depending on which part he wanted to inspect more closely.

A couple of weeks ago we found him in his enclosure playing with a piece of plumbing. The plumbing was part of the system that delivers water to the enclosures. The piece that Congo took came from outside his enclosure. Water was pouring out because of the missing middle piece. We are not sure how Congo managed to get to thisparticular piece of plumbing, but he must have been planning his moves for a while. The plumbing was installed on the far side of a concrete pillar well outside of his enclosure. From the inside, Congo could neither see it nor reach it with his hand, but he must have known it was there since the caregivers open and close the valve when they give the orangutans access to water for showers and drinking. Most likely, Congo waited for the perfect long, stout branch with some curvature to arrive in order to get to the plumbing! He certainly looked very pleased with himself when he played with the broken piping, closely inspecting the valve and turning it around and around.

Congo’s journey towards a free, independent life in the forests of Borneo has been a difficult one. Despite various setbacks, Congo gained experience and perspective. Now that Congo has gone through some awkward and difficult moments in the wild, we hope his next return to the wild will be “smooth sailing” all the way!

If you want to support OFI in our efforts to secure and protect forest to give Congo and other orangutan orphans like him a new, permanent home, please consider donating to OFI’s Orangutan Legacy Forest.