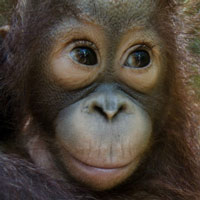 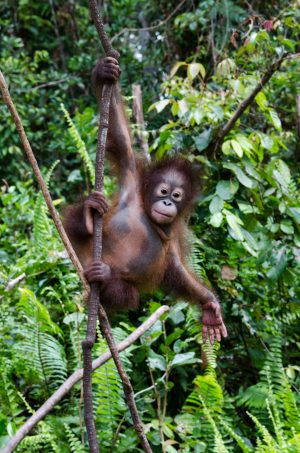 When I arrived at the Care Center more than six months ago, Ben was the smallest infant in OFI’s care. He always seemed a little timid, and when he was taken into the forest, he was often too afraid to explore the trees. Instead, he liked to cuddle up in a caregiver’s lap where he felt safe. This was typical of an orangutan infant his age.

Only months later, Ben has grown considerably and he has almost caught up in size with some of the other babies. But little Ben has not only grown physically, he has also gained a lot of confidence and independence! He now very much enjoys climbing trees, and loves to play with his orangutan friends.

Ben arrived at the Care Center as a small but healthy baby. We do not know much about his past except that he was kept as a pet until his owner handed him over to the wildlife authorities in the nearby town of Sampit, who then brought him to OFI’s Care Center in Pasir Panjang. At the Center, Ben immediately started drinking lots of milk, which allowed him to gain weight and grow quickly. He adapted well to his new environment, and up to today, Ben is a baby that overall causes little trouble. When he receives his milk bottle after returning from the forest, he prefers to hold it himself (indeed, he will push his caregiver’s hand away if they try to help!), and once he has finished drinking, he often immediately goes to sleep. 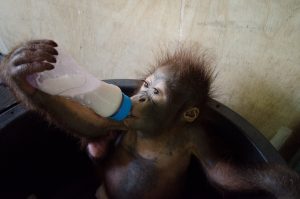 At the infant nursery facility, Ben is most content resting in his sleeping basket or calmly playing with his friends. If he is handed a baby toy, he sometimes plays with it for a short while but often he just drops it. Human-made, synthetic objects are clearly not something that excites little Ben. He rarely tries to raid supplies or empty backpacks like some of the other babies whose mission sometimes seems to be turning the facility upside down! All in all, Ben is an adorable baby who is well liked by all the caregivers. But Ben himself has his preferences. When he is handed over to a caregiver he does not like very much, he will start crying and fighting until he is allowed to return to the caregiver he likes most.

On most days, the infants are taken out to the forest behind the nursery facility. Some are very timid and spend almost all of their time in the caregiver’s lap, and even if they move a little bit away, they often hold on to their caregiver with one hand or foot. This exact behavior is also commonly seen in the wild with infant orangutans and their mothers. Infants are very rarely outside of range of their mothers grasp. When I first met Ben, he showed just this behavior. He felt most confident close to his favorite caregiver, and when he was left alone for a brief moment he immediately started to cry and to crawl back towards his caregiver as quickly as he could. 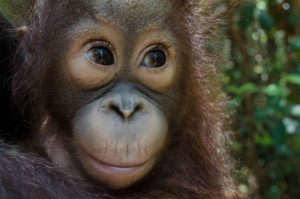 Sometimes, one or two of the small infants join the larger infants at the playground. Last year, when I saw Ben on one of his initial outings to the playground, he did not enjoy himself at all. Even with his caregiver sitting right next to him, he was too afraid to explore the climbing structures, and he was so afraid of the larger infant orangutans that his caregiver, Ibu Diyan, had to carry him around all the time.

Today, those days of fear seem long gone. When I saw little Ben again at the playground a few months later, I almost didn’t recognize him because his behavior had changed so much! As soon as he arrived in the day release forest, Ben started climbing trees. He is very determined to practice this important skill and will often climb up very high. But even when he decides to come down, the fun is not yet over. He loves playing with leaves, branches, and everything else he can find on the forest floor. In contrast to manufactured baby toys, playing with these natural objects can keep him busy for a long time. 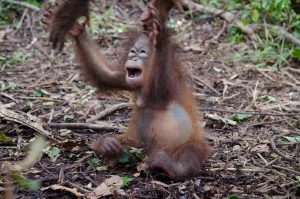 But lately what Ben seems to enjoy the most are interactions with the larger infant orangutans. When one of them approaches, he often moves in their direction and tries to convince them to play. His favorite activities include wrestling matches, which are quite fun to observe between two orangutans of vastly different sizes. Most of the time, the older orangutan infants seem to know they have to be gentle with little Ben. However, I once observed a slightly older orangutan Lia getting a little bit rougher, pushing Ben’s head to the side in a way that prompted the caregivers to pull her away from Ben. But Ben himself did not seem to mind at all. He followed Lia and wanted to continue the wrestling match!

In only a few months, Ben has settled into life at the Care Center and made amazing progress towards natural growth and happiness. It seems that he has understood that the Care Center is a safe place for him to learn and play. He knows that even if his specific favorite caregiver is not right next to him, someone else is always there to help and comfort him if needed.

(Click on the photo above to watch a video about Brave Litte Ben!)

Ben is still a small infant and when I watch him in the forest I often wonder what the future will hold for him. At birth, orangutan babies weigh around one kilogram (2.2 pounds). Adult cheek-padded males weigh as much as 150 kilograms, meaning that little Ben has the potential to gain up to 150 times his birth weight! Had he been allowed to stay with his mother, Ben would have grown up very differently, learning all essential survival skills over the first 8 years of his life just from her in the forest. Although we will never be able to replace this one on one learning from his mother, we are doing our best to create an environment in which Ben can grow both physically and mentally and learn the skills his mother would have taught him in the wild. Even though Ben is very smart, it will take him many years to learn all he needs to know to survive alone in the wild. At the same time, Borneo’s lush rainforests continue to disappear at an alarming rate. It should be every orangutan’s destiny to roam freely through the forest. We very much hope that by the time Ben is ready to go home to the forest, where he belongs, there will still be stretches of primary rain forest left on the great island of Borneo.

You can help by fostering an orangutan like Ben

Orangutan of the Month: quirky Rangda