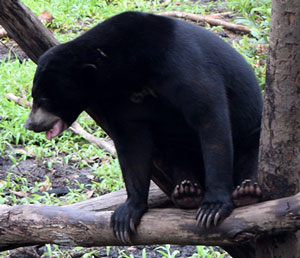 Some sun bears are instantly more recognisable than others, Ori is one of them, with his big head and wide set eyes. He sports a white bib like chest patch. During morning feeding he bounds into the communal area with gusto, requiring much “fuel for the fire” for the day to come.

At the time of writing Ori is approximately five years of age, moving forward towards the prime of his life. He was brought to the Care Center as a young cub by Dr. Galdikas and a Forestry official from Lamandau Reserve where Ori had been simply released (not by us) and was not doing well.  Ori was shy and malnourished. Ori was checked over and considered a prime candidate for rehabilitation. After passing a health check he was taken to a site deep in the forest on the eastern edge of Tanjung Puting  to begin work on rehabilitating him back to the wild. A radio tracking emitter was implanted as well so his movements could be followed once he wandered into the forest away from the tiny camp we had set up for bear rehabilitation.

It takes time and patience to rehabilitate a sun bear. The caregiver must be dedicated and willing to spend a long continuous period of time in the forest. The caregiver will walk with the bear every day, to deter any predators, and keep the bear secured at night. This pattern is repeated with the bear being released every day until the bear/human bond is gradually broken as the bear grows. The bear spends more time alone in the forest, having learned to survive on his/her own. The success rate of this is difficult to measure. It is believed that successful rehabilitation and release of Malayan sun bears is less than 20% with bears either not surviving or not thriving in the forest. Unfortunately, sun bears are also often poached for their body parts to sell as various forms of Chinese medicine.

Rehabilitation for any animal can be difficult, particularly for male sun bears. A suitable area needs to be found; sun bear ranges, especially for males, can be quite vast. They are competitive and in the wild will sometimes fight each other if a bear trespasses into another’s territory. Death may be the outcome. Ori was an example of a bear’s rehabilitation cut short when his caregiver left the project some months into Ori’s rehabilitation and a suitable replacement couldn’t be found. Unfortunately, local poachers had entered the area where Ori and his rehabilitator were ranging and the rehabilitator became involved in tracking the poachers. There was a point of no return for Ori. He was too habituated to humans and putting him back into the wild could have led to potential human bear conflict. Or Ori could have been killed for his body parts. With little choice and a heavy heart, he was brought back to the Care Center to stay long term.

Upon Ori’s return he met his future best friend, Komet. Komet could provide him with social enrichment and stimulation, to help keep Ori from becoming bored and to distract him from thoughts of the wild. After the successful construction of a one hectare (2.5 acres) forest enclosure for bears Desi et al, thoughts turned to creating another forest enclosure for the other bears at the OFI including Ori. So another forest enclosure (once again thanks to the efforts of bear volunteer Patrick Rouxel) was erected to initially house the pair of then adolescent bears, with room for more male sun bears. Eventually Bonnie and Chico joined Ori and Komet creating quite the energetic group of adolescent male bears.

Ori is definitely the leader of the pack in the boys’ enclosure; he likes to play rough and with his best friend Komet and Bonnie he does so. Chico is a bit younger so Ori doesn’t attempt to play rough with him. The enclosure is surrounded by cement but this doesn’t stop Ori trying to dig it all up.

One eye always has to be kept on Ori as he is a very smart bear. For example, he is very attentive and knows where the locks on the enclosure are located. He sometimes even pokes his paw through to see if he can open the gate himself. During cleaning he enjoys getting hosed down and taking great big mouthfuls of water. He will put his face in the way of the hose, open his jaws wide, and let the water spray straight in. It doesn’t matter that there is a water barrel and a small pool for him to choose from; he likes the hose. Care has to be taken as he enjoys reaching out to grab things with his paws and mouth and more than once a hole in the hose has had to be patched up.  On a warm day he enjoys resting up on the platform, legs akimbo and catching some rays.

Ori loves termite nests from the forest. When they are provided he will carry a nest to a secluded area of the enclosure. Here he will roll onto his back and hold the termite nest aloft with his four paws. The termites rain down from the nest onto his tummy where he will pick them off with his long tongue shooting out hungrily.

Ori enjoys similar types of enrichment on offer also, such as plastic balls. These are the size of bowling balls and are stuffed with leaves along with nuts, fruit, and filled with intriguing smells of honey and peanut butter. There is only a small hole for the food to come out of and the bears can’t break through the plastic with their claws, so they have to make more of an effort poking their claws and tongue into the balls or shaking them around to dislodge the food. Ori uses the same trick he does with a termite nest, resting on his back, rolling the ball around and trying his best to shake the contents out.

Like other bears the sun bear sense of smell is incredible, and thought to be several thousand times better than that of humans. Ori is always using his nose to detect new smells. He can be heard taking in great sniffs, drinking it in, and seemingly committing the smell to memory. When breaking into a passion fruit he uses his nose to press down on the fruit until it breaks so he can lick the juicy fruit from within.

Ori is always willing to “entertain guests,” if someone is near. He will lean back and start suckling on his left or right front paws for attention and implore you to scratch his back. He is always sad to see people leave. Ori has settled in at the Care Center well. We will continue to make sure Ori can have the best life possible and the wildest that it can be.

Charming Cabang: Orangutan of the Month