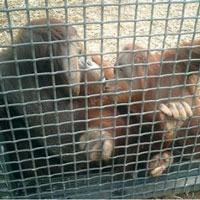 Rusti, a 24-year-old cheekpadded male orangutan, owned by Orangutan Foundation International (OFI) and brought to the Honolulu Zoo some years ago for a temporary stay, will now stay in Hawaii permanently. Mayor Jeremy Harris and OFI President Dr. Biruté Mary Galdikas signed an agreement between the City of Honolulu and OFI on February 13, 2004 in front of Rusti’s current cage at the Honolulu Zoo. OFI will build an Orangutan Habitat consisting of a large open-air enclosure of several thousand square feet around a tall magnificent banyan tree that will provide Rusti with a sanctuary-like facility on Zoo grounds in a lush area with breezes from the ocean.

After the signing ceremony Mayor Harris fed Rusti an edible lei of fruits and vegetables made by Chris Kehlor. Rusti eagerly ate the tangerines, dried apricots and pineapple from the lei but only accepted the celery sticks once the Mayor dipped them in peanut butter. However, like many people do, Rusti totally rejected the broccoli.

Ever since his arrival in 1997, Rusti has been one of the most popular animals at the Zoo. “All you have to do is see the faces of the children to understand that truly Rusti belongs in Hawaii”, said Mayor Harris.

OFI worked diligently for seven years to keep Rusti in Hawaii, initiating efforts to build an orangutan sanctuary on the Big Island and later at Kualoa Ranch in one of the most beautiful spots in the world on Oahu’s Windward side where parts of many films, including Jurassic Park, have been shot. However, these plans did not work out. In the new facility to be completed within the coming year, Rusti will have a magnificent banyan tree, lush foliage, grass, and limited viewing hours, enrichment trained volunteers, his own dedicated keeper all provided by OFI and will remain in the ideal tropical climate of Hawaii which is very similar to the climate of Indonesia and Malaysia, countries to which orangutans are endemic.

Rusti was rescued from a closing zoo in New Jersey where he was housed in a small enclosure with one small scratched plexiglass window as his opening to the outside world. His current cage at the Honolulu Zoo is six times that which he had in New Jersey. OFI hired a keeper last year trained in the welfare, care and maintenance of orangutans and also to provide Rusti with five hours of enrichment each day.

Rusti has a very mellow and charming personality and has enchanted the people who have interacted with him. He occasionally displays and gives forth the “long call”, the characteristic long-distance vocalization of adult male orangutans in the wild. He weighs approximately 300 pounds, has almost perfectly round cheekpads and long red hair that flows from his arms almost like a cape. He is an absolutely magnificent specimen of an adult male orangutan.

Rusti has become a celebrity in Honolulu. His plight in not having a permanent home resonated and became major news. A color cartoon on the front page of the daily newspaper recently pictured a homeless Rusti pushing a shopping cart down a city street. Letters to the editor debated various issues concerning Rusti’s situation. A recent letter from a former Honolulu Zoo Director supported keeping Rusti at the Honolulu Zoo and offered to make a contribution for that purpose! So it was not surprising that the signing ceremony on February 13th attracted a crowd of dignitaries, visitors, zoo keepers and Rusti “fans”. One of the audience members said that she had been “sleepless” with worry after hearing last January that OFI’s plans to build a sanctuary in Hawaii had come to an end and OFI intended to move Rusti from Hawaii to the mainland. One of Rusti’s zoo keepers, Tyris Perreira, had a wide smile on her face as she gave Rusti a fruit drink, saying that she was delighted that Rusti would stay and have a new facility built for him.

Dr. Galdikas thanked Mayor Harris and the City of Honlulu “for the kindness shown to Rusti all these years” and spoke of the personhood of great apes, stressing their genetic closeness, their capacity for rational thought and ability to solve problems, the similarity of their emotions to those of humans, their ability to recognize themselves in mirrors and the fact that they suffer pain very much like people. Galdikas also commented that “One of the things that makes Honolulu so dear to me is that the people of Honolulu have recognized Rusti’s personhood.”

Rusti, an offspring of two zoo animals is a Sumatran/Bornean mix. Unfortunately, a mix did not fit into the Zoo’s masterplan to house “genetically pure” Sumatran or Bornean orangutans. This nation wide zoo policy of breeding only genetically pure animals also resulted in Rusti being vasectomized so that he could not be bred. OFI’s Honolulu attorney remarked that “In Hawaii Rusti will be affectionately referred to as a “Hapa” Orangutan (Hapa being a local term for an individual of mixed heritage) and as such is a perfect fit with the local community!”

He was born in the Woodland Park Zoo in Seattle, rejected by his parents and bullied by other orangutans. Consequently, he spent much time with human foster parents who helped raise him. Eventually he was sent to a private zoo in Scotch Plains, New Jersey, a zoo that was later closed down by New Jersey Fish and Game.

OFI acquired Rusti in 1997 as the private zoo was closing and Dr. Biruté Mary Galdikas flew with him to California. After a brief stay at the Los Angeles Zoo, Rusti was flown to Hawaii. The Honolulu Zoo accepted Rusti for a temporary stay while strenuous attempts were made by OFI, and particularly board member Steve Karbank, to establish an orangutan sanctuary in Hawaii. When plans for a sanctuary were finally abandoned, Rusti was going to be shipped back to the mainland. But through the vision of Honolulu municipal officials, particularly Mayor Jeremy Harris (a biologist and dedicated environmentalist), City Director Ben Lee, and Barry Fukunaga, head of Enterprise Services, the City offered land for Rusti’s sanctuary-like Habitat to be built within sight of the ocean and with views of Diamondhead in the Honolulu Zoo. Two days after the signing ceremony Mayor Harris introduced Galdikas and a local leader crucial to the negotiations that produced an agreement, attorney Sherry Broder, to a large crowd at the City’s annual Brunch at Waikiki and thanked them for their work on behalf of orangutans and Rusti. The crowd roared its approval.

OFI is grateful to the City of Honolulu, Mayor Jeremy Harris, City officials including Zoo Director Ken Redman who had the compassion to accept Rusti when there was no other home for him, and to the people of Honolulu for accepting Rusti into their hearts and their willingness to offer a location to establish a new Orangutan Habitat in Honolulu.

As Dr. Michael Hutchins, Director of Conservation for the American Zoo Association, commented last week “It’s a win-win situation for everyone!” Especially Rusti who will now be able to climb in a real live tree for the first time in his life and the children of Hawaii who can visit him for many years to come.