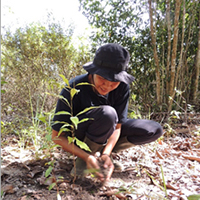 Despite all the attention paid to the destruction of tropical rain forests throughout the world, deforestation has continued unabated over the last few decades. This is particularly true in Borneo where OFI has been working to protect and conserve wild orangutan populations and their only habitat, tropical rain forest, for almost fifty years. We have had much success but despite our best efforts and the efforts of government agencies and indigenous Dayak communities throughout the island, deforestation has been somewhat slowed down but certainly not halted.

Currently less than half of the tropical rain forest of Borneo, primary orangutan habitat, remains. But many of these remaining forests are badly degraded and fragmented. The devastating wildfires of 2015 caused immeasurable damage and led to significant loss of essential orangutan habitat. The impact was so substantial that, after the fire, in 2016 the status of Bornean orangutans was upgraded to critically endangered. Then in 2019 the fires struck again, demolishing more critical orangutan habitat and causing thousands of acres of forest to be destroyed. As in previous years, OFI vigorously fought the fires of 2019, successfully limiting the damage to much less than what was affected in 2015.

Many years ago, our work was essential in convincing the Indonesian Forestry Department to establish Tanjung Puting as a National Park. We have continued to help safeguard the millions of acres in the Tanjung Puting area from illegal deforestation even as those forests and those in the surrounding areas continually face increasing threats from
wildfires.

As the impacts of climate change push the world’s forests to the brink of annihilation due to longer and longer fire seasons, coupled with an increasing agricultural presence, the deadly seriousness of the challenge to restore Borneo’s forests makes our work even more urgent.  Let’s face it: the future of the orangutans, the forest, humankind, and the planet that we all share are inextricably intertwined.

OFI has been working to restore forests with tree-planting and re-wilding programs not only in Tanjung Puting National Park, but also in areas outside the Park in order to provide wildlife with forest habitat and wildlife corridors near villages and plantations for orangutans and other native wildlife to use.

In 2017 we launched our Reforestation program, not only to restore Bornean forests in an effort to preserve orangutan habitat, but also to assist in efforts to combat the effects of global climate change.  OFI’s work protects the remaining carbon stores in peat swamp forests devastated by wildfires. We do this through the cultivation and growing of native seedlings for the purpose of replanting in the affected areas. That first year we planted 15,000 seedlings but in the last two years, with your support, we increased that number to over 300,000 seedlings planted at ten different sites in and around Tanjung Puting National Park.  These selected locations can be former illegal logging sites, former agricultural fields, past palm oil plantations, as well as previously burned forest.

We must preserve and restore the forests of Borneo in order to save the orangutans for whom we all care so deeply and to help ensure that our own future on this earth continues unimpeded.

We ask for your continued support of OFI’s reforestation and re-wilding efforts.  With your help we can hire more personnel and increase the number of staff dedicated to cultivating more seedlings, increasing the number of plantings, and monitoring planted seedlings and saplings. We can contract more villagers to find more seeds and seedlings in the old primary rain forest, so we have more to plant.  We can buy more equipment for planting and buy small vehicles for transporting staff and thousands of seedlings and saplings to the planting sites. With your help we can help restore these magnificent forests to their former glory and provide resource-rich homes for wild orangutans.

I am asking you to make a special commitment to not only the orangutans, but also to humanity’s future by helping to preserve, replant, and re-wild one of the most unique ecosystems on earth.