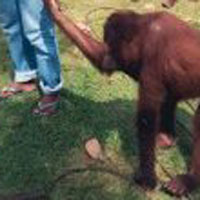 Arriving at the Orangutan Care Center and Quarantine (OCCQ) facility one morning from Pangkalan Bun by the customary Indonesian transport of an ojek or hired motor scooter, I was surprised to find the clinic very quiet. As I ventured around the building I discovered the veterinarians and assistants all busy on the back lawn with some adolescent orangutans. Dr. Rosa and Dr. Andri explained that Dr. Galdikas was to arrive soon. In anticipation, they were doing health checks on a group of orangutans that would be released.

I watched as various orangutans and caretakers walked hand in hand from the night enclosures, like preschoolers going off to school. They then sat and lay on the lawn as many measurements and samples were taken. At the end, the best part for the orangutans was the reward of a syringe full of milk squirted into their mouths so the doctors could examine their teeth and confirm their ages!

Later in the week we all gathered with Dr. Galdikas at daybreak. Again, on the back lawn, the same seven orangutans were led from their night enclosures to a large transport cage. All the while, their “surrogate parent” or caretaker who they’d been raised by stayed with them to comfort and guide them. Loaded into two small trucks, our journey began to Lamandau Nature Reserve where the orangutans would be released. Following a potholed road, we crossed a bridge over a wide canal to stop at a wooden platform. The two orangutan cages were then unloaded from the trucks and then each carefully lowered ten feet down to a rocking kletok (a long wooden boat with an internal motor) on the water below. A curious group of uniformed school children gathered at the strange procession. I am sure for many of them it was the first and maybe only time they would see a live orangutan. Many knew about orangutans because of OFI’s education programs that travel to numerous schools to teach about conservation efforts to save the disappearing orangutan and its forest home.

Heading out of the canal, the waterway opened up to the expansive Lamandau River and its forested borders. We motored up river until we reached the tributary and guard patrol post at the entrance of the Lamandau Nature Reserve, a former logging concession that Dr. Galdikas was able to have set aside as a protected area for orangutans.

As we passed the thick trees dotted with curious macaques and strange proboscis monkeys, it wasn’t long before the trees and pandanus grass suddenly disappeared. A stark barrenness and ugliness suddenly gave evidence of the logging. Instead of the lush, varied tropical forest there remained something of a war zone. The bare earth was blackened and dotted with the charred remains of tree trunks and a few spindly saplings. It shocked my senses to see such destruction and it continues to mystify and trouble me that humans can do such devastation. War is horrible, whether inflicted on other humans or nature.

On the left bank suddenly appeared the white and blue trimmed buildings of Camp JL. We cut the boat engines and glided to shore where we were met by the camp staff. While the orangutans were given water, we enjoyed a cup of hot sweet tea before they were walked out of their cages. Following a trail of wooden planks that bridged over the swamps, some of the orangutans rode piggy back while others insisted on walking by hand.

Out of the forest our little parade marched. As we went on our precarious trail, other ex-captive orangutans materialized out of nowhere to join us. Upon reaching the feeding platform, bananas, sweet potatoes, and sugar cane were spread for the “soft release” of our charges. They ascended up the platform steps, only to quickly grab a handful of bananas and leap for the surrounding trees and lianas. Soon the sparse forest where many orangutans practiced their acrobatics and nest making, was swaying with them movement of the excited orangutans. It wasn’t long before all the released orangutans and their new friends disappeared into the forest. I suspect after a full day of exhilaration and the journey, they were off to make a nest and take an afternoon nap. Many of the seven orangutans had spent several years at the Care Center where they had been brought back to health and patiently allowed to grow and mature.

It is through the dedicated compassion and hard work of Dr. Galdikas, OFI staff, and volunteers that orangutans are successfully being rehabilitated and released back into the wild. Without funding and diplomatic, supportive relationships, the Orangutan Foundation International would not be able to do the orangutan and habitat conservation it does. Instead of a nightmare of suffering and death for the many confiscated orangutans, many can return to the forest and live normal lives.

Orangutan of the Month: Victor

Back to the Trees, an OFI Release