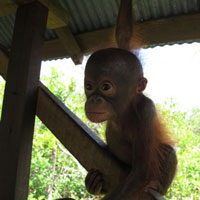 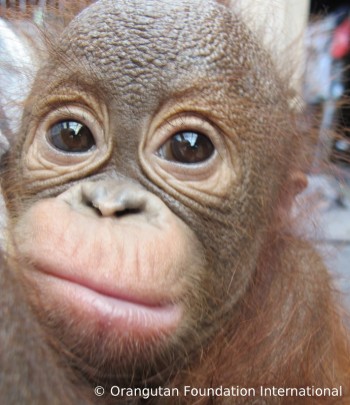 I am so pleased that I was able to choose Luna as my first Orangutan of the Month. Luna is a very small, one-year-old orangutan who looks more like a newborn infant but with teeth! Luna first came to OFI’s Care Centre and Quarantine (OCCQ) in June. She was confiscated by the Forestry’s Department of Conservation and Natural Resources from a palm oil plantation worker who was keeping her as a pet. Most likely, her mother was killed while in the plantation looking for food. Luna did not receive adequate nutrition resulting in stunted growth. She will likely always be smaller than orangutans her own age. She also likely suffered long-lasting emotional damage from the improper care she was given. Upon arrival at the OCCQ, Luna started receiving proper care and nutrition and has begun to flourish and grow – but she still has a long way to go.

I first met Luna at a playground near the nursery where the infant orangutans build strength, hone coordination, and improve climbing skills. I was surprised to notice that Luna had climbed to the very top of the structure and was the highest of all the youngsters! Her body is about half the size of the other infant orangutans so it did not take long for little Luna to tire from her excursion. While the other infant orangutans continued with their play, Luna was soon sound asleep in the arms of her caregiver. 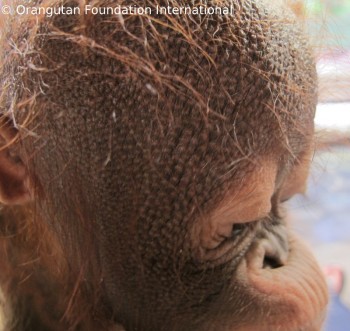 Luna spends most of her days at the nursery sleeping. Because she is so small, she does not have the energy that the other infant orangutans have. When the little ones are taken out to the forest, Luna usually goes along in a sling so she can sleep while her caregivers have their hands free for the other infants who require a lot of attention. On rainy days, she is wrapped in a blanket or sarong to keep her warm because she doesn’t have much hair or body fat. Most days she wakes only for her bottle of milk and a few rambutans and is quickly off to sleep again. Almost as soon as Luna falls asleep, she enters the deep sleep where rapid eye movement (REM) occurs. REM sleep is indicative of dreaming. As Luna sleeps on my chest, I wonder if she is dreaming about growing big and strong so she can return to the forest someday. Or perhaps she is dreaming of being back in her mother’s arms. Who knows? The important thing is that she is warm and safe and able to dream. 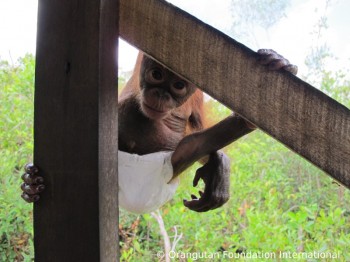 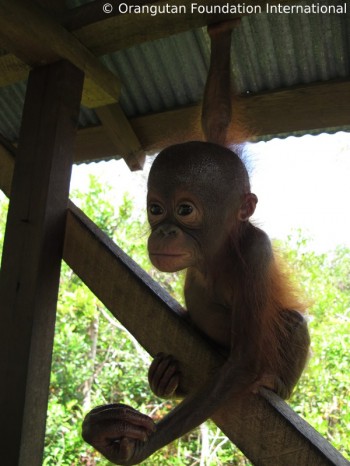 When Luna is awake, she is very alert and very aware of her surroundings. She doesn’t make much noise except for the occasional squeak when she thinks that she might be slipping from her caregiver’s grip or lip-smacking noises when she eats a treat of rice. Loud noises often startle her. She is not particularly fond of thunderstorms; she twitches and jumps awake during ground-shaking booms and cracks of thunder. Since part of her rehabilitation is for her to learn to do things on her own, she is sometimes placed in a laundry basket with blankets, stuffed animals, a bottle of milk, and some fruit so she can get what she needs herself. If she is feeling adventurous, she will climb out of the basket to have a look around, and when she has had enough, she climbs back down to the basket for a nap. 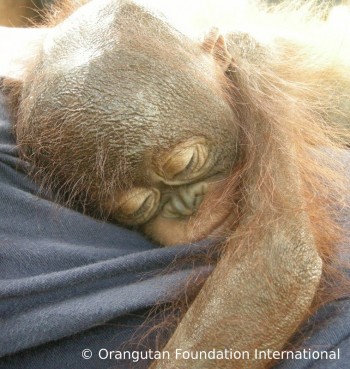 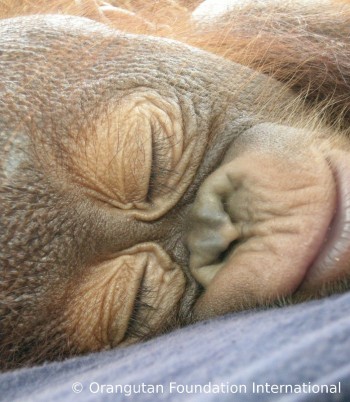 Luna holds a special place in the hearts of staff and volunteers (including me). She receives medication daily under the watchful eyes of Dr. Prima and Dr. Popo, OFI’s veterinary staff, who closely monitor her progress. Her sweet, gentle face holds the promise of a bright future. Luna has a lot of catching up to do to but for now she has what she needs: a warm bottle of milk; a safe place to sleep; the chance to grow; and most importantly, love.

You can help Luna and other orangutans like her by fostering an orangutan. 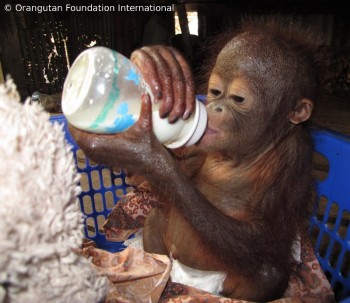 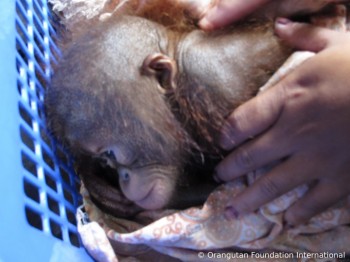 Orangutan of the Month: “Pola”