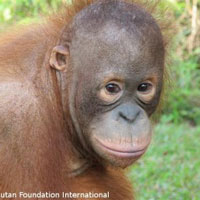 All Hail King Lear! He may not be king of the forest, but he is king of the playground! At six years of age, Lear is quite the character! I have spent some time at the playground where five and six year old orangutans play and I can tell you there is something special about Lear. He is handsome, in a goofy sort-of-way, and is always up to something. At Lear’s age, most orangutans are a bit naughty; like children, they are always testing boundaries. Lear is always trying to steal the show; he is quite the clown. Lear never goes unnoticed! Never shy, Lear must always be the centre of attention.

Lear has spent almost his entire life at the Orangutan Care Centre and Quarantine (OCCQ). He arrived as a four-month-old infant weighing only 6.2 pounds (2.8 kilograms). He was captured by a logger who cut down the tree where his mother had made her nest. No doubt, his mother was killed after the tree was felled. We don’t really know but we can assume it was so.

He is now six years old and weighs 35.3 pounds (16 kilograms). He is just a bit small for his age compared to one or two of the other wild born ex-captive orang-utans at the Care Center but is happy and healthy. In the wild he would be a big boy for his age. In a few years he will be ready to survive in the forest on his own. Until that time comes, he still has many things to learn. His classroom is a large playground where he practices climbing and swinging in a safe environment. Part of his learning involves making mistakes. He often falls to the ground after missing his target or losing his balance while locomoting on the rope and tire swing “canopy” we have provided in the play area. He takes his missteps in stride and always gets back up to try again. The play area is a great place for him to make these mistakes without getting hurt. Encompassing the play area is a large field of small trees. This growing forest allows Lear to wander, investigate, and gain independence all within eyesight of his caregivers.

There are definitely two sides to Lear: naughty and nice. He reminds me of a Mother Goose Rhyme my mother used to say to me:

There was a little girl who has a little curl
Right in the middle of her forehead;
When she was good, she was very, very good,
And when she was bad she was horrid.

Although he is neither a girl nor has curly hair, this nursery rhyme suits Lear to a tee. Lear can be the sweetest little orangutan. Lear likes to leave his friends in the play area to visit with you. He climbs up into your arms and snuggles tightly. He is gentle, loving, and seemingly innocent. But that is not the case! Just when he has you where he wants you, he grabs your hair and gives a powerful tug. He is fond of elastic bands used as hair ties and that is his way of getting them. I’m sure he must have a secret stash of hair ties somewhere! After pulling your hair, he comes in for another snuggle and the cycle continues. Lear will grow out of this behavior as his confidence grows in the forest. His naughtiness is a characteristic of his age.

Lear’s best friends are Alexander and William. Although there is a two-year age difference between Lear and his friends, they are a close match in size. The boys sometimes spend all day at the play area practising their fight skills. Fighting is an important part of a male orangutan male’s life. Once male orangutans reach puberty, they will begin their quest for dominance by sparing with other males. Winning fights is how male orangutans climb the hierarchyl ladder to become the dominant male of an area. When Lear reaches this age, a fight with another orangutan could have serious consequences but for now, it is just play. The boys approach each other with open mouths otherwise known as orangutan “smiles”. Their silent battles tell us that no one is getting hurt. They often stop for a breaks and to re-think their strategies. After a moment of rest, they are back in the ring!

Lear is currently in the OFI’s orangutan fostering program. If you are interested in fostering Lear or one of his friends, please visit the Foster an Orangutan page. Each foster parent kit includes a bumper sticker, a poster, an orangutan photo/bio, an activity worksheet, an information packet, postcards, a Camp Leakey sticker sheet, an OFI brochure and an OFI volunteer team brochure. You will also be sent updates with current photos and stories of “your” orangutan’s growth and progress. Without the generous donations of OFI supporters, orangutans like Lear would not have the opportunity to eat well, play, learn or return to the forest. I have no doubt in my mind that Lear has what it takes to someday become a king. But for now, I will just call him Prince Lear.

Orangutan of the Month: “Pola”