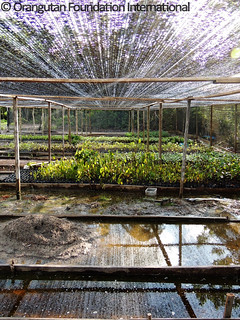 Orangutan Foundation International (OFI) is preparing to launch one of our most ambitious projects yet. We have taken on the enormous task of reforesting the areas of the Orangutan Legacy Forest that were lost in the devastating fires of 2015. One of the key components of the project, is the sourcing and nurturing of seedlings to be planted at the reforestation site. You may remember this from our Emergency Appeal that was sent out recently in which we asked for your help so we wouldn’t lose a moment in getting started.

The seeds and seedlings that we have been collecting will need time to grow and mature under the watchful eyes of the dedicated reforestation team. To start with, a temporary nursery was set up at the Orangutan Care Center and Quarantine (OCCQ) facility for the first seedlings. 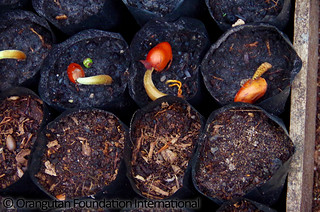 In the long run, however, several larger sites that are capable of accommodating tens of thousands of seedlings each year, will be needed. Fortunately, just down the road from the OCCQ is the OFI Herbarium and behind the herbarium is an area of land the perfect size for a large scale permanent nursery. Construction began on the new nursery a few months ago and OFI is thrilled to announce the final construction has been completed. This new Herbarium Nursery, which will be the first of several, is now up and running!

OFI staff worked relentlessly to complete the construction of the Herbarium Nursery as quickly as possible at the newly chosen site. The rains often halted worked for hours at a time. This could have severely delayed the project had it not been for the many staff members who volunteered to come in on their days off so that the nursery could be completed on time. 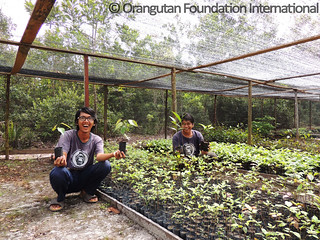 We are proud to announce that over 15,000 seeds have already been planted!

Pak Harits, Pak Bayu, and all of the OFI staff are continuing daily to collect seeds and seedlings and to care for those planted at the Herbarium Nursery until they can be transplanted to their permanent homes in the Orangutan Legacy Forest. 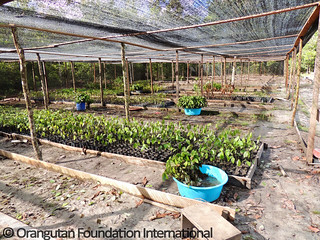 Finding Resilience in the Face of Crisis