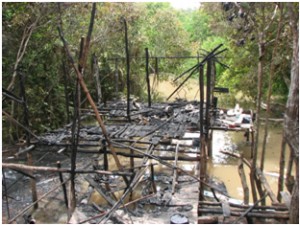 On November 19,2009 around one in the afternoon, a group of 63 Indonesian police officers with two dump trucks supported by Park rangers and Orangutan Foundation International (OFI) rangers moved into an illegal dry ground strip mining area inside the very northern edge of Tanjung Puting National Park and began arresting illegal miners and confiscating their equipment.

This area was close to one of Orangutan Foundation International’s mobile guard posts, called Kuta Laut, which consisted of a large inboard motorboat (the kind that is called “kelotok” in Kalimantan) moored next to a small hut and watchtower on the Sekonyer River’s edge. At about five in the afternoon, the three OFI rangers at the post radioed for help saying that they were being attacked by approximately 25 men with sharpened machetes. These illegal miners had arrived in two boats at the Kuda Laut post, seeking revenge for the mass arrests that had just taken place in the large strip mine up river. 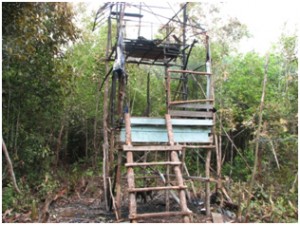 The men burned the watchtower, hut, and boat doing about nine thousand dollars in damage. Outnumbered and outmacheted, our courageous OFI rangers moved back out of harm’s way but remained at their posts.The miners were belligerent and waved their machetes at the rangers but, ultimately, did not harm them.

At the same time in the town of Kumai where many of the illegal miners had families, mobs started forming to protest the arrest of family members for illegal mining. The police responded by putting up numerous roadblocks throughout the town.

At about eight that evening, once the situation in Kumai had cooled down, several OFI rangers accompanied by men from the Sekonyer Village left for the Kuda Laut Post to evacuate the three OFI rangers who had remained with the burned remains of the boat.