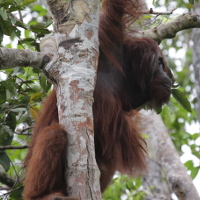 The daily commute back and forth to work is something we can all conjure up in our mind’s eye. Imagine one day if you were on your normal route but found, to your dismay, that it had been destroyed, replaced by something else, and you were forbidden to enter on pain of death. This is what is happening to the wild orangutans of Borneo as deforestation destroys vital wildlife corridors, canopy connections, and forests. This lack of space is causing a struggle for resources as limited food availability drives orangutans away from areas, once pristine jungle, now increasingly occupied by humans, humans who are not willing to share. Once orangutans could move freely through the forest but now wild orangutans must risk their lives simply to survive.

Orangutan Foundation International (OFI) rescues and rehabilitates orphaned orangutans at the Orangutan Care Center and Quarantine (OCCQ) but this is just one side of the work that we do. Another important aspect of our mission is translocation of wild orangutans from dangerous situations to secure locations. Over the years OFI has translocated many orangutans found near or inside palm oil plantations. Unfortunately, plantation owners and workers often see orangutans simply as pests, agricultural vermin that need to be expunged. Orangutans often need to be translocated not just from palm oil plantations but also from small farms and villages. Fruit trees entice hungry orangutans and tall trees offer shelter. Sometimes tall trees overlook villages and cultivated orchards with ripe fruit can be near or in the heart of human settlements.

Fortunately, when this happens people may report these incidents to OFI or to the Nature Conservation and Forest Protection agency (KSDA) of the Indonesian Forestry Department who in turn pass this information along to OFI. The OFI team, once notified, mobilise into action. They arrive in the area and assess the situation. Generally, the team tranquilises the orangutan and this is followed by a health check when blood samples are taken. All of these orangutans are fitted with a microchip implant so that, if encountered again in the future, they can be identified. Some orangutans also have distinguishing marks like a bent finger to aid in identification. It is common practice to name the orangutan at this time. Sometimes wild orangutans are named after the area they were first found.

OFI Veterinarian Dr. Ketut remembers a translocation he attended on Christmas Eve 2016. “The call came in around 5 pm from a plantation company in Sampit,” he says. This is a city located approximately 4 hours drive from the OCCQ. “The orangutan was high up in a tree refusing to move or come down. After arriving around 9pm it took almost 2 hours to tranquilise the orangutan,” Dr. Ketut continues. After being darted, a nimble assistant had to climb up the tree to safely carry the orangutan down. She was only identified as a young female on closer inspection. This orangutan was dubbed “Lyah” after the area where she was initially found. The rescue team finally safely removed her and it was Christmas morning by the time the OFI staff arrived at the OCCQ. The samples were quickly sent for analysis to Java and she was finally released in a safe area near Tanjung Puting during Boxing Day. Not quite your average holiday experience, you will agree.

It is not always this simple. In the past, the OFI rescue team has sometimes arrived to find orangutans attacked, beaten or stabbed. On other occasions even if somebody called a sighting, that person, believing his or her work done, has left the orangutan unmonitored. By the time the OFI team arrives, the orangutan has “skipped town” as it were. He or she could be anywhere up to 5 – 10km away. Usually this becomes a wasted trip. Another problem arises when orangutans sometimes return to the area from which they were translocated. When orangutans are moved from one area to another, their excellent memories often guide them back to the “home” area from which they were taken. In 2018 the body of a translocated cheek padded male orangutan dubbed “Baen” was found dead in the river on the edge of a palm oil plantation. He had been successfully translocated in 2014 but must have found his way back. His body was heavily mutilated with airgun pellet and machete wounds. His body was likely thrown in the river to cover up the crime. The sad reality is that not everyone always calls for the proper authorities to report an orangutan in a palm oil plantation. Whoever killed Baen viewed him as a crop raider, unwelcome pest, or just a possibly dangerous or inconvenient nuisance.

To alleviate and prevent these problems, education is a key component in OFI’s conservation tool-kit. In the past, OFI has voluntarily worked with the managers and staff of palm oil companies to train them on how to manage orangutans inside their plantations without conflict. This work also reaches out to local people and communities. OFI visits schools and runs educational programs to engage school children to ensure the next generation appreciates orangutans, all wildlife, and their home, tropical rain forest.

The work never ends. OFI continues to raise awareness of the orangutans plight nationally and internationally. There is also OFI’s “Protection and Patrol Program” which includes teams scouring the forest, building guard posts, and securing support from local communities to safeguard threatened species, such as orangutans, from poachers and forest from illegal loggers and strip miners.

We can never predict what’s going to happen during a translocation. One memorable translocation occurred some months ago. A mother and her juvenile offspring were brought in late one night from a palm oil plantation and preparations were made to release them the next day. So far, so routine. It was only the next morning that OFI staff realised there wasn’t just 2 orangutans but now 3. The mother had just given birth to a new baby right there in the transport cage! It was imperative to get them back to the wild as soon as possible. They were loaded onto OFI speed boats and transported to a safe area.

When the orangutans come out of the transport cage they usually don’t hang around. Some even help push up the transport cage door as it is opened. They usually leave quickly and return back to the wild. They usually rush up the nearest tree and only when they are at a safe distance do they steal a glance back. They must be thinking it has been a strange 24 hours, almost a feverish dream, but they are clearly glad everything is back to normal.

Translocations touch on almost every aspect of OFI’s ongoing work from education, rescue, release, research, rehabilitation, and reforestation. The odds are stacked against conservation and some days everything can seem hopeless. Other days, as when this mother with her new born baby were translocated successfully or a child’s face lights up with joy when he or she hears a happy story about orangutans, fill us with hope. This is all the more reason for us to never give up and to carry on in our mission to save and protect orangutans and their tropical rain forest home.