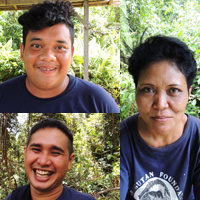 Orphaned orangutans are given a second chance at a life in the wild at Orangutan Foundation International’s Orangutan Care Centre and Quarantine (OCCQ) in Indonesia. After being tragically separated from their mothers who are killed in the process of deforestation, these vulnerable orphaned orangutans are loved and cared for by OFI’s dedicated caregivers. These men and women dedicate their lives to supporting and nurturing these orphans, to prepare them for a second chance to live in the wild.

This month OFI wants to celebrate some of the men and women who spend each day caring for the orphaned orangutans. Without these dedicated staff members, the plight of the Bornean Orangutan would be much worse.

So here is to the OFI staff and caregivers who provide the love and support that the orphaned orangutans need each and every day! Ibu Didit
Ibu Didit also works at the same facility and is Ibu Litik’s older sister. Ibu Didit assists with all aspects of juvenile orangutan care including going into the forest each day with the orangutans. Ibu Didit has a special relationship with the orangutans and is often able to coax a stubborn orangutan down from the tree tops at the end of the day when it is time for the orangutan orphans to return to the safety of their sleeping enclosures. 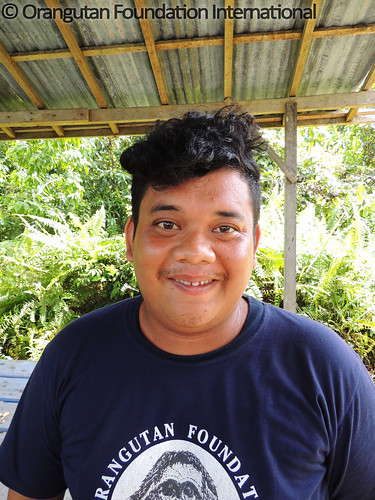 Pak Idai
Pak Idai has worked for OFI for well over 20 years. He is a trusted staff member who first began working at Camp Leakey and then moved to the Care Center. He has done almost every job at the Care Center from being a caregiver to directly assisting our Founder and President, Dr. Galdikas, in the field. Pak Idai’s passion and dedication to the orangutans is inspiring to everyone at OFI. Pak Roso
Pak Roso works with juvenile orangutans alongside Ibu Litik and Ibu Didit. Pak Roso assists with all aspects of orangutan care and is also a part of the OFI Rescue team. He and the rest of the Rescue Team are sent out whenever a wild orangutan needs to be rescued. In addition, Pak Roso assists with the release of rehabilitated wild born ex-captive orangutans and is often part of the team that takes notes and tracks released orangutans through the forest. Ibu Sumi
Ibu Sumi began her career with OFI as an orangutan caregiver. She loves to reminisce about the
orangutans she cared for when she first started working for OFI part-time as a student and celebrates the fact that many of those orangutans are now living freely in the wild. Today Ibu Sumi is the Deputy Manager of the OCCQ and is intricately involved in all aspects of the OCCQ’s operations. Her dedication is admired by all of us here at OFI.